US pension funds have a number of reasons to reassess how and why they invest in real estate. They are becoming more mature, so that their liabilities are becoming greater than their capital inflows. At the same time, the real estate market looks like it is entering a new phase following several years of post-crisis growth. One of the biggest areas of potential change is investment structures.

“Many plans are maturing,” says Dillon Lorda, managing director at Pension Consulting Alliance.  As member populations age, many plans in the US “are coming to grips with the demographic fact that they are moving into a new period in which they will pay out more in benefits to retirees than they will take in as contributions from active plan members”, he says.

The situation is fuelling two major shifts in investing, Lorda says. First, institutions have steadily moved assets into property to offset or replace declining coupon payments from fixed-income portfolios. But some pension plans are underfunded, and still require additional yield to help generate sufficient income to pay benefits years, or even decades, down the road.

At the same time, with the prospect of lower contributions looming, pension managers have less time to recover from losses and must protect existing capital. De-risking has sparked a second shift. To protect the attractive features of real estate – durability of income, asset value protection and modest price appreciation – Lorda says pension managers are becoming more diligent about evaluating investment structures to gauge whether such structures can deliver what they need at a cost they are willing to pay, without undue volatility.

As things stand, there is a mismatch between the need for reliable long-term income streams from stable assets and the prevailing private equity fund model in which much institutional real estate capital is deployed.

The pressure on traditional closed-ended opportunity funds, consultants say, is evident in the increasing time it takes to raise new funds. More frequently, it is the largest existing managers, which can offer top performance in several sectors or parts of the capital stack, that garner the lion’s share of new capital each year. The 10-year time horizon of the typical private equity fund structure does not mesh well with the multi-generational time horizon over which pension funds invest. The opportunistic strategies that most closed-ended funds pursue, seeking high total returns but limited income, are starting to be seen as inappropriate for pension portfolios.

The primary concern is that the fixed lifespan of closed-ended funds creates artificial incentives to deploy capital according to the manager’s schedule and a limited number of opportunities that meet high return goals. Open-ended funds are seen as more efficient structures for capital deployment based on favourable market conditions.

While the investment profile of each pension fund depends on its liability structure, funding status and risk tolerance, Lorda says that, in general, managers are looking harder at closed-ended funds before committing capital, and leaning instead towards vehicles such as open-ended funds and separate accounts that better align with the inherent risk and liquidity needs of pension funds, or which can be structured to reflect the characteristics of specific plans.

These shifts are taking place against a backdrop of torrid activity in the US property markets. Real Capital Analytics, which tracks commercial property sales of $2.5m (€2.3m) and greater, estimates that about $456bn of commercial real estate was sold (excluding entity-level transactions) in the US in 2015 – a 20% rise over 2014. 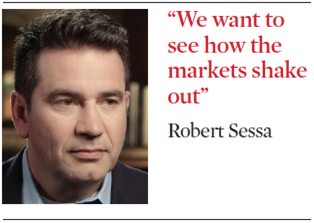 Edward Pierzak, managing director, global real estate at TIAA-CREF, is researching so-called ‘initial yield spread’ – a potential leading indicator for identifying major turning points in property market cycles – based on National Council of Real Estate Investment Fiduciaries (NCREIF) indices. Early in 2016, he says, strong demand from institutions pushed down initial yields in most sectors – except multifamily – to levels below prior cyclical lows. For US property overall, Pierzak says the initial yield indicator suggests moderate risk of a downturn in US real estate within the next four to eight months.

A slowdown would not be a surprise after a long period of strong performance in US property markets. The $25.5bn Employees Retirement System of Texas is taking stock of the situation, says Robert Sessa, director of real estate at the pension fund. “We’ve been cautious for a year,” says Sessa. “A year ago, we were looking at whether the Fed would raise interest rates and what that would do to public equity markets and the fixed-income markets – which is 70% of our overall pension fund – and doing some scenario analysis of how that would potentially impact the denominator.

“Then August rolled around and China devalued. We got the same impact but the cause was different than what we originally thought.”

Now “we want to see how the markets shake out”, Sessa says. In accord with an asset allocation study in 2012 that raised the property allocation to 10%, Texas ERS is already nearly fully invested. “We’ve put a lot of capital to work, so we’re not in any rush to put capital to work right now.

“We want to make sure we get the distributions back from assets the managers told us they were going to sell. We’re not doing first closes unless managers really incentivise us, because we want to wait to see how the funds shape up, and also the general economy and our portfolio.”

Sessa says Texas ERS is “going to be underweight core going forward”. He explains: “Our past capital commitments haven’t been to core, so we haven’t been committing any new dollars to core for about 18 months to two years, and as new dollars get deployed that will be going to the non-core space.”

He says the fund is “focused on some niche sectors that offer good potential for improving the real estate and where asset ownership is fragmented.” Self-storage is one attractive sector. “We’re trying to buy it and bring in institutional operating capability to improve the property. Those are the attributes and the profile of the real estate we’re looking at.”

Sessa adds: “Each structure has a place in the portfolio. It depends on where we are in the cycle, and what you want to achieve with the particular strategy. Certain vehicles are better at deploying capital for certain reasons, and you just have to understand that.

“We’re in some big global funds where I don’t think we could do separate account, so we need to be in a commingled fund. In some strategies, commingled funds make a little more sense; you get better diversification and access to managers.”

Portfolio Advisors created a flexible structure for its Portfolio Advisors Real Estate Fund V, which enabled investors to customise their exposure in the $437m global, diversified fund. Investors were able to select global, US-only or non-US options in any proportion, and they could also allocate all or a portion of their commitments to the secondary/co-investment sector of the fund.

Vehicle structure can also affect performance. One key objective, says Texas ERS portfolio manager Adam Cibik, is to create “the type of structure where we can control exits over time, so exits are not based on an IRR where the manager is incentivised to sell as soon as possible.”

He adds: “A theme we’ve been seeing across portfolios is higher IRRs and lower multiples across the board. That’s more of a negative for us. That control mechanism, where we can really keep our finger on the duration of the investment, can help ensure we’re going to get those returns over time.”

Lorda says some pension funds are starting to apply factor-based allocation approaches to real estate, assessing managers and strategies based on the types of risks they introduce to the portfolio. But it will take time to develop the risk management and other systems required to implement factor-based approaches for property.