The UK government has spotted an opportunity to boost infrastructure investment. But plans to reform the LGPS have big implications for £13bn of property holdings, writes Richard Lowe

In its desire to increase investment in infrastructure, the UK government has had its sights set on local government pension schemes (LGPS), a collection of 101 funds with more than £230bn (€296bn) of assets. Last year, Chancellor George Osborne said the 89 local authority funds in England and Wales would be made to club together to form several “British wealth funds”, each with more than £25bn of assets and the resources to “develop the expertise to invest in infrastructure”.

The plan is not optional. The government is consulting on its proposals for the reform, but the funds themselves are already at various stages of joining the seven or so ‘pools’. Much of the debate has been around the creation of these pools and how they could be structured.

What has not made the headlines is what it all means for the £13bn or so in property held by the funds in a variety of direct and indirect investment programmes.

The government has said it is open to the idea of existing direct property holdings being retained independently of the pools because they are often used for matching specific pension liabilities (see box, Direct investments granted pooling exemption). However, pooling must be used for new allocations. Furthermore, some schemes may choose to pool their existing direct property holdings, and this still leaves their significant indirect exposure. A survey by investment consultancy Hymans Robertson of 41 LGPS funds found that just over half of property assets on aggregate were held through direct mandates (figure 1). 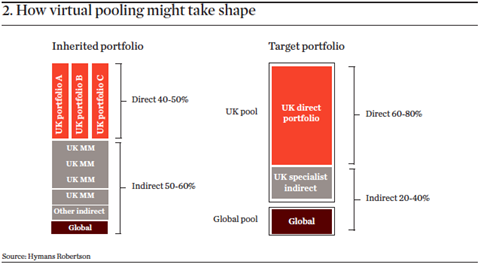 It is too early to know to what extent and in what way the LGPS funds will consolidate their property holdings. But what is clear is that a move away from indirect real estate is virtually inevitable. Cost is one of the four criteria the government will be using to assess pooling proposals, which will favour a direct investment approach.

“I don’t think it will be a complete move away from indirect property,” says Simon Jones, senior investment consultant at Hymans Robertson. “There will still be sectors of the market where it makes sense for the pools to use specialist vehicles or specialist managers to gain exposure. But, would I anticipate that a greater proportion of property assets within the LGPS will be managed directly in the long term? Yes, I would.”

In its response to the consultation, the Association of Real Estate Funds (AREF) highlighted the grey area that exists between real estate and infrastructure as one reason to consider retaining third-party fund management expertise.

The government has accepted that the pooling of direct property portfolios used for the matching of liabilities might not be in the interest of local government pension schemes.

In November, it stated: “In light of the arguments brought forward by authorities and the fund management industry, the government is prepared to accept that some existing property assets might be more effectively managed directly and not through a pool at present. However, pools should be used if new allocations are made to property.”

Kent County Council, one proponent for the exemption, argued: “Whilst the failure of some local authority funds to effectively manage their equity investments is clear and needs to be addressed, the larger local authority funds which have been able to build up highly successful direct property portfolios have demonstrated skill both internally and through their selection of external managers to justify these assets continuing to be managed locally.”

“Many of our member funds are already investing in property assets which are part of the wider social infrastructure – for example, healthcare, retirement homes, GP surgeries, student accommodation and, increasingly, PRS housing,” it said. “What is often overlooked, however, is the extent to which large-scale property regeneration investment can itself unlock infrastructure benefits such as transport improvements or community facilities. Authorities may not have the risk appetite or appropriate skills to undertake such projects directly so, by ensuring that they can deploy capital through funds, infrastructure benefits can be achieved with costs and risks mitigated.”

Hymans Robertson, which advises many of the LGPS funds, helped produce a joint response to the government consultation. The ‘Project POOL’ report includes a section on property and makes recommendations for pooling of the asset class.

It favours ‘virtual’ pools for property because of the potential costs involved in merging such an illiquid asset class. These virtual, or collaborative, pools would enable property portfolios – both direct and indirect – to be merged gradually over time. The report suggests that individual funds could “initially retain relationships with existing managers” and set up a “governing entity” to oversee a “long-term consolidation of assets”.

What does this mean for the third-party fund management industry? Incumbent managers do not face a revolution overnight, but in the long term there will no doubt be winners and losers.

Asked, if LGPS property portfolios will have changed materially in three years’ time, Jones is not convinced. “If you were to say, what might things look like in 10 years’ time, I think you would be looking at a rather different picture,” he says.

“I don’t think it will be a complete move away from indirect property. There will still be sectors of the market where it makes sense for the pools to use specialist vehicles or specialist managers”
Simon Jones

“How quickly can a set of indirect holdings be migrated into a set of direct holdings? Well, not very quickly, if you don’t want to incur some of the round-trip costs of sale and purchase.

“There will be opportunities to start exiting from some vehicles; some will have natural ends to their lifetimes and will lend themselves to cash being redeployed into direct markets. Others might need to be held for the longer term.”

The biggest threat of LGPS consolidation could be to the real estate multi-manager industry. Fund of funds and multi-managers add a further layer of cost to real estate portfolios. The “removal of multi-managers” is listed by the Project POOL report alongside “migration from indirect to direct” and “pooling direct mandates” as one of three means of an expected 28bps cost saving for LGPS funds.

“I think there are certainly threats to the multi-manager industry,” says Jones. “Third-party implementation through multi-managers is another layer of cost that could perhaps be removed. But, again, is it something that is going to happen overnight? No, because there are still portfolios there that need to be managed.”

Any attempts to rush the consolidation and migration to a direct approach “runs the risk of destroying value”, Jones says. “That is the one thing that is not going to be welcomed by any party – removing value by enforcing change simply for the sake of enforcing change.”

Multi-managers may still have a role to play when it comes to international real estate. UK pension funds generally have relatively small exposure to foreign real estate – Project POOL estimates that only 6% of LGPS property holdings are outside the UK – partly because the size and liquidity of their home market provides them with an incentive to maintain a domestic bias. But the consolidation of the LGPS funds has the potential to facilitate greater overseas investment.

The Project POOL report states: “The scale of overseas property assets within the LGPS means that direct investment overseas is unlikely in the near term and any pooling solution will make use of indirect vehicles.

“Whilst an appropriate starting position may be through the use of fund of funds or pan-regional vehicles, over time, the pools could develop the ability to build internal expertise to allow investment in more specialist pooled vehicles and to make co-investments, depending on the overall scale of assets.”

Jones says: “Pooling potentially makes it a little easier for the underlying funds to gain exposure to non-UK property. I still think it likely that the route into non-UK property will be through indirect vehicles rather than pools going out and investing directly.”

Going Dutch: should LGPS look to the experience of ABP?

The experience of the Netherlands provides useful insight when assessing the impact of the proposed local government pension scheme (LPGS) reforms and real estate allocations.

Around half of LGPS property investments are held in direct portfolios, including joint ventures and other hybrids, with the balance held in funds and other indirect holdings. Nearly all this allocation is invested domestically, with only a limited amount (about 5%) in non-UK real estate.

The government argues that the reforms will reduce costs, saving the beneficiaries of the schemes millions of pounds per year and will change the way pension savings are invested. It expects that the multi-asset pools will follow international norms for investment, which means, for example, more investment in infrastructure and housing.

However, the government recognises that it may be more efficient for existing real estate assets to continue being managed directly by the individual schemes, while multi-asset pools should be used if new allocations are made to real estate. The pools, in due course, could be responsible for real estate allocations of £2bn-3bn (€2.6bn-3.8bn).

There is an interesting parallel with – and some useful lessons to be learned from – the Dutch experience. All local and central government employees in the Netherlands participate in one national civic pension fund – Stichting Pensioenfonds ABP, which has an estimated €373bn of assets. ABP’s current exposure to real estate is about €30bn, or 9% of total assets.

ABP was established under statute in 1922 for government employees. In the 1980s the Dutch central government controversially used ABP to balance the government budget, highlighting the different aspirations between the Dutch government and its board. ABP was privatised in 1996 to ensure its independence. Since 2008, APG – an ABP subsidiary – has operated as the fund manager for ABP.

ABP and other Dutch pension funds are required to follow a prudent-person rule when setting their investment strategies: to take into account the best interests of their pension holders and employees, the impact of a particular investment on the fund’s overall portfolio as well as short, medium and long-term liabilities.

In the case of real estate, the funds are responsible for taking careful, considered decisions about key investment characteristics, including preferred product type, style and domicile.

The relatively small size of the Dutch real estate market and the need for portfolio diversification were catalysts for investing in non-Dutch markets, often via joint ventures, non-listed commingled funds and real estate investment trusts. Following the 2008 crisis, APG has looked for more management and control for its client mandates, preferring commitments via joint ventures and other hybrids rather than indirectly via traditional funds.

We suggest that, as a consequence of the proposed LGPS reforms, the multi-asset pools will:

• Focus more on direct when committing domestically – this may result in the schemes reviewing their indirect mandates, especially those mandates with a non-specialist exposure;

• Prefer commitments via joint ventures and other hybrids rather than traditional funds, given the bargaining power of the pools to demand more management and control;

• Increase the commitments to non-UK investments, taking into account the requirement for portfolio diversification.

The reforms may highlight different strategic goals between those of the UK central government and the pools. For example, would the pools support the government’s expectation of greater investment in infrastructure and housing?

The reforms also present challenges to the fund managers who currently service LGPS and those managers who, in time, look to win mandates from the pools.

Maurits Cammeraat (top) is director of professional standards at INREV.
Melville Rodrigues is a partner at CMS