Since 2006, the average real estate allocation among Swiss pension funds has increased by one third and currently stands at around 19%, according to the latest Credit Suisse survey.

The growing appetite for real estate is creating a pressure to find suitable investments.

AFIAA, an investment foundation for Swiss pension funds, is also feeling this load. At the end of March 2017, the AFIAA had 45 pension funds as members and committed funds amounting to CHF1.7bn (€1.4bn). “Around 6.5% of those have not been invested yet,” says Ingo Bofinger, who took over as CEO in January. “We are registering more and more interest from smaller Pensionskassen. They are all in constant need of new investment opportunities as their portfolios continue to grow. They virtually have no alternative.”

Direct investments in real estate are set to double over the next five years to CHF3bn as AFIAA brings new investors on board and reinvests capital gains, while using up to 20% leverage. “We only use debt locally to help hedge currencies like the Australian dollar,” Bofinger says.

AFIAA has begun to offer indirect real estate investments as well, having only previously invested directly since its 2004 inception. Last year, investment group Avadis, which AFIAA has been part of since 2014, hired CBRE Global Investment Partners for the mandate. It is now being transferred to AFIAA and is open to existing and prospective AFIAA members.

“Currently, we are only investing directly in foreign properties but we will add a well diversified indirect fund this year,” says Bofinger. “Some prefer to go global via direct investments because they can see exactly where they are investing. Others like the idea of being highly diversified.”

Last year, the fund set a 4% target allocation for international real estate for the CHF34.5bn open portfolios it is managing. For domestic real estate, the target quota is 7%.

Publica has finalised its selection of managers for its US exposure, which is to make up 50% of the international real estate portfolio. “Currently, we are planning the Asia portfolio with a target exposure of 20%,” Schäfer says. “After that – most likely in 2018 – we will start building the exposure to European properties, which are to make up another 30%.”

Publica is looking for broad diversification and is “looking at all sectors” in these markets, he says. The currency exposure from this globalisation is hedged via an overlay structure.

One sector AFIAA is not seeking to add to its portfolio is residential. In its direct global investments, the collective vehicle will stay focused on office (around 80%), commercial (11%) and niche markets (6%) like hotels or special-use spaces within commercial properties.

“We do not want to add residential properties or other real estate shareholdings, because we want to offer our members a clear investment profile,” he says.

Stephan Kloess, chairman of the investment board of AFIAA and founder of the Kloess Real Estate consultancy, mentions another reason why investors might avoid housing. “Residential is less interesting for many Swiss investors when going abroad because this is their main investment segment for domestic properties,” he says. “The challenge with international residential is also that there are virtually no funds diversified over several countries due to legal complexity in the segment.”

Swiss pension funds tend to stick to office and retail. “Before going into specialist properties, they rather look abroad or change investment styles,” Kloess says. He says “experienced” real estate investors are an exception. “They look at hotels and healthcare objects for diversification.”

“Swiss investors have accepted the diversification effect of international property investments and also its potential to offer additional returns,” says Kloess. But, he points out Swiss Pensionskassen are still a long way from reaching the limit for foreign real estate investments: “Exposure to non-domestic real estate is capped at 10%, but we are not even at one fifth in Swiss portfolios.”

According to Credit Suisse, the average indirect exposure to foreign real estate by Swiss institutions stood at 0.85% of total assets – slightly less than the 1% in the previous year. The exposure to direct foreign properties is at 0.3% and looks to be rising. 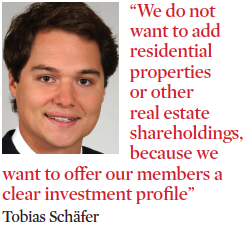 Given the low-interest-rate environment and the search for yield, Kloess thinks the investment framework should be overhauled. “Regulators might reconsider the hybrid character of real estate,” he says. “The capital grow component from the equities and the stable cash-flow component from the bonds.”

As for developments, Kloess says they are mostly domestic and rarely abroad. “Swiss pension funds are solely investing in developments in their own portfolios or to develop properties which are then taken into the portfolio,” he says. “Development abroad is very limited. For additional risk premiums, Swiss investors rather go indirect into value-add than private equity structures for opportunistic investments.”

The AFIAA has set itself a strict risk profile. “We will not go beyond core and core-plus,” says Bofinger. “We want to offer our members added value by not only investing in properties but also actively managing them. Therefore, we are also looking at properties that might have a small vacancy rate or refurbishing needs.”

As an example, Bofinger mentions refurbishments in Sydney and Munich to suit the nee ds of new tenants. “The most important thing for us is a very good location because this ensures that we will always get new tenants,” he says. “Even in times of economic difficulties, a good location will ensure that it is not a question if we will see interest in our property but only a question of time.”

AFIAA – as well as other Swiss and German investors – has found some of these “very good locations” for offices in Australian cities like Sydney and Melbourne.

Sydney is also named as one of the hotspots for commercial investments. “In those cities rental growth is expected as the economic situation improves and demand cannot be satisfied by existing properties,” says Bofinger. 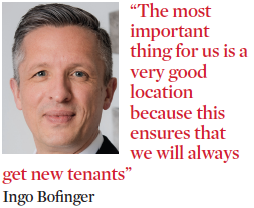 But he says Australia, like any other market, has to be viewed heterogeneously. “In Perth, for example, the property market is down as it is highly correlated to commodities and only interesting for cyclical investors. It has completely different market dynamics to other Australian cities.”

AFIAA’s investments are in Europe (45%), North America (just over 30%) and Australia (24%). It has set up local offices to “stay in close contact with the existing or future tenants” and to discuss changes at an early stage, Bofinger says.

Another trend registered in the statistics, is the increase in infrastructure exposure. According to Swiss consultancy Complementa, the share of infrastructure within the alternatives exposure in Swiss portfolios is growing but still under 1% on average.

“Compared to Great Britain, for example, the Swiss infrastructure market has a lot of catching up to do,” says Sergio Bortolin, CEO at the CHF14bn ASGA collective pension fund. “And this will remain the case for quite some time.”

Investments are “in principle” made globally but ASGA has put the focus on developed markets, says Bortolin. “We invest 15% of the infrastructure portfolio in emerging markets at the most. At the moment, we have general partners which invest in Brazil, South Korea and Slovakia.”

As for developed markets, ASGA is invested in the US, Canada and Germany via third-party fund managers. The domestic exposure is negligible because of the limited investment opportunities, Bortolin says. “Infrastructure projects are still mainly financed by the Swiss state or institutions close to the state. Institutional investors can almost only invest via private market deals.”

But Bortolin adds that it is also a problem of asset management offerings. “There are only a handful infrastructure managers specialising in the Swiss market,” he says. “But, very often those do not have a very long track record.”

The pension fund of Swiss retailer Migros had 1.5% of its assets invested in infrastructure last year. To help increase its exposure and to widen the range of investment opportunities in the market, the CHF22bn fund added secondary market investments to its portfolio. “So far, we have made three fund investments on the secondary markets over the past 12 months,” says the fund’s chief executive Christoph Ryter.

He says “no particular restrictions” have been set for the strategy. “It depends on where we see opportunities.”

Migros is also invested in an infrastructure fund set up by the Swiss IST Investment Foundation. Ryter notes that this investment “only makes up a small part” of the fund’s infrastructure portfolio. “The money we earmarked for the fund has not been fully invested yet.”