With its extensive coastline and seafaring heritage, Denmark is home to much expertise in sea transportation. It was this pool of knowledge that three of the Nordic country’s largest pension funds said they hoped to capitalise on when they announced a large investment in the shipping sector this autumn.

The investment comes two years after Navigare launched its first shipping fund, attracting $450m from investors, including PensionDanmark and Danica Pension. That first fund has now created a $1bn portfolio of vessels chartered on long-term contracts. Jens Denkov, chief investment director of alternative investments at Danica Pension and Danske Bank Asset Management, emphasises that the important thing for Danica is to generate attractive returns for its customers in a sustainable way.

While investing in the shipping sector is in line with this goal, Denkov says it is somewhat different from the pension fund’s traditional investments. “This particular fund allows us to get pure exposure to the shipping market with diversified demand drivers and solid cash flows, because the fund is investing in ships chartered out primarily on long contracts to solid counterparties,” Denkov says.

“We found all of that attractive, and we also get some stability from the longer-term contracts. Plus, asset prices look attractive at the moment.

“We also we found shipping to be a suitable investment for us because of the long tradition of shipping in Denmark. It’s an area where there’s a lot of knowledge gathered in the Danish market, so that made it possible to invest in a locally-based manager with vast experience from a global shipping industry and that eased the due diligence process as well.”

Founded in 2017 by Robert Mærsk Uggla and four experienced shipping professionals, Navigare has its offices next to the sea in Hellerup, north of Copenhagen. Navigare’s team has over 100 years of shipping experience and access to a network of significant deal flow.

For Denkov, the structure of Navigare’s second fund was also an attraction. He says: “This is an unlisted fund, with an investment period of four years, and then the return has to be realised after approximately 10 years,” he says. “With a listed investment, we wouldn’t necessarily get the true underlying exposure to the sector, and this was a cost-efficient way for us to invest – also given the long collective experience of the team and the focus on long-term contracts with solid operators.”

Another plus point for Danica was the degree of gearing used by the Danish fund. “They applied prudent leverage – not anywhere near the levels seen before the financial crisis, and the assets are diversified across segments,” Denkov says.

The sustainability angle of the fund was also important for Danica. “Shipping is a sector where the focus is shifting increasingly towards environmental considerations, and new regulation is entering into force,” Denkov says. “One of the main drivers of this sector is global trade, which contributes to a rising middle class internationally and to getting people out of poverty. And it is also the cleanest sector in the trade sector, with regulations coming in, such as the new rules on reduction of sulphur emissions next year.”

Under these regulations, the current maximum 3.5% sulphur content of fuel will have to be reduced by 85%. As part of this change, Navigare is investing in sulphur scrubbers and in more ‘eco-ships’.

Denkov says the industry has its own objective to halve carbon emissions by 2050. Another environment-related change taking place in the industry is that banks financing ships are introducing the Poseidon Principles. This code establishes a framework for assessing and disclosing the climate alignment of ship-finance portfolios.

“This is also an opportunity for us to improve the green agenda because more capital is needed to bring this about, such as scrubbers, but also to replace some of the vessels currently on the oceans – and that’s one of the attractions for us,” 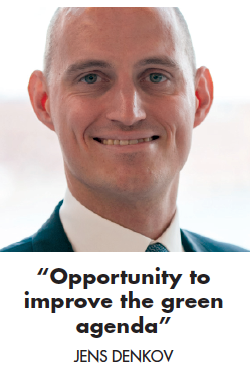 Although shipping is still a small part of Danica’s portfolio, the pension fund is increasing this proportion, but in a controlled way, says Denkov. Shipping plays a particular role within the overall portfolio, he says, with its exposure to global trade with many diversified drivers and direct holdings of property-like assets that are chartered out.

“But, of course, these are depreciating assets which have a typically finite life of around 25 years but up to 40 years in some segments,” he says. “You have solid cash flows which are even more important because the return has to be generated through the dividends and not capital gains, as the latter will be negative over the life of the asset – although returns may be generated from capital gains if the vessels are sold prior to the end of their life.”

Meanwhile, Navigare Capital Partners will be fundraising over the next 12 months for its second fund. “We are targeting institutional and family offices as investors in Denmark as well as internationally,” says Henrik Ramskov, managing partner at the firm.

The industry is by far the most climate-friendly form of transportation of goods, he says, and, with more than 90% of global trade being transported by sea, it is an important part of the climate agenda. “Shipping, perhaps the most global industry, is undergoing a number of interesting structural changes  driven by a number of factors with the most important being climate,” says Ramskov.

Danish pension funds have picked this route to get exposure to the shipping sector even though open-ended funds are clearly a popular option for many institutional investors targeting the asset class.

In October, IPE Real Assets reported that School Employees Retirement System of Ohio was among investors joining the JP Morgan Global Transportation Income Fund. This fund is expected to buy ships, including container vessels, in markets around the world that can produce net returns of 8% to 10%.

While JP Morgan Asset Management declined to comment about any specific investment funds, Andy Dacy, CIO of the firm’s global transportation group, says: “The departure of traditional sources of capital, primarily commercial banks, due to regulatory changes, has made the maritime industry more appealing as a destination for institutional capital.

Given reductions in traditional capital, we are seeing increased supply discipline, and thus a more balanced and stable revenue rate environment. This increase in stability has attracted institutional investors to what is becoming a more dependable, attractive yield, investment class.”