4
US open-ended property funds: Steady as she goes
Investment Vehicles

US open-ended property funds: Steady as she goes

The days of strong returns are behind them, but core open-ended property funds in the US are very much active in the market. Christopher O’Dea reports on ‘The Odyssey’ funds

There is a good reason some investment indices are called benchmarks. Those that earn the moniker capture the essential performance of an asset class over a long period of time and thereby encourages the participation of investors and investment managers. And it helps if the benchmark accurately represents a strategy that investors can efficiently implement.

One such property benchmark is the Open-end Diversified Core Equity (ODCE) index run by the National Council of Real Estate Investment Fiduciaries (NCREIF). The widely followed benchmark is known colloquially as The Odyssey.

It has been a slow, steady climb in the number of managers and assets managed. Starting with four funds in 1978, the index has steadily attracted the participation of property investment managers – by the fourth quarter of 2017, the 24 funds contributing to the benchmark held $226bn (€183bn) in gross property assets.

Shortly after the global financial crisis, the US core property market began a period of positive performance, which is still continuing. The period of strong inflows to ODCE funds is probably over, in large measure because of the proliferation of value-add, opportunistic and alternative property strategies over the past decade. But those strategies often introduce development, operational and market-demand risks that can dilute the income-generation and diversification benefits that have made commercial property an attractive addition to institutional portfolios.

While asset prices in traditional core markets are at or near historical trend levels, and with some cap rates compressing to record levels core strategies remain attractive due to their fundamental characteristics – perhaps more so than strategies that inherently rely on asset appreciation for a major portion of their total return.

Despite being nominally tied to an index, portfolio construction plays a major role in core performance, and ODCE strategies allow investment managers to position portfolios according to market conditions and the outlook for property sectors and geographical regions. Core strategies also bring a diversification benefit that is often overlooked, and hard to achieve through closed-end funds – diversification by vintage year. Open-end funds, being continuously active buyers and sellers, can have a smoothing effect on an institution’s real estate portfolio, and relieve the pressure, and some of the risks, of committing capital through closed-end funds, which must buy or sell assets whether or not market conditions are favourable.

And with price appreciation levelling off, the income component of property returns will take on renewed importance in 2018 (figure 1). It is not merely the cash flow from rent payments that make property an attractive asset when interest rates are rising, but the prospect that stabilised core properties will be able to increase net operating income as leases are renewed as prevailing rent levels.

All in all, the environment for the diversified core equity property environment looks favourable  enough that NCREIF is in discussion with several investment managers to add new entrants to the ODCE universe. 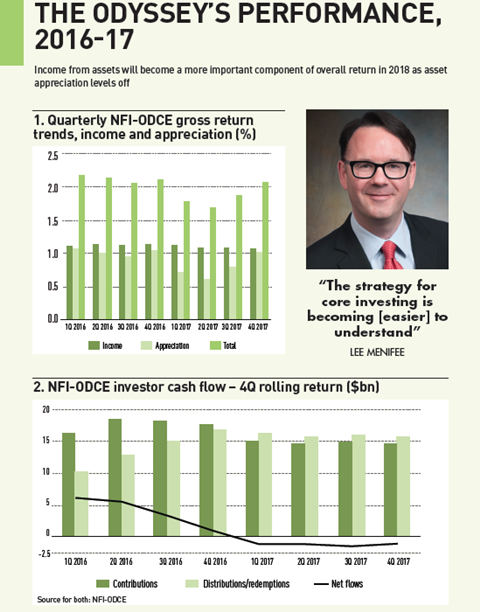 Lee Menifee, head of Americas investment research at PGIM Real Estate, says: “The strategy for core investing is becoming [easier] to understand.” Much of the pricing difference between markets has been closed as cap rates have compressed across the US. With assets “fairly fully priced by historical standards”, he says, “we believe performance at this point is going to be driven much more by the respective income growth prospects for those markets”.

Focusing on income growth “helps to clarify things”, Menifee adds. The locations likely to generate the best income growth are generally already fully priced markets. “We are always focused on the long-term growth markets, and those long-term growth markets are the markets that you would expect – the larger coastal markets,” he says. Despite gateway markets being historically expensive, “those markets are where we see solid long-term income growth occurring, and we understand where the value is in those markets.”

From a shorter-term perspective, Menifee says, “we would not be at all surprised to see some of the smaller Sun Belt markets to do better over the next few years”. Those markets are benefiting from a delayed construction cycle relative to their favourable historical population and job growth, in some cases bolstered by meaningful corporate relocations. Over the short term, he adds, “we think such markets probably will be best-performing from an income growth perspective”.

The attraction of core investing, of course, is that for the most part it is a buy-and-hold strategy. “Core strategy really shouldn’t change that much based on your near-term outlook,” says Menifee. “Investors allocate to core strategies for a stable income and stable approach, and not a lot of portfolio turnover.”

Constructing a portfolio to capture long-term trends, but which also allows some flexibility to benefit from near-term opportunities that fit within a diversified core equity mandate, is something of an art.

David Morrison, CIO for the Americas at CBRE Global Investors, says because the ODCE “is a very transparent index, core managers have the ability to actually use some portfolio construction techniques such as choosing to overweight or underweight certain cities, or certain property types”. Decisions can also be made about “things that add value at the property level, such as leverage levels”.

Morrison describes diversified core equity investing benchmarked to the NFI-ODCE as a proxy for an enhanced index strategy. “While you can’t index private-equity real estate, investors want to know if a portfolio is overweight or underweight relative to the sectors and cities in the benchmark, and why,” he says. “Then within those choices, you want to buy attractive assets than can add value at the property level.”

Effective portfolio construction, then, is a combination of rigorous analysis of the fundamentals of sectors and cities, and disciplined implementation to acquire assets with the best prospect of benefiting from those economic factors. “You have to get both of those things right,” says Morrison. “You can buy the best building in the worst market, and do very poorly,” he adds. Similarly, if a portfolio were composed of attractive individual assets, but overweight an underperforming sector, “it’s very hard to overcome that at the property level”.

For core investors, Morrison says, “making those sector decisions, or deciding when you believe certain asset types or cities are likely to outperform, is a critically important component when you’re trying to add value in a core strategy because you’re essentially buying stabilised assets in a low-risk portfolio with relatively low leverage”.

The late stage of the current cycle suggests it could be timely for diversified core strategies to adjust exposure to office and multifamily property, says Menifee. “We were quite comfortable recommending an overweight to office earlier on in the cycle,” he says. “That’s been a generally favourable call.” A few years ago, “recognising very good early-cycle performance as well as a rising supply pipeline, we recommended an underweight to apartments, and that was also was a generally good call”, he adds.

“At this point in the cycle, we think it’s time to reverse those two and rotate back towards what we believe are better long-term exposures, which is more to apartments and less so to office. While mindful that economic growth may surprise to the upside in 2018 and support the office market, “over the long term core performance really benefits from an underweight to the office sector”, Menifee says. “Apartments are a good asset to have exposure to at all points in the cycle, but particularly if you’re late on in the property market cycle.”

If it sounds like the seemingly vanilla world of core property investing is becoming more rigorous, that is because it is. Investors are increasingly thinking about property holdings as a portfolio rather than as a collection of buildings grouped into a common ownership vehicle. It is a matter of property investment practices catching up with those of other asset classes.

“The level of sophistication of the benchmarking and the analysis of available data provides a level of rigour around this kind of portfolio construction that institutional investors see every day in their stock and bond portfolios,” Morrison says. “Data and transparency in the property markets allow us to analyse and think about property in terms of portfolios, especially in core strategies that might own dozens or hundreds of buildings.”

While consultants recognise the benefit of diversified core managers being able to make tactical weighting decisions based on near-term factors, the attraction of a core strategy is ultimately the income-generating potential of highly occupied assets in major markets that are not encumbered by high debt-service burdens.

While price appreciation has had its day in the sun, income will likely produce a larger component of total return at certain points in the property cycle, says Avery Robinson, senior vice-president and co-manager of the real assets group at consultancy Callan Associates. Income has accounted for 70-75% of the total return from property on a long-term basis, Robinson notes. But over the past few years until 2016, that ratio was almost inverted, as appreciation drove returns from about 2011 to 2015. “What we’re seeing now is definitely a reduction in overall return, and somewhat of an increase in the percentage that income plays,” he says.

Although net flows to ODCE funds began to decline in 2016, the balance between redemptions and distributions seems to have stabilised during 2017 at a net outflow of about $1bn per quarter. In short, Robinson adds, core equity remains a staple allocation for institutional property portfolios.

“For many investors, the majority of their property allocation will be to core strategies, and the ODCE provides access or options for those strategies,” Robinson says. “We believe it’s appropriate throughout any cycle to have exposure to core real estate.” While allocations will vary depending on plan size, structure and investment sophistication, “a good rule of thumb is 60% or higher targeted for core real estate or core strategies”. In a maturing cycle, he explains, core strategies are “attractive because they provide natural vintage-year diversification”.

Open-ended core funds are continually buying and selling assets, while closed-ended funds typically buy assets in a three-year window at the market price. “If you end up buying at a wrong window, it’s hard to achieve your returns, unless you have the discipline to invest every three or so years as the prior fund completes its investment cycle.”

While investors and managers are keeping a nervous eye on the lofty level of many markets and asset prices, the ODCE index continues to serve as a key benchmark for pension fund property investors. “It’s steady as she goes,” says NCREIF president Dan Dierking. For institutions investing in core property, the Odyssey continues.

• Real estate – at least 80% of the market value of net assets must be invested in property; no more than 20% in cash or equivalents.

• Investment – at least 80% of the market value of property net assets must be invested in private equity properties. No more than 20% of such assets may be invested in other instruments such as property debt, public company equity or debt, or the equity or debt of a private operating business.

• Geography – at least 95% of the market value of property net assets must be invested in US markets.

• Property types – at least 80% of market value of property net assets must be invested in office, industrial, apartment, and retail property types.

• Lifecycle – at least 80% of market value of property net assets must be invested in operating properties. No more than 20% of such assets may be invested in, but not limited to, (pre)development/redevelopment or initial leasing/lease-up cycles.

• Diversification – no more than 65% (± for market forces) of the market value of property net assets may be invested in one property type or one region as defined by the NPI.

• Leverage – no more than 40% leverage, as defined by NCREIF.