Pricing and transparency issues need to be addressed before Europe’s open-ended property funds market can grow as large as its US counterpart, says Jennifer Bollen

The European open-ended property funds market is tiny compared with the US – the balanced funds within MSCI’s IPD Pan-Europe Property Funds index had combined net assets of €11.3bn in Q3 2017. In the US, the comparative NCREIF Open-End Diversified Core Equity index had net assets of about $178bn in the fourth quarter.

In February, the European Association for Investors in Non-Listed Real Estate Vehicle (INREV) again attempted to address one of the problems hindering liquidity, sparking discussion about what progress the sector is making in improving operating practices (see Opinion).

The sector has reacted positively to the debate about issues such as standardising fair pricing and clarifying redemption terms, says Tony Brown, head of M&G Real Estate. “There’s a huge drive in the industry to recognise some of these issues and to approach them sensibly,” he says. “In the last three or four years, huge progress has been made in continental European real estate and its attractiveness to a wide range of investors.

“INREV [has] been doing a really good job in the last couple of years,” Brown says. “[It has] taken the lead in trying to identify some of the issues that exist in the unlisted European real estate space and to try to give proper guidance around how people like ourselves should operate.”

David Ironside, CIO for continental Europe at LaSalle Investment Management, agrees that the industry had taken INREV’s concerns on board. “In the bigger funds there has been a lot of progress,” he says. “Managers across the sector have enough experience to know how to ensure investors’ needs are being met and have been very successful in raising capital. They are now considered to be a well established product for investors.”

Some managers are not convinced that change is coming, and question whether certain issues need reform. The comments come more than two years after an INREV report that aimed to improve the liquidity of open-ended property funds. The October 2016 report, Pillars to Ensure Open End Fund Liquidity, identified five issues as the pillars on which an open-ended funds market should be built: clarifying redemption terms and rights; improving access to the secondaries market; establishing and publishing a fair price; improving disclosure to new investors; and respecting local customs.

It followed up the report in November 2017 with a consultation on fair pricing of European open-ended property funds. INREV published the paper with the UK’s Association of Real Estate Funds (AREF). It aims to encourage further discussion pricing methodologies – commonly cited as a crucial factor in bolstering the sector’s growth.

In February, INREV published a Guide to Secondary Trading for investors in open-ended funds. It said “the secondary market can at times feel impenetrable for investors who have not used it”. The guide aims to make secondaries less of a mystery to newcomers.

Are these efforts making progress? Austin Mitchell, head of global product and solutions at manager TH Real Estate, says the fair pricing report shows that “the industry is still in a phase of asking more questions than providing answers”. He says: “It correctly acknowledges that there is no one-size-fits-all approach in terms of a pricing strategy for open-ended products.” 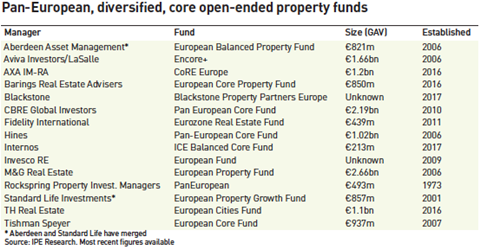 Attempting to apply standards to an asset class consisting of many different investors and styles of funds, with a range of investment objectives, sounds bold. A senior investment professional at a large asset manager said it was unlikely the European open-ended funds market would attract many more investors even if INREV’s five issues were fixed.

Rather, he says, a common approach to calculating net asset value would have a bigger positive impact on funds. “If you take a step back, transaction costs are different globally, the liquidity requirements of investors are very different and different investors have become familiar and built experience with different models,” says Mitchell. “All of these factors must be taken together when designing a pricing and liquidity strategy – and clarity and transparency on how it will be implemented is, of course, key.”

Ironside says: “The key thing for me is fair pricing. We use external values from a very reputable, international company, and we have always been very conscious of being very rigorous with pricing and transparency.”

The lack of a standardised fair pricing model is a high-profile issue. Simon Redman, managing director at Invesco Real Estate, believes the solution is simply for the industry to adopt IRFS international accounting standards and a common approach to variations from that.

Meanwhile, a UK asset manager questioned the necessity of campaigning for greater clarity on redemption terms on the basis that most investors are sophisticated.

Austin says terms have always been clear to investors in fund documentation, while Brown adds that, although redemptions are only likely in extreme circumstances, managers have made strong efforts since the financial crisis to ensure their clients understand redemption policies.

Brown describes himself as an advocate for secondaries in open-ended property funds, enabling investors to leave a fund without affecting its capital structure. Without a secondary market the manager would likely need to sell an asset to return the investor’s capital – a costly and time-consuming process. The secondaries market for open-ended vehicles should be encouraged and is gaining some momentum in Europe, he says.

Property consultant CBRE’s secondaries platform, Property Match, brokers transactions that split the fees between the buyer and seller, and promises anonymity and no conflicts of interest. It also provides mark-to-market valuations for more than 180 funds and publishes a full trade history. Since its inception in 2009, the platform has arranged 1,200 deals worth about $9bn.

Sander van Riel, head continental Europe at CBRE Global Investment Partners, sees clear issues. “Currently, the long entry queues and lack of secondary trading opportunities hold investors back,” he says. “The redemption mechanisms of the open-ended funds prevent true liquidity when investors need it. Liquidity would be enhanced with an adequate pricing mechanism. Consistency in accounting standards across the funds and the fair treatment of acquisition costs would improve the attractiveness of these funds.”

Mitchell says, in the end, pressure for change will need to come from US investors, which make up the largest proportion of investors in European open-ended funds. “Unless those investors are willing to transition and see a need to transition to an alternative pricing and liquidity structure, it’s difficult to see a one-size-fits-all answer – unless it’s a US answer,” he says.

Some operating practices and multiple jurisdictions have probably held back growth. Some investors might not want change, being satisfied with the terms they are familiar with – they agreed to certain structures and know what to expect, says Brown.

Some members of the European open-ended funds market believe it has the potential to achieve the same critical mass as in the US. “Demand continues to be very high,” says Ironside. “We see, in our peer group, the sector growing very quickly.”

INREV’s 2018 investor intentions survey found that 56% of investors globally planned to increase their real estate exposure over the next two years, targeting an average allocation of 10.2%.

“Following significant capital contributions during the past three years, we now believe a handful of funds are reaching critical mass,” says Van Riel. “With the capital queues at an all-time high, the fund managers also have the dry powder that allows a more aggressive growth strategy, either targeting portfolio acquisitions and larger landmark transactions.”

Mitchell says: “We couldn’t be stronger believers that there is far more maturity to come and growth to come for the European open-end funds market. That was one of the strongest drivers for us to create a global business. As you look to combine with US and Asia-Pacific offerings to offer truly diversified global solutions… that’s true for real estate and across asset classes.”

Van Riel believes the European market has potential for significant growth but does not see a catch-up with the US during this market cycle. First, he says, the biggest investors in Europe have clear strategies on how to approach real estate, often excluding open-ended funds due to the quality of real estate available and concerns over liquidity. This makes open-ended funds reliant on relatively small commitments, he says. “Second, growing aggressively in a market that is relatively expensive can also be a risk, and the managers of these vehicles shall maintain discipline preventing a fast growth in the near term.”