1
Value-add: Is it actually less risky than core?
Investment Strategies

Investors are moving up the risk curve to take on more value-added exposure. But some argue that this is mitigating risk instead. Maha Khan Phillips reports

In a low-return environment, institutional investors are struggling to meet their objectives. Some are cautiously moving up the risk curve in their hunt for assets.

Data from the Investor Intentions Survey 2018 by INREV, ANREV, and PREA, reveals that 50% of respondents identified value-added strategies as their preferred investment style for Europe, up from 48.7% the previous year. This was due to the increasing challenge of sourcing fairly-valued core product. Appetite for opportunistic strategies also increased.

Figures from Preqin’s 2018 Global Real Estate Report support this trend. Investors continued to seek exposure to higher-risk real estate strategies in 2017. One-third ($37bn/€30bn) of private real estate capital was secured by opportunistic funds, while 31% ($35bn) was secured by value-added funds; 104 value-added strategies reached a final close last year, significantly more than any other strategy. Only $7.3bn in institutional commitments were secured for core/core-plus funds, reflecting the decline in appetite for prime assets, which have been under pressure, says Preqin.

“Investors have come to accept the lower-for-longer thesis over the last couple of years,” says Andrew Angeli, head of EMEA research at CBRE Global Investors. “For investors struggling with this prognosis – which some pension funds certainly are – enhanced-return strategies are a logical progression.”

Value-added strategies aim to generate higher risk-adjusted returns by applying active real estate strategies. Between 2002 and 2006, the value-add asset class posted strong returns due to a positive market environment. Its performance slumped following the economic downturn of 2008, but began to pick up again after 2013, according to data from Credit Suisse. Leverage is used more frequently than it is in core portfolios, and value-added strategies typically have target exit dates of between four and 10 years.

Kevin Grundy, fund manager at Invesco Real Estate, says: “If I look back 15-20 years, the basic ingredients of what goes into a value-add strategy hasn’t changed. In Europe the return profile you expect to achieve is a low to mid-teen IRR with leverage of 50-60%.” 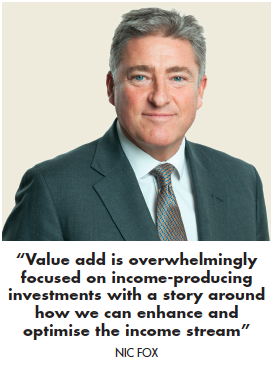 Paul Jayasingha, head of manager research at Willis Towers Watson, says the use of leverage is concerning. “It really depends on your definition of value-add. If value-add means taking lots of leverage, then that is not something we advocate our clients do at the current time.”

Jayasingha says investors need to consider the real estate cycle. “We believe we are later in the cycle, and when you are at a higher point in the cycle, you have to accept that future returns are going to be lower. You can either accept that, or you can take more risk to keep your expected returns constant. In our view, the second approach is dangerous, because when cycles turn, you are far more exposed.”

But some investors say that not allocating is a riskier strategy. Frans Heijbel, head of the indirect real estate portfolio at Swedish pension fund Alecta, says: “We are probably quite late in the cycle, which means we are seeing historically low yields on core assets. And if you buy core, you are exposed to variables or factors that you cannot really control. You are more exposed to yield movements, and if there’s any correction, that is likely to cause a negative impact on your return.

“Maybe there is more downside risk in core now than in a typical year in the cycle, and if you are at risk of losing money from a core investment, that is not really what you would expect from a lower-risk strategy.”

Alecta has a €2bn international real estate portfolio, of which 14% is committed to value-added strategies. Heijbel says the allocation to value-added has increased recently. “You may well be impacted by yield movements in the value-add space, but you can also add value to your investments, which you can control yourself, and use that to offset some of the movement,” he says.

“We think that in a downside scenario you are less likely to lose money in a value-add strategy. With core, you could end up in negative return. So where we are right now, we almost feel that value-added strategies are less risky than core strategies because you can offset market movement by active management initiatives at the property level.”

Fund managers also say they have learned from the past, with some reducing leverage. In February, Europa Capital raised €716m for its fifth European value-add fund. Nic Fox, partner, says the firm brought down the leverage cap in its latest fund from 75% to 65%.

He says: “The important question is how do you define value add? We’ve learnt some lessons after the global financial crisis. For us, value add is overwhelmingly focused on income-producing investments with a story around how we can enhance and optimise the income stream. It’s very much a ‘buy, fix and sell’ strategy. We are not especially pursuing development or taking on entitlement risk.” 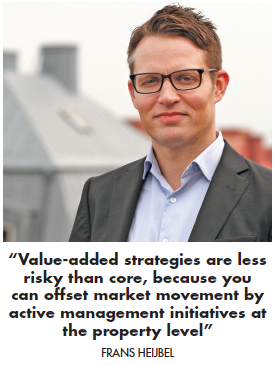 The focus on income is important. “Nothing lasts forever,” Fox says. “At some point there will be a correction in the cycle. We just don’t know when or what will drive it, but we are always mindful that we need to be in a position to defend ourselves from shocks, hence the greater emphasis on income.”

Others believe it is also important to put the lessons of the past into perspective. Paul Crosbie, fund manager of M&G Real Estate’s UK Enhanced Value Fund, which had its first close in February, with investor commitments totalling £125m (€143m), plans to take advantage of the risk aversion created by political uncertainty in the UK. He says investors realise that the occupational market has not seen a build-up of supply threat, the way it did in 2007 and 2008. “The occupational demand has remained fairly strong and in some of these markets tenant demand is mainly coming from domestic occupiers, which are less vulnerable to Brexit shock.”

Grundy believes fund managers can actively manage the risks. “The key is to identify risk and then box it off and manage it through a process,” he says. “You can quantify the risk and you can be transparent about it, and you have to look at risk on a deal by deal basis.”

Grundy also says entry pricing is critical. “You cannot overpay. In order to achieve an attractive entry, you have to find a market that is in some way inefficient,” he says.

For his part, Angeli believes location is paramount to risk mitigation. “You need to make sure that an asset is in the appropriate location for its use so that it is able to transcend any period of economic frailty. Strategies in the private-rented residential and student housing space, for example, may require working with specialist operators and developers. When you are partnering with another entity, that obviously can create additional risk, that’s why in the ventures we pursue we seek to retain as much control as possible in terms of pipeline, project management and exit.”

Competition for assets is high

Investing in value-add also means finding the right opportunity. The amount of capital available to fund managers targeting real estate is large. As of December 2017, dry powder stood at $249bn, but firms are finding it hard to put this capital to work, says Preqin. Nearly two-thirds of the managers the firm surveyed said it is more difficult to source attractive investment opportunities today than it was a year ago – and when they do find a suitable asset they are more frequently competing with other firms with their own dry powder. Preqin estimates that of the capital targeting real estate, $61bn is searching for value-added opportunities.

This can be both a blessing and a curse. “If you invest in an open-ended core fund in Europe or the US, it will typically go out and buy a building as soon as possible,” says Heijbel. “Value-add funds are a little bit more stretched in terms of their investment period. They don’t need to deploy the money, they can wait for the right opportunity and they typically only invest if they can underwrite a certain level of return.”

But waiting or not, investors need to weigh up the pros and cons of moving up the risk curve. “Accepting that future returns are likely to be lower and dealing with that in your asset allocation, and re-setting your expectations, is important. Part of investing is being patient, and over-stretching at the worst time can often lead to worse results,” insists Jayasingha.

With plenty of dry powder waiting to be allocated to value-add strategies, where are the opportunities? Industry opinions vary.

“Where we’ve had the greatest success purchasing in recent years, it has been tilted towards southern Europe, markets like Spain and Italy, where maybe the ownership is a bit more fragmented,” says Grundy. “We’ve made an effort to avoid the crowds wherever we can, and one of the ways we’ve done that is to look at medium-size transactions rather than large portfolio transactions.”

Crosbie says Brexit has offered opportunities. “The EU referendum result created an immediate flight to prime real estate and a heightened risk aversion,” he says. “Core pricing has actually tightened over 18 months. However, assets that are considered non-core because they have some sort of risk attached – whether vacancy, short-term lease expiry, or any form of capital expenditure risk – have been broadly ignored by the investor base.

“Given the confidence we have in some of those sub-sector occupational markets, we can target the right building in the right location in some of these sub-sectors, and utilise our asset management expertise to enhance prospects of growing the income side of things.”

Jayasingha says it is about finding sectors that are resilient, but where institutional investors have less of a presence. “We are looking at some of the alternative property sectors that are less well-owned – for example, student housing, storage, or healthcare properties.”

Angeli agrees. He believes that some of the more interesting opportunities in European property are in sectors that are still in the nascent stages, such as senior housing, self-storage, and even private-rented residential. “While the risk profile may, in fact, be akin to traditional core real estate, given the relative newness for most investors, such strategies typically would be considered a higher risk or value-added in nature,” he says.

According to Angeli, the Paris office market is particularly attractive. “The Paris office market is in its best place in years. The vacancy rate is effectively nil. There’s been a noticeable Macron bounce and business sentiment is quite positive. At the margin you have a Brexit relocation story. Our experience is that you take on speculative development and be confident that you can pre-let 75% to 100% of the project prior to completion.”

There is a rub, however. “Are you being appropriately rewarded? For most investors, achieving a single-digit return for a speculative strategy is hardly justified,” he says. “However, given the fundamentals of the office market, it is among the safest value-added strategies in Europe at the moment.”