3
Is 2019 the year to avoid core?
Investment Strategies

Is core US real estate a safe bet in 2019, or should investors steer clear? Christopher O’Dea and Richard Lowe report

Is core real estate a safe bet in 2019? It is widely accepted that returns are going to be lower than in recent years, as yield compression ends. This is especially the case in the US, which has led the global real estate recovery since the 2008 crisis.

The annual investment intentions survey from real estate associations INREV, PREA and ANREV show an increased appetite for core. The proportion of investors favouring core in Europe increased from 31.8% in 2018 to 39.1% this year. In the US, the shift was more marked, rising from 29% to 41%.

The report interpreted this as evidence of an increase in risk-aversion among investors, “possibly because of the widely held view that we are in the late stage of the cycle”.

But could retrenchment to core real estate be the wisest approach? The divergence between core yields, or cap rates, in private real estate markets and those implied by listed property companies and real estate investment trusts (REITs) raises an important question: are REITs undervalued or are they predicting an inevitable correction in the private markets? (See figure).

In February, Danish pension fund PFA told IPE Real Assets that a correction in private markets was looking “almost inevitable”. Henrik Nøhr Poulsen, CIO of equities and alternatives at PFA Asset Management, said: “When we look at private transactions, we haven’t seen any price corrections yet – in real estate, for example. Listed equities have been through a correction, but private markets have not, and that is a bit of a warning sign.”

Although REIT-market signals can include ‘noise’ from short-term equity market volatility, “in our experience the REIT market has been a useful predictor of the direction of future property values”, and the REIT market has already priced in significant cap-rate expansion from current levels, says Scott Crowe, chief investment strategist at CenterSquare Investment Management, in a recent report. 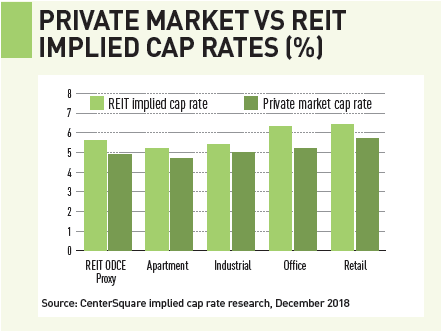 The survey suggested widespread expectations for annual US core real estate returns to be below 5% by 2020, which Crowe believes “may prove optimistic”. As the economic cycle ages, he says, “the traditional ‘safe haven’ of core property may represent the biggest medium-term risk to the performance of a property allocation”.

Three factors suggest core cap rates are on the rise, Crowe believes, “which will likely offset much of the NOI growth and return from yield, and lead to low net returns from core real estate over the next one to two years”. First, the fundamental backdrop: low cap rates, decelerating NOI growth and the potential for rising interest rates “suggest an environment of rising cap rates”.

Second, the REIT market is signalling cap-rate expansion in 2019. Third, core fund outflows, as represented by the NCREIF Open End Diversified Core Equity index, “are a reliable leading indicator of core real estate fund returns, and the direction of these flows is unambiguously down”. In fact, net cash flows into ODCE funds were a negative US$918m (€813m) in the fourth quarter of 2018, according to NCREIF.

In short, after a long, positive run, property values are vulnerable. “A unique feature of this cycle,” Crowe says, “is that the ‘supply constrained’ gateway markets are those with the most cranes”. This is a direct result of capital flooding into the safety of core gateway markets.

The ironic element of the late-cycle increase in supply is that “NOI growth for property owners has meaningfully decelerated even as the economy has accelerated”. Something has to give. With rates rising and NOI growth moderating, Crowe contends the justification for current low cap rates to prevail is called into question: “We do not believe core property valuations have adequately priced in these risks.”

So what should investors do? Crowe suggests three destinations to which investors could divert capital that would otherwise go to new core property acquisitions. One, core property could be acquired through REITs, which are already pricing in about 70bps of cap-rate expansion from current levels.

Three, target other real asset classes that are positioned to benefit from strong secular demand and investment tailwinds, such as infrastructure.

“This situation is counterintuitive for many investors who are used to core real estate being a safe haven, particularly later in the cycle,” Crowe says.

However, according to JP Morgan Asset Management, “don’t underestimate core” in the US. In its 2019 global alternatives outlook report, the investment manager, which runs the largest core property fund in the US, says: “For the past several years, many investors in US real estate have tilted their new allocations to value-added properties in the search for higher returns; we see this trend at an inflection point.”

JP Morgan points to the rise in construction costs for property improvement or development that it says is “thinning the return premium for construction risk”, limiting the supply of new core properties and even allowing some stabilised, fully leased core properties to sell below the elevated cost of building new unleased assets.

Since 2016, income from leases of existing US core assets has been growing at a faster annual rate (4% to 5%) than core property values (2% to 3%), JP Morgan says, citing NCREIF data. “We anticipate that rising construction costs will help support increasing rental incomes. When construction costs go up, new properties have to charge higher rents to be viable; that allows existing core properties to raise rents with less risk of losing tenants.” the report says.

“Rising construction costs will also limit new space available for lease –another positive for rent growth. So we see further upside in core rents and valuations, provided the economy and demand continue to hold up.”