Is the market for pan-European open-ended funds about to enter a new phase of growth? Rachel Fixsen explores the appeal for both investors and managers

New entrants are now coming into the sector to offer the funds, raising questions about the potential growth for the market – could it eventually rival its equivalent in the US?

The market for open-ended diversified core equity (ODCE) funds in the US started in the 1970s and has grown to a point where it encompasses $152bn (€134bn) of property assets.

“The US market is way more mature than the European market, but there’s no reason why it shouldn’t in time reflect what is happening in the US,” says Will Rowson, partner at real estate investment firm Hodes Weill & Associates.

The developed countries of Europe are home to almost as much institutional-quality commercial real estate ($7.4trn) as there is in the US today ($8.9trn), according to an estimate from CBRE Global Investors.

“The market for core funds in the US is still much larger and more liquid than [that in] Europe, mainly because it has had a 25-year head start as a unified real estate market, whereas the European real estate markets were still more fractioned. We expect that Europe will gradually close the gap because there is strong demand from global investors for core fund exposure over all regions.” 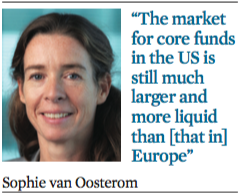 Isabelle Scemama, head of funds at AXA IM, has said the fund is targeting cities and not countries.

Meanwhile, TH Real Estate has launched an open-ended fund called the European Cities Fund, which started with €200m of co-investment capital and is targeting equity of €3-5bn over the next five years.

Meanwhile, Cornerstone Real Estate, the property investment arm of MassMutual – soon to be rebranded under the Barings name – is understood to be seeking to raise €1bn or more in initial equity from US and foreign investors for a new pan-European open-ended fund called the Cornerstone European Core Fund.

The firm is said to be aiming for returns of between 7% and 9% by investing in office, retail and industrial assets in major European markets. It intends to use leverage to increase its buying power to €1.4bn, including at least €175m of equity that Cornerstone itself would contribute. 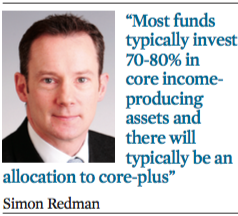 Given the strong performance that pan-European open-ended funds have turned in over the past two years, the current degree of investor demand for these vehicles is hardly surprising. The IPD Pan-Europe Quarterly Property Fund index, which is based on 15 core open-ended funds, indicates returns of 13.5% for the whole of 2015, down from 14.1% in 2014.

Capital return was the largest contributor to the 2015 overall return, at 8% year-on-year, even though this had slowed from the middle of 2015, having stood at 10.5% in June on a year-on-year basis. The income return component of the overall return in 2015, on the other hand, had sunk to 5.8% – a low not seen since June 2009.

In the US, ODCE funds attract not only domestic capital but many foreign investors seeking to gain immediate exposure to US real estate, according to Hodes Weill. The popularity of the ODCE funds has led to entry queues which now average 6.5% of NAV, and many managers are having to tell new investors they have to wait between six and 12 months before their capital is drawn down, the firm says.

Just what is the business case for a fund manager setting up and offering a fund in this sector? First, says Rowson, provided it is successful, the fund should provide the firm launching it with a wide swathe of core dependable income that can be used to pay the business expenses and when it gets to a certain size, make a healthy profit. “It’s literally the bedrock to a fund management business,” he says.

The second benefit for a manager in bringing a fund of this type to market comes from the higher value the market places on an open-ended fund. “The enterprise value of a open-ended fund is quite significantly higher than that of a closed-ended fund,” Rowson says.

In the recent sale of a fund management business principally dealing with closed-ended property funds, the price was determined by a multiplier of around eight times the EBITBA (earnings before interest, taxes, depreciation and amortisation) of the business – far lower than the multiplier currently used for the valuation of open-ended funds which is closer to 11 or 12 times earnings, Rowson says. “This type of fund business is valued and seen by the market as providing stickier income,” he explains.

And the funds themselves can grow fast, he notes, citing the pan-European fund he was involved with at CBRE Global Investors which had around €500m in net assets at the end of 2013 but now manages almost €2bn of assets, having attracted a large amount of capital from around the world.

While the concept of an open-ended fund is that an investor can trade in and out, in practice when investors choose the right vehicle, they are likely to stay in that fund for several years, Rowson says.

One of the big attractions for investors of open-ended compared with closed-ended funds is the control they have over the length of time they remain invested, since open-ended funds are not liquidated after a set number of years.

A good opportunity has now arisen for potential new entrants into the European open-ended property funds market, he says, largely because of the difficulties the big funds are now having in satisfying their queues of investors waiting for market exposure. “This can mean that investors who want to invest in a successful fund have to wait up to 12 months to get exposure,” Rowson says.

Although as a fund manager, this is a good situation to be in, he says it ceases to be one if the delays stop them being able to attract investors.

In this environment, new entrants to the market can have an advantage, especially if they are part of a group that can provide them with seed capital to build a large enough portfolio to give investors immediate exposure, he says. 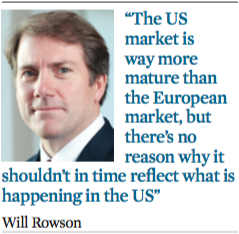 However, Simon Redman, Invesco Real Estate’s head of product management in Europe, questions the extent to which new entrants can attract investors away from the queues of larger, more established funds. “You might get exposure quickly but you’d have

very high specific risk,” he says, adding that, if he were the investor, he would rather have greater diversity.

“Most funds typically invest 70-80% in core income-producing assets and there will typically be an allocation to core-plus which will add a bit of extra additional returns to the funds,” he says. A larger, more mature fund, however, can not only have this type of allocation but has a larger investment universe and can invest in larger transactions in key gateway markets as well as shopping centres, for example, he argues.

Redman says the fund queues, with investors waiting for capital to be drawn down, are simply part of the nature of the type of vehicle. “The drawdown principle of these funds applies to all funds, new and established, and means investors can be waiting in a queue for one or two quarters,” he says. “This can be slightly frustrating for investors, but what investors want, in our experience, is for their managers to take the time to act wisely and invest their capital in good assets which will deliver performance, rather than just seeking to invest as rapidly as possible.”

Van Oosterom agrees that in this business size matters in order to provide good diversification and secure liquidity for investors, but says the new funds recently launched in the market will certainly mature the index for the funds and expand it further.

Redman sees the pan-European open-ended funds’ market continuing to grow as allocations to property rise. “There is a pretty wide range of investors who want to access real estate, but you have to be a big investor to be able to access directly,” he says. “We have seen a mix of capital flowing into such funds, particularly from investors in the UK, Germany, the Netherlands and the Nordic countries.”

Even though the success of the US ODCE market is to some degree translatable in Europe, Rowson says there are some important differences between the two markets. Not only is the US an entirely single-currency area, there is uniformity in its taxes and, broadly speaking, there is only one culture and language that investors and other property market participants have to deal with.

Rowson agrees that this homogeneity relative to Europe makes the operation of the ODCE fund market in the US marginally easier, but argues that the fact that CBRE Global Investors and Invesco have achieved such high volumes in their open-ended funds proves there is a demand for these products and is encouraging European investment houses to launch similar products.

The US ODCE market has attracted a lot of European investors partly because the FIRPTA tax on direct property ownership by foreign investors makes open-ended funds a relatively sensible choice. But there is no equivalent tax scenario in Europe for US investors, which means indirect investment is not the particularly tax-efficient ownership option that it is for European investors in the US.

Rowson also notes that European investors have lower return expectations when looking at the US market than their US counterparts looking towards Europe. “American investors have often only gone abroad to get value-add or opportunistic exposure, so getting dividend returns of 4% or 5% on core real estate doesn’t appeal to them,” he says. “There don’t seem to be many playing the purely global diversification game yet, whereas some German, Canadian and Japanese investors, for example, are doing that already.”

At the moment, the pan-European open-ended property funds market is still at an early stage, and most offerings are focused on core real estate. But there are some differentiations already, with some funds including the UK and some excluding it, and each of these variants offered with currency hedging and without.

If the market continues to be successful, Rowson predicts that the next variations of funds will focus on particular market sectors and geographies.