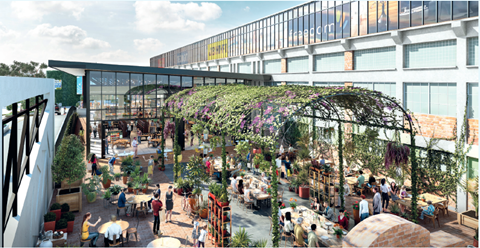 The proposed redevelopment of the Homemaker Centre in Sydney

When the Australian boutique property investment firm Fortius brought BlackRock into a A$141m (€89m) real estate deal in Sydney last year, BlackRock’s main focus was the value-add opportunity. Having made a number of value-add investments in Australia, BlackRock was a ready partner in buying the Homemaker Centre on Sydney’s affluent lower North Shore.

Fortius plans to bring a ‘lifestyle’ element to the centre. “We have a carefully-costed capital allocation to repurpose the existing street-level car park as an expansive food, beverage and lifestyle offering,” says Nick Sproats, Fortius CEO. Over the life of joint ownership, the majority of the tenancies could also be improved, he says.

BlackRock went with Fortius to Brisbane in 2015, at a time when Brisbane was hardly on the radar of global investors – their attention was then firmly on Sydney and Melbourne.

“Vacancy was high and people were sceptical about the market’s prospects,” says Sproats. “But we foresaw that Brisbane could recover faster than market expectations.”

The partners acquired an office complex at 201 Charlotte Street in Brisbane for A$81.5m on a cap rate of about 8.25%. The property was repositioned. It now has a strong tenant profile and long average lease expiry.

Agents are hoping to get A$130m for the building, which would mean a handsome capital gain of almost A$50m in less than four years.

Brisbane is flavour of the month for both domestic and international investors, who have been priced out of the expensive Sydney and Melbourne markets.

Most recently, Fortius partnered Heitman in buying The Barracks in Brisbane for A$162m. Again, the rationale was simple. The asset lent itself to a value-add strategy. Its internal space could be redesigned and its tenancies reconfigured.

With value add, says Sproats, typically the amount of new money needed to be spent ranges from 5% to 15% of asset value, but the reward comes in increased operating output. Value add is commensurately less risky than development.

“We buy assets shunned by core buyers who do not want the level of risk we are prepared to take on. Core buyers want something that has been fixed up and is running at optimal capacity. They want income that displays low volatility from the start of their ownership.”

Fortius is one of a small handful of Australian boutique fund managers, including CorVal Partners, Altis Property Partners and EG Funds Management. These managers have honed their reputations as specialists in value add, but none has the 28-year track of Fortius.

To date, Fortius has transacted 86 properties with a collective value of A$4.1bn, generating an annual IRR averaging 15% across its assets.

“Global investors look to us for a hands-on approach,” says Sproats. “They need locals to be able to execute strategies which generate higher returns.”

Fortius fund manager James Quigley says: “We look to employ our networks in everything from finding a deal to executing it, to finding buyers when it is time to exit.”

Sproats adds: “Around half of our investments are asset-specific. We buy them to add value. The other half is market-driven.”

One of the current investment themes for Fortius is B-grade office buildings in Sydney. Many of these were recently bought by Asian developers intent on converting them into apartments. Australia’s rapidly-cooling apartment market has put paid to that strategy. As Quigley sees it, the next round of redevelopment could be “five to 10 years away”.

In 2017, Fortius and Singapore’s SC Capital bought a B-grade building in Sydney for A$158m, a price that could generate considerable upside after it has been repositioned.

“We look for the hidden gems in the market,” says Sproats. “With some polishing, we turn them into diamonds.”