4
Valuations: In search of a global standard
Investment

Valuations: In search of a global standard

Is there a need for a single global valuation standard? Steve Williams looks at both sides of the argument

Over the past seven years, the global institutional investment market has proved an uncomfortable place for a property valuer. Not to place too fine a point on it, the journey has been a roller coaster ride.

As shown in figure 1, the market’s 2007-14 profile began with a steep tumble into the 2009 abyss of underperforming loans. Asset values melted like spring snows and, with them, credit lines and transaction activity. For the next two years, valuers felt deprived of any meaningful market evidence. 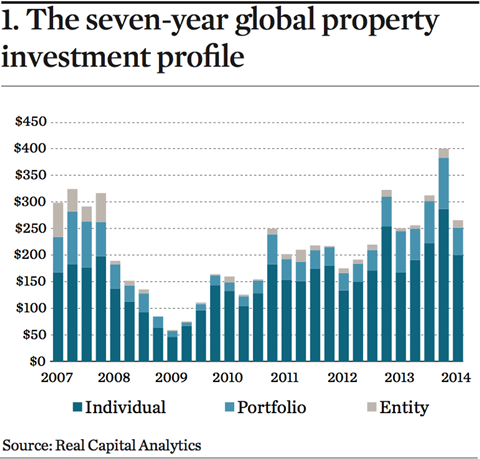 Predictably, two years later the slide began its reverse. Global investment volumes for properties worth more than $5m (€3.8m) began a sustained recovery on a quarterly, year-on-year. Records now show that in 13 of the past 16 quarters, investment volumes have been in positive territory (figure 2). 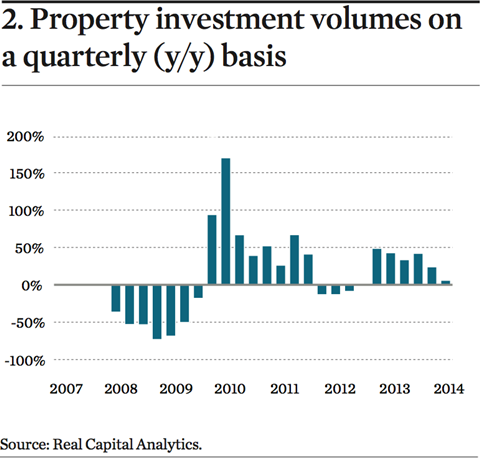 In these circumstances, questions were inevitably asked about how the valuation profession dealt with volatility. The answer, on the whole, seemed to be ‘competently’. Today, the industry is neither licking its wounds nor preening its feathers. Instead, it is heeding the lessons from those difficult seven years, one of which is the question about whether international valuers should work to a single global valuation standard.

There are, it seems, two schools of thought. One affirms a pressing need for a single, robust standard on the grounds that there is insufficient consistency in the application of current valuation methodologies.

Contrarians believe that to accommodate the many ways in which property leasing and transaction are handled locally, it is acceptable to work within the plethora of ways valuation theory is applied. So who is correct?

There is an enabling factor at play. In practice, valuers are able to use today’s technology to dissect markets remotely. Given the improved market transparency and easily accessible web-based data, valuers can track deal-by-deal market movements on an almost daily basis.

Thus, ordering a consistent valuation format may mean merely sending out ‘pre-skilled’ valuers to inspect and value remote properties in foreign markets. In theory, they would then bridge any perceived geographic incompetence, by forming alliances with local experts.

The second notion centres around International Financial Reporting  Standards (IFRS). The accountancy profession, which is working through the IASB in Europe and Asia, and FASB in North America, favours the adoption of a consistent standard for valuations of properties held on the balance sheets of listed companies. Clearly, from a full disclosure viewpoint this is a valid requirement.

“IVSC,” he says, “aims to reduce diversity in the way standards are applied by providing guidance and technical information that will assist valuers to apply best practices.”

A notable validation of IVSC’s remit has been the high demand for their international standards as a default mechanism in countries where no other valuation standards exist.

Finally, there is a third and compelling argument in the notion that, had there been an internationally-accepted standard underlying property valuations in 2008, the catastrophic effects on the financial crisis might have been avoided or, at least, minimised.

A parallel support mechanism for a global valuation platform, is the newly formed, 42-member International Property Measurement Standards Coalition (IPMSC). IPMS, under the chairmanship of RICS past president Max Crofts, is finalising a global property measurement standard for office properties. It will then move to other sectors, including residential.

Ken Creighton, RICS standards director and the behind-the-scenes architect of IPMSC, states: “IPMS  has started with the premise of a mechanism that  identifies differences between local and global measurement methods. It does not aim to mandate immediate change to existing local methods but hopes to demonstrate alternative (hopefully better) measurement methods which, over time, local markets will adopt.”

David Wilkes, the current chair of the RICS-Americas’ Valuation Council is a fan of both IVS and IPMS. “Institutional investors,” he says, “regard globally consistent guidelines as an essential element of an efficient international property market.”

Multiple-application approach
The contrarian view cites compelling arguments in favour of permitting a diverse array of locally appropriate ways in which valuation methodology can be applied.

It begins with the fact that real estate is immovable and therefore local and fixed into its neighbourhood. This makes it essential, say multi-application theorists, for valuers to account for market differences in the way leases are written and properties are traded. Even with new data transparency tools, it is unrealistic to invoke a single global valuation standard against the headwinds of local protocols.

Germany and the UK are good examples of countries whose valuation philosophies are poles apart. In Germany, where valuation committees continue to disseminate land-value data, local valuers use the Verkehrswert definition – or average price expected under normal market conditions. This represents, they claim, a more sustainable long-term view, undistorted by temporary market abnormalities. Like the Swiss and the Nordics, their emphasis is on smoothing market upswings and downswings.

In the UK, valuers believe that property is relatively illiquid and that adjustments must be made even for short-term market movements. Consequently, valuations tend to mirror the market volatility curve, helped perhaps by the close inter-relationship between benchmarking from valuations, and valuing from benchmarks. An era of rapid market change has resulted in a culture of more frequent re-valuations than anywhere else in the world.

Somewhere in between are the methods of Portugal, Spain, Sweden, Italy and the Netherlands. While further study is needed to identify linkages and gaps, such cultural diversities make it almost impossible to impose a single, global or even pan-European valuation standard.

The situation is further exacerbated worldwide by the diversity of the terms on which properties are leased. Complex questions arise about such items as recoverable operating costs, rent increase clauses, costs of sale – each treated differently from country to country. UK prefers the ‘FR&I’ leases; Germany relies primarily on the ‘dach-und-fach’, both strange terminologies for US investors.

Europe categorises leases as either ‘warm’ or ‘cold’. The US relies on openly negotiated lease terms with almost no consistency in the expense clauses. Typically, for investment properties, expense ‘stops’ enable landlords to ‘pass-thru’ that portion of the operating expenses that exceeds an agreed landlord’s ceiling. But, even in the US, lease provisions can vary by geographic region and/or by property sector.

Thus, in the valuation process, the projection of the anticipated bottom-line net operating income (NOI) or, in DCF analysis, a series of annual cash flows plus the eventual terminal sales revenue, can become a minefield for an investor trying to understand the valuation.

It is only by accommodating different local practices, say the multi-application proponents, that valuers can provide a reliable platform for investment decision-making.

Nick Harris, director of European valuation at Savills, agrees. “It is dangerous to employ a single approach in cross-border method of valuation,” he says. “Valuers must reflect local market practices and the way risk and return is defined locally.”

In other words, by not being familiar with local customs, valuers are in danger of compromising both the credibility of their conclusions and the veracity of the investment decision.

Finally, by way of context, Ian Cullen, a co-founder of benchmark-setter IPD, often reminds us that market differences are not an artifact of our different valuation applications. The valuation process is, by its very nature “a responsive rather than a proactive endeavour”, he says.

Common ground
For help in finding some common ground between these seemingly divergent viewpoints, I turned to the chair of the RICS Global Valuation Board and head of valuation for UK and Ireland at Ernst & Young, Mark Gerold.

“I believe,” says Gerold, “that if the institutional valuation profession is to survive in developed markets or to develop in undeveloped markets, then an overarching global performance standard is required. This must be at a very high level. Under this arch, local standards can exist via which valuers can take account of all the many local customs in the way property matters are handled.”

David Faulkner, executive director of valuation and advisory services for Colliers International in Asia and a six-year member of IVSC’s professional board, agrees. “Rather than usurping local practices,” he says, “cross-border valuations should seek an alignment of local versus global, setting out a clear road map of the differences.”

In his experience, technical standards generally fall within local applications of established methodologies. Whereas service delivery standards, including codes of conduct/ethics, are global and should not be diluted, methodology can be adapted and applied locally.

“In terms of quality, for me there should be no local compromise,” agrees Faulkner. Like Gerold, he believes a high standard of work must be common to all and is all for learning lessons from the recent difficult cycle. “Qualified, regulated valuers should not tolerate cheap or inferior work. If we do not work to the highest possible standards, then the advisory work for which RICS Registered Valuers, for instance, are gaining an enviable reputation, will be taken over by other professions such as accountants and bankers.”

“An adjunct repercussion for me as an employer,” Faulkner points out, “is that, if poor work causes fees to fall and the incidence of lawsuits to rise, then young professionals will chose other professions over valuation”.

These points are not lost on professional bodies. Entities like RICS (through its influential 150,000-member global network), TeGova in Europe, API in Australia, JREI in Japan, HKIS in Hong Kong, and both the Appraisal Foundation and Appraisal Institute in the US, have worked tirelessly over the years to promulgate, update and regulate a high valuation standard in the public interest.

There seems to be some unanimity, after all, in answering questions about a single global valuation standard for the institutional property sector. The application of established methodology can be local in context but the standards applicable to how valuers carry out and report their work, must be global and robust.

In other words, there should be an over-arching global performance standard which emphasises the quality of the supporting analysis but within an applied methodology that acknowledges local customs.

To take a lead from the Appraisal Foundation’s Uniform Standards of Professional Appraisal Practice (USPAP), the contextural test of a selected methodology is whether the scope of the work leads to an opinion that is credible for its intended use.

In conclusion, the valuation profession needs to continue its joined-up dialogue about global standards in order to craft intelligent responses to agencies seeking globally integrated solutions to financial questions.

In this respect, Mark Gerold sums it up well. “I believe,” he says, “that if the valuation profession is to remain relevant in a global market, it must adopt a globally high ethical standard that is inclusive, technically, of all local customs.”

To corroborate this view, we need look no further than the RICS’s Red Book. The current edition encompasses a collection of standards that, together, move best practice into a realm that is tolerant of all relevant applications of established methodology.