When Tristan Capital analysed working-age populations in Europe, it raised wider implications for the definition of ‘core’. Simon Martin explains

The phrase ‘demography is destiny’, ascribed to French sociologist and philosopher Auguste Comte, is just as relevant to European real estate investors today as it was in the 19th century.

For all its attractions, Europe is ageing. For investors used to the powerful forces of positive population growth, this mega-trend presents a potential barrier to making investments. But at the same time, another powerful demographic effect is pushing in the opposite direction: urbanisation.

European urbanites now account for nearly three-quarters of the total population and the United Nations expects this to break through 80% by 2040 and to still be rising in 2050. This trend has picked up significant pace since the mid-2000s, as the hard-pressed millennial generation have migrated in increasing numbers to urban areas to find work. For obvious reasons, understanding the trade-off between ageing and urbanisation is now even more important for those thinking about real estate investments.

That makes urbanisation research a burgeoning business. The ‘urbane millennial’ concept now anchors many different strategies and forms the focus of a lot of capital-raising activity. It is therefore no surprise to see research-based firms like ours spending significant time unpicking the issue.

Tristan’s analysis started several years ago and has led to a string of papers, triggered initially by questions from US and Asian clients on the net effect of ageing populations and urbanisation on our investment decisions. Ultimately, the findings led us to some conclusions that have deeper implications for the ways in which property investors define risk, centred on the definition of ‘core’. 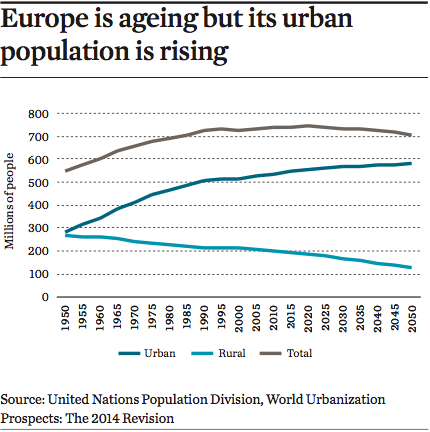 The scope of our work widened beyond simple population and demand side effects, largely because when we started to discuss our work with clients, it became clear that many drew an explicit link between population, inflation (and deflation) risks and interest rates in a way that clearly have implications for how investors price risks into real estate cap rates. This led us to consider population (and particularly working age population) across a range of global cities and alongside the wider macro-variables that determine how investors price risks. The insights from this work are global and wide-ranging but there are four key points that should inform the way investors think about demographics, urbanisation and how they link to risk in Europe.

Firstly, the working age population in cities has a significant effect on how investors price property market risks. In our view, the best way to look at this for Europe is to examine city-level pricing in countries that already have seen flat or declining demographics. In such countries, we found that investors differentiated very clearly between cities that had growing working-age populations and cities that were shrinking their employment base. In many cases, there was a near one-for-one relationship between the growth in working age population and the spread between city level cap rates – 1% population growth advantage led to close to a 1% lower cap rate.

The second point is that if you assumed an inflationary environment there was no particular change to the relationship. In other words, in countries where inflation risk was very low, like Japan and Switzerland, cap rates still behaved in the same way. In addition, it was clear that in these countries that core cap rates tracked down as the inflation risk premium declined. This suggested that investors were more inclined to price assets on spread basis (rather than on an absolute yield), as long as they were comfortable with the offsetting effect of continued urbanisation on working-age population growth.

Thirdly, we observed that the importance of size varied by country and market and hence not all ‘core’ was defined or made the same way around the globe. This suggests that investors should try to avoid being boxed into thinking about ‘core’ as being the preserve of the larger globally recognised cities such as Paris, Milan, London and Berlin. Again, the data shows quite clearly that if smaller cities are growing their working-age population quite quickly, they can overcome investors’ unwillingness to price them as potential ‘core’ locations.

Clearly, there were some minimum size limits below which institutional investors will struggle, but as you start to examine these limits and compare them across markets globally it becomes very clear that, although size matters, you have to be adaptive when you are thinking about how ‘core’ is defined.

Lastly, and perhaps most surprisingly, a significant number of European cities in aggregate have positive working-age population growth stats for the next decade. Taking Germany as an example, the UN’s projections indicate a total population decline of 1% over the next five years and 2% over the next 10. In contrast, the outlook for its major cities is bright. Frankfurt and Munich are in what we would call a ‘high-growth’ category (4-5%), while Berlin, Hamburg, Dusseldorf and Cologne are not far behind at 2-3%.

Overall, there are about 250 ‘cities’ in Europe that fall under the UN’s urban definitions and around 150 have growing working-age populations. If we break this down further, three-quarters of Western Europe’s cities should see cumulative population growth of at least 2.2% over the next five years and one-quarter should expand by at least 4.6%. Again, this positive growth doesn’t imply that all growing cities are destinations for ‘core’ institutional capital, but it does call into question some investors obsession with only owning assets in London, Paris and Berlin.

Viewing urbanisation through the prism of working-age population growth at a city-level offers a new framework to evaluate risk beyond the global gateway cities. The trick, as ever, will be using this data to help frame strategies that have the potential for risk-adjusted outperformance.