1
Technology: The power of crowdfunding
Investment

Real estate crowdfunding has existed for only five years. Will it remain a niche activity, or is it going to affect markets? Maha Khan Phillips reports

Every gold rush in history follows a similar pattern. An opportunity is spotted, the news spreads, speculators race to get there first, and the marketplace is quickly saturated. In the end, few individuals or companies are left standing.

Real estate crowdfunding platforms did not exist five years ago, but Bloomberg estimates that there are more than 125 sites in the US alone. Market participants believe that figure is closer to 150. Is it a new gold rush?

While innovative technologies such as Fintech and robo-advisors are threatening to transform the asset management industry, they have yet to directly affect institutional real estate.

Emmanuel Lumineau, chief executive and founder of BrickVest, the UK-based global platform that launched last March, says the industry needs to be shaken up. “There are managed account platforms for hedge funds and there are equity trading platforms, but real estate doesn’t have anything like it,” he says.

“Institutional investors end up, most of the time, giving their money to a passive mandate. They can’t hedge, and they can’t actively manage their positions. Plus it’s harder to diversify across geographies and sectors.” 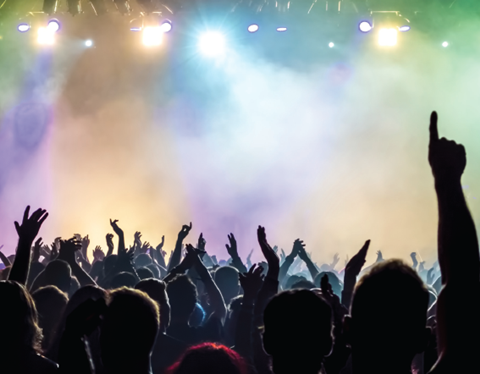 BrickVest has deals worth £250m (€294m) in its platform at the moment, and estimates that figure will increase by £50m-70m at the end of the first quarter of this year. The firm offers both debt and equity propositions, and invests in commercial and residential properties in major global cities. It is attempting to build up a secondary market as well.

“Right now, we have geography covering all of Europe, and all strategies from high risk to low risk,” Lumineau says. “Our return profiles are opportunistic, at 15% to 20% return on investments.”

BrickVest is one of the few UK crowdfunding platforms aimed at institutional investors – although Lumineau says clients to date are high-net-worth individuals and smaller family offices. “We are starting to talk to pension funds,” he says.

But pension funds are adopting a wait-and-see approach to the sector. “I’m still not seeing institutional funds in this market,” says John Finnemore, partner at law firm Nabarro. “They are definitely interested in crowdfunding, but I’m not seeing much real hard money on the table. There have been some deals, but they are often at low levels – the sort of ‘let’s have a go and see what we can do’ deals, rather than the ‘here’s our £100m’.”

It is easy to forget that the first crowdfunding initiatives like Indiegogo and Kickstarter launched less than a decade ago in the US. In real estate, the first initiative was started by property developer Fundrise. In 2012, Title II of the US JOBS Act permitted crowdfunding platforms to raise up to $1m (€930,000) in funds annually from high-net-worth individuals and accredited investors, and Fundrise launched the first investment.

Retail investors were precluded from the market, and this influenced the evolution of the industry in the US. “The US is, as usual, ahead of the curve. Until very recently, their regulation did not allow for retail investors, and it meant that the platforms had to turn to institutional investors very quickly,” says Brenna O’Roarty, an independent consultant and author of a 2016 report, Real Estate Crowdfunding: Gimmick or Game Changer?, commissioned by the Investment Property Forum.

Institutional investment through credit lines and co-investments is underpinning the industry, making up 73% of the market, according to O’Roarty. In the UK, retail investors account for 75% of the funds raised – although regulatory concerns about the suitability of retail investors could change the landscape in the future.

Still, there are initiatives to institutionalise the sector in the UK. Rohin Modasia, CEO of Global Alternatives, the firm whose platform, PropertyCrowd, launched in January, says there was a gap in the market he tried to exploit. “We looked at what was happening in the real estate crowdfunding sector around the world, particularly in the US,” he says. “In the UK, there were signs of crowdfunding propositions, but they were only retail. Outside the US, there weren’t any institutional platforms.”

PropertyCrowd is finalising its first deal, a gross loan of £1.28m, with participation through PropertyCrowd standing at £432,000 (the firm will take on a maximum 50% debt participation). Modasia is quick to point out that the firm has a sophisticated business model in terms of its transactional and custodial arrangements, hiring Gallium Fund Solutions as its custodian. The firm is also launching Prop-X, a cross-border trading platform for debt and equity instruments, backed by individual and multiple properties, later this year.

“At the moment, there is no venue or capability for asset managers to list those securities,” says Modasia. “Our vision is to enable real-time asset allocation into real estate as an asset class. It is about launching an exchange where investors can interact with real estate in the same way that they do other asset classes.”

The market is not without its controversies. Last year, Fundrise sacked its CFO and treasurer, Michael McCord, for alleged extortion. McCord, in turn, said he had been alerting the firm to ‘serious fraudulent behaviour’, according to media reports.

Industry participants say the firm is still a leader in the field, however. Its first non-exchange-traded e-REIT, offered to both accredited and non-accredited investors, was oversubscribed by 403% in four hours when it launched in December 2015. In February, Rise Companies Corporation, which owns Fundrise, raised more than $14m in equity online, offering investors the ability to own a share in the platform itself. 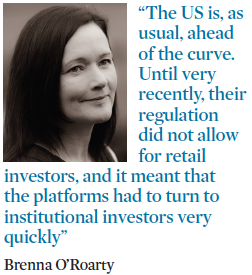 Raising equity is something that another company, UK-based peer-to-peer property lender Wellesley, attempted last year via an equity crowdfunding campaign on Seedrs. But Wellesley suspended the campaign in January. It had hoped to raise £1.5m through the funding portal, but it only managed to raise approximately £200,000.

Graham Wellesley, founder and CEO, is adamant that the firm has a healthy balance sheet in excess of £1m. “We had seen other lenders use crowdfunding for small retail money-raising and we thought it would be nice to have, in keeping with the spirit of our relationship with our retail investors,” he says. “It was a way to offer investors the ability to participate as equity investors in the firm, but it was not a requirement for us. What we saw from our investors was that they had huge appetite and loyalty to the firm for investment products, but that they didn’t show the same appetite for equity risk.”

The firm’s lending portfolio is about £160m and it has just less than £200m in retail funds, according to Stephen Bell, group chief risk officer. He says the firm will not discount institutional investors, but that there would have to be sufficient depth in the market for risk that meets its criteria first. 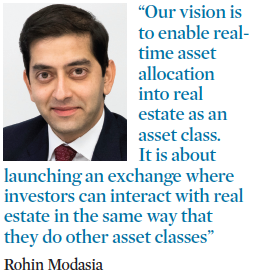 Consultants believe that consolidation is inevitable in this market, but regulation will also be a significant factor. “This has become a political hot potato,” Ravi Takhar, chairman of Urban Exposure, the development finance provider. “Peer-to-peer lenders are taking money from the public and they are deploying the money in financial assets, and the regulator is concerned that it is very much like a bank, without the full checks and balances and oversight of the bank.”

The FCA published an interim feedback statement on its review of crowdfunding rules in December. Proposed new rules will be circulated in the early part of this year, and final rules will be implemented in 2018. Consultants are highlighting the requirement that retail investors do not invest more than 10% of their assets in a non-readily realisable security. New and future regulations on non-mainstream pooled investments mean they cannot be offered to anyone investing more than 10% of their net asset worth.

As with all new markets, crowdfunding real estate platforms will inevitably experience their share of growing pains. They will also have to get larger. In 2015, the sector totalled only $600m – the total commercial real estate market stands at $704bn.

China and the US are leading players in terms of capital volumes, with the UK pulling 3.4% of the global market. The rest of Europe has been slower to develop, though industry participants expect that will change.

Because crowdfunding has a limited share of the market, many investment consultants are unaware of the opportunities that exist. In the UK, the sector has some growing up to do before it can become a fully institutional proposition.