Is size all that important?

Two of the key debates regarding investment strategies are the universe of stocks outside the benchmark index, and the link between size (liquidity) and performance.

How big is the listed real estate securities universe? Our starting point is to analyse the size of the total universe for listed real estate, rather than just the index universe, which is most commonly used. In Figure 1 we show the composition of stocks in the Consilia Capital database, compared to a widely used benchmark, the FTSE EPRA/NAREIT Global index. To ensure a balanced comparison we have used their Developed and Emerging index, rather than the more commonly used Developed index. In terms of size, our universe equates to $2.5bn compared with $1.3bn for the EPRA index, and just over 2,000 stocks relative to just under 500 in the Developed and Emerging index. The most striking difference relates to the geographical spread where, in gross market capitalisation terms, Asia and Latin America have a higher weighting, and North America a lower weighting.

In addition to using market capitalisation as a liquidity measure, we can look at two other measures – analyst coverage and the percentage free float. There does appear to be a distinct cut-off point below $500m where free float starts to fall to 50% and analyst coverage drops to 2.

Do the smaller companies outperform?

The key question is, therefore, are investors rewarded for illiquidity? Interestingly, it would appear that they have been over the past 12 – but not three – months. Figure 4 shows that the least liquid bands have produced returns of 23% and 15% (in US dollar terms) compared with a range of 2% to 9% for the top three liquid bands in the group. Over three months, the reverse is true, which would appear to indicate clear cycles of liquidity preference being a key driver of returns. As expected, valuations (as measured by dividend yield) also appear to be higher for the more liquid bands, with volatility appearing to double at the lowest band, up to 60%.

What is the impact of liquidity on company valuations?

In order to test the impact of liquidity on company valuations, we have taken real estate stock market data from the UK and Europe for 24 companies, which were initially selected according to the value of their daily liquidity.  The reason for selecting 24 was to give an equal number (four) per size category (large, medium, and small) and differentiate between the UK and Europe. The small sample size reflects the lack of highly liquid companies that can be classified as large in global terms, as the European listed sector is small relative to the global listed real estate market. The dataset consists of daily data on trading volumes, prices, net asset values (NAVs), market capitalisation over a period of 10 years (2002–12), effectively before, during and after the global financial crisis. Using the Consilia Capital database we have grouped the sample companies by size, based on an initial filter of daily liquidity in the shares (as measured by value traded), and by listing region (UK and Europe).

The alternative approach to examining returns (be it required, estimated, or actual) for liquidity premia is to examine current valuations, in particular the premium/discount of the share price to NAV per share. This approach has two advantages:

• By using NAV as a benchmark, we can establish an absolute rather than a relative level for stock market versus direct market valuations. 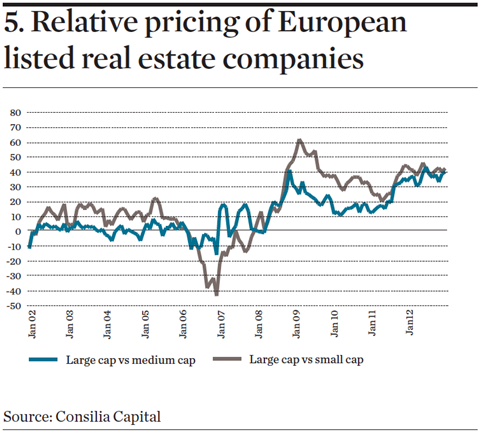 The same analysis in the UK shows that small firms are trading at a liquidity premium of 10-45bps, while the relationship between mid-cap firms and large firms has been reversed, with mid-cap firms trading at a premium to NAV and so 15-20% more expensive than large firms (figure 6). This reflects the attractive central London bias of UK stocks in this medium-sized band. The higher valuation means that their cost of equity capital is significantly reduced allowing a clear competitive advantage in acquiring assets and expanding the company’s size. 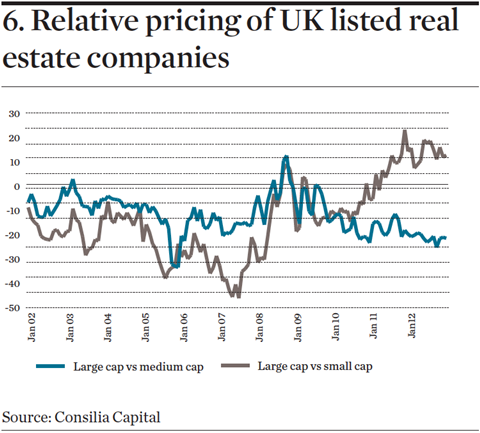 Is there a size impact for funds?

Having seen the size impact in listed real estate securities, we now analyse whether there is a size impact on fund performance. We have taken two periods for returns, from the peak of the market in February 2007 and the trough in March 2009. We believe that looking at distinct phases of a cycle could produce a more meaningful result than arbitrary calendar years. Firstly, in terms of the performance since the peak, we show in figure 9 the main mandates grouped by size. For the purpose of this exercise we have not included Japan or Global REITs as there is a relatively narrow concentration of asset managers and funds in these mandates. 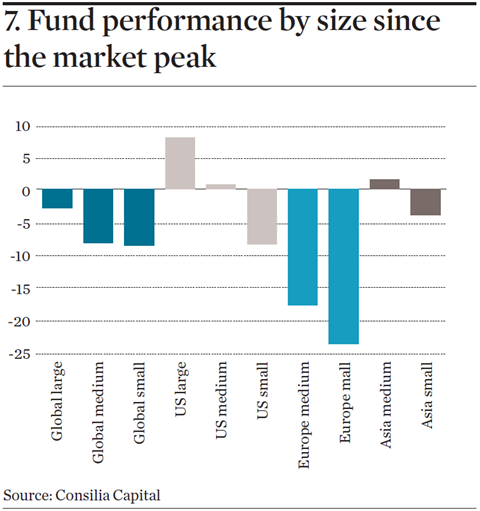 In this instance, across all the mandates, a clear pattern of outperformance by the larger funds emerges. However, it is worth noting that there is an element of performance bias as we have taken the size classification according to current assets under management. 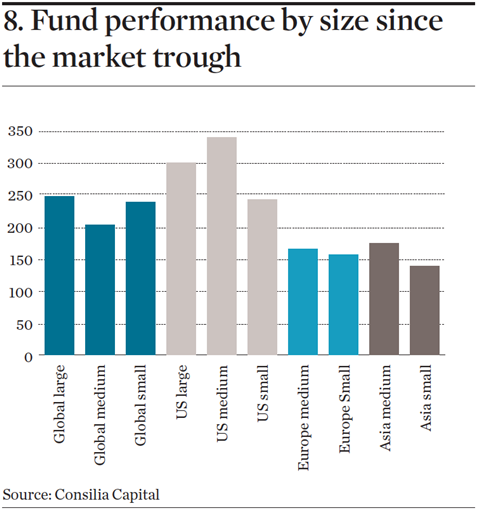 Turning to the performance since the trough, there is a similar – but not quite as consistent – pattern. We will undertake a more detailed analysis at a later stage to determine whether this is a persistent trend.

Finally, we look at volatility. Here it appears there is marginally higher volatility from smaller funds with European and Asian mandates, but no consistent similar trend for global and US funds. 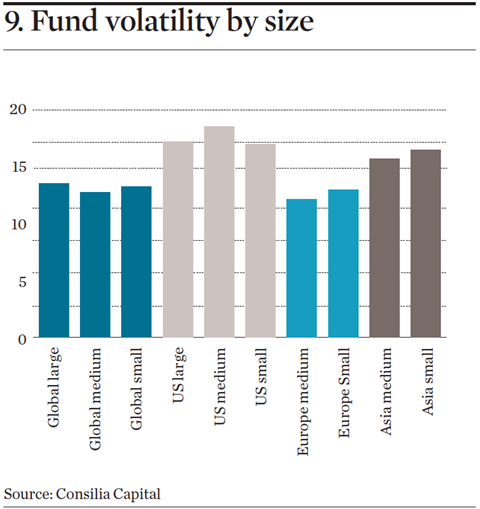 We set out to establish the size of the listed real estate securities universe relative to a benchmark index, and analyse whether there is a link between size and performance using both our databases of listed companies and real estate securities funds. Whilst there are obvious caveats to such a preliminary study our initial findings are as follows:

• In terms of size, our universe equates to $2.5bn compared with $1.3bn for the EPRA index, and just over 2,000 stocks relative to just under 500 in the Developed and Emerging index, with a greater weighting towards Asia and Latin America;

• In terms of alternative liquidity measures, there does appear to be a distinct cut-off point below $500m where average free float starts to fall to 50% and analyst coverage drops to 2;

• The least liquid bands in our universe have produced 12-month returns of 23% and 15% (in US dollar terms) compared with a range of 2% to 9% for the more liquid stocks in the group;

• Over three months, the reverse is true, which would appear to indicate clear cycles of liquidity preference being a key driver of returns;

• As expected, valuations (as measured by dividend yield) also appears to be higher for the more liquid bands, with volatility appearing to double at the lowest band, up to 60%;

• We find that, for both the UK and Europe, the valuation premium of larger companies versus small companies has increased significantly since 2008 (by 20% to 40%), which we can attribute to the increased value placed on liquidity after the global financial crisis;

• There are important implications for real estate investment strategy from these findings for all participants. If companies with similar assets are valued with a difference of 20% to 40% in the stock market, this gives an enormous competitive advantage to companies with higher liquidity;

• Since the peak of the market in February 2007, there is a clear pattern of outperformance by the largest funds, although this trend is less pronounced since the market trough in March 2009;

• There is not significantly greater volatility in smaller funds.