1
Interest rates US: The race is on
Investment 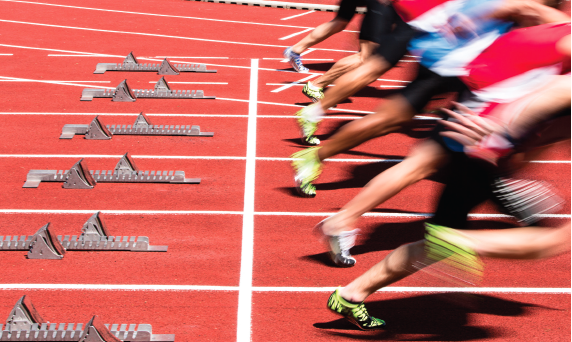 After years of ‘lower-for-longer’, interest rates are going back up. Christopher O’Dea reports on what this means for US real estate

The world’s major central banks have waved the green flag on a race that will hold the attention of real estate investors – one between financing costs and rental rates.

With economic growth perking up in the US, Europe and Japan, central banks – led by the US Federal Reserve – began to ratchet up their benchmark rates or suggest that monetary policy will be less liberal in future. Investors have been raising allocations to property during an interest-rate trough that has lasted almost a decade, but a tighter monetary regime sets up a new dynamic, pitting the negative effects of higher interest rates against the positive effects of an economic upturn. The banks’ official target rates serve as the benchmark for the cost of the debt, which plays an instrumental role in property markets.

The spread between real estate yields, or cap rates, and US Treasuries suggest that property is still an attractive alternative to bonds, but higher interest rates will increase financing costs and cut into the returns from property assets. Value-added and opportunistic strategies are most vulnerable since they rely more on short-term debt. Those strategies, often predicated on revamping property with an economically-sensitive plan, have become more popular in the current property cycle as investors take more risk to generate higher returns.

But investors tell IPE Real Estate that, despite concerns that rising rates could impair returns, there is a hope that property will benefit – as long as rate increases reflect economic vigour rather than a pre-emptive strike against inflation. That resilience stems from the unique fundamental nature of property: long-term leases mean it takes time to adjust asset values, while fixed-income securities are marked to market daily, and the ability to raise rents enables property owners to keep income returns in line with inflation – all of which produces a low correlation with other risk assets in a portfolio.

“The primary consideration is the race between interest rates and the rate of economic growth,” says Christopher Macke, managing director, research and strategy at American Realty Advisors. “Economic growth spurs demand for commercial property space, and the pace of growth will determine how much of a rise in rates is offset by rising rents and rising occupancy rates.” He adds: “It becomes a question of which one of those outpaces the other, or maybe they occur at the same pace.”

It is critical for investors to focus on the link between economic growth and rents, says Macke. Commercial property is a hybrid asset, he says, with components of fixed income and equity, and it is incorrect to assess commercial property and fixed-income securities from the same vantage point when rates are rising. Property, like equities, can benefit from an improvement in economic activity, unlike fixed-income securities. The reason is fundamental, Macke says: “Real estate income isn’t fixed.”

In fact, despite concerns that rising interest rates will spark higher cap rates – and lower property values – research from TH Real Estate suggests the relationship between interest rates and cap rates is weak. It showed that the correlation between 10-year Treasury yields and property value changes during periods of rising rates was just 0.08 over the 35-year history of the NCREIF Property Index (NPI). 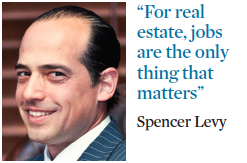 “Interest rates and capitalisation rates are believed to move in lockstep, with higher interest rates quickly translating into higher capitalisation rates and lower property values,” says Thomas Park, senior director of strategy and research for North America at TH Real Estate. But Park points out that if interest rates rise because of stronger economic growth, as is currently the case, tenant demand is also likely to increase. “If interest rates are increasing gradually and are likely to remain at, or below, long-term averages, as is currently expected, property would likely be well positioned to benefit.”

While they do not move in lockstep, there is a positive relationship between interest rates and cap rates, with the correlation between NPI transaction cap rates and 10-year Treasury yields since 2000 standing at a moderate 0.55, Park notes. Other variables like property market fundamentals, capital flows, and investor risk appetites also need to be taken into account. As a result, says Park, “the impact of rising rates on real estate performance is difficult to predict”.

That means it is vital for investors to be aware of which interest rate they are referring to when evaluating the potential performance of an asset or portfolio. “Interest rates are not a one-size-fits-all indicator,” says Macke. “There are short and long-term rates, and they are behaving very differently.”

Libor, the primary reference rate for floating-rate borrowings, has more than doubled since the Fed started raising rates at the end of 2015. But, Macke points out, the 10-year Treasury rate has only increased by 10bps since then. 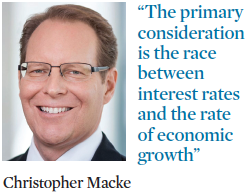 The variation in the rate of increase has implications. Macke says core real estate is generally financed with longer-term debt while opportunistic transactions are generally financed with short-term debt. “With short-term rates rising much faster than long-term debt costs, you would expect to see more effects on opportunistic strategies,” he says. Similarly, “investors more reliant on debt would generally be more negatively impacted in a rising-rate environment than investors less reliant on debt”.

A singular focus on cap rates is also too simplistic. A better indicator is the spread between cap rates and 10-year Treasury yields, a measure that reflects the property market’s ability to absorb increases in the Treasury yield without generating downward pressure on property values. The spread between NPI transaction cap rates and 10-year Treasury yields averaged 352bps in the fourth quarter of 2016, or 82bps higher than the long-term average of 270bps. By February 2017, the spread was 326bps, relative to the 10-year yield of 2.4% – a gap that “remains attractive on a current and historic basis”, Park says.

This tightening cycle began almost 18 months ago. With the 10-year Treasury yield only about 10bps higher today than they were then, there is no indication that official rate increases are being translated into higher Treasury rates, Macke says. “We’ve seen to this point that the transmission from Fed action to long-term rates has basically been zero – before we even get to the point of long-term rates potentially impacting cap rates.”

Economic growth also gives property owners the opportunity to raise rents as demand for commercial space increases. But although growth is the linchpin in the interest-rate scenario, predicting its trajectory is not easy. The most important factor in the economic outlook is employment growth, says Spencer Levy, Americas head of research at CBRE. Cities ranked in the top of the 2017 CBRE investor survey are also expected to post strong employment growth, he notes. “For real estate, jobs are the only thing that matters.”

The current populist wave in politics, Levy contends, is a result of discontent in developed countries that have “botched the transition” from producing goods to delivering high-value services, such as the design and operation of fuel-efficient jet engines and communication satellites. 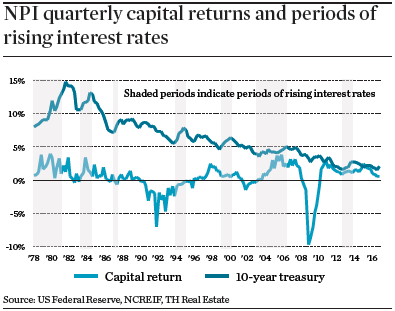 Although Levy expects that automation will reduce employment in goods-producing sectors, he cites four trends that leave him optimistic about US job and economic growth over the next two decades: the country’s potential to achieve energy independence from shale oil; a deep talent pool created by the US university system; the strength of the military, and the country’s underlying values system.

Perhaps most important, Levy says, is the resurgence of Keynesian ‘animal spirits’ since the election of Donald Trump. The debate about whether the ‘Trump trade’ reflects real change or just expectations is beside the point, Levy argues. “Sentiment matters more than facts, and it is real,” he says. That said, he adds, investors must answer a key question: “Is it sustainably real?”

The answer is crucial, Macke says. “If the business community starts to question the president’s ability to get his fiscal policy passed, that has implications for economic growth,” he says. “Policy uncertainty impacts expectations of not only fiscal policy and its impact on inflation, and therefore interest rates, but also business confidence – and the race between rates and economic growth goes directly to the heart of business confidence.”

How will REITs fare?

Research from Cohen & Steers shows that over the past 20 years there have been seven periods in which 10-year Treasury rates experienced a sustained rise of 50bps or more over a period of one year or more – and REITs produced positive returns in six of those periods, outperforming the S&P500 in five.

Changes in real estate fundamentals take time to work through the system, Cohen & Steers says, and “as long as the rise in long-term rates is commensurate with improvement in growth, REITs can perform well.”

US REIT prices declined sharply in late 2016 amid concerns about rising rates and slowing cash-flow growth. That left REITs trading at about the same level as two years ago, despite posting cash-flow growth in high single digits– REITs provided a 4.1% dividend yield in the fourth quarter of 2016, a 1.8% premium over 10-year Treasuries, compared with an average premium of 1.1% since 1990.

While REITs have become more sensitive to changes in bond yields since 2013, due to the end of quantitative easing and zero interest rates, Cohen & Steers says long-term REIT returns depend on fundamental factors such as cash flow, competitive positioning and the value of a company’s property holdings.

The price decline left many REIT shares trading at a discount to NAV, as much as 3.2% below the private-market value of property holdings. The discount presents an opportunity, as listed REITs generally trade at a premium to their asset value. Since 1990, Cohen & Steers shows there have been 10 instances where REITs have fallen to a discount to NAV after trading at premiums for at least six months. Most of these discounts occurred when the economy was expanding and fundamentals were strong – and in the subsequent 12 months REITs posted an average total return of 17%, and ultimately returned listed property to trading at a premium to asset values.