Infrastructure Debt: Too much of a good thing?

Infrastructure debt has very quickly established itself at the top of the asset allocators’ must-have list, leaving investment managers in the sector with plenty of capital and a vexing problem – finding enough projects in which to invest on acceptable terms.

After a three-year proliferation of platforms, infrastructure debt is already a maturing market, with leading managers scrambling to stake out differentiated strategies based on scale, global scope, credit seniority, or financial characteristics such as inflation protection. Across the sector, credit analysis and deal structuring are rapidly becoming more sophisticated. Predictably, margins are being pressured by the influx of capital from pension funds, and the main constraint facing most managers is the availability of projects that can deliver yield at adequate credit criteria.

A full 56% of institutional investors say rising valuations of infrastructure deals were their most important concern, Preqin says, with 43% expressing concern about how pricing might affect deal flow, and 30% worried about the performance of unlisted vehicles.

Nevertheless, significant further capital inflows loom. The pension sector is in the midst of a fundamental de-risking and infrastructure debt is in the sweet spot. Looking ahead, the need for infrastructure capital in Asia and the Juncker Plan to invest €315bn into European infrastructure over the next two to three years promise to generate additional supply of projects that will require debt finance.

That would help absorb the capital influx. But, with pension funds eagerly committing more capital to infrastructure debt strategies, some managers are already moving into the sub-investment grade sector to deliver the yield premium over corporate debt that pension investors expect.

“Sovereign debt used to provide the returns required in long tenors,” says Philippe Benaroya, co-head of infrastructure debt at BlackRock. But as banks have retreated from long-term lending and project finance, institutional investors have stepped in to finance infrastructure assets. “Several factors are great catalysts for the strategy,” he adds, “diversification being one of them, low correlation another, and the yield pickup from the illiquidity premium makes it attractive.”

Achieving diversification and securing a reliable income stream are virtually tied as the top priority for institutional investors in infrastructure, with 56% of investors ranking diversification as their main reason for investing in the asset class and 54% citing reliable income as the biggest draw, according to Preqin. The second rung of motivations reveals a dead heat, with 46% of institutions naming the inflation protection of infrastructure and the sector’s low correlation to other asset classes as major reasons to invest.

In a study of long-term asset allocations trends in pension fund and insurance portfolios, a team of credit and structured finance analysts at Bank of American Merrill Lynch says demand for infrastructure assets marks a structural shift as “pension funds seek to replace conventional fixed-income assets with more innovative and less conventional fixed-income assets”. It’s a shift that “we think is unlikely to be reversed”.

Plan sponsors, BAML says, are pushing pension funds to reduce risk appetites as a “quid pro quo” for maintaining financial support and responsibility for funding shortfalls. “Pension funds are increasingly moving to a more matched position,” the analysts say. “In our view, when a DB plan de-risks, it is extremely unlikely to re-risk. There is a one-way ratchet at work here.”

The potential capital flows are significant. Preqin says institutions have already deployed nearly $250bn into infrastructure funds, and BAML estimates that a shift by EU pension funds alone of 5-10% of conventional fixed-income assets to infrastructure, asset-backed securities and other direct lending could total another €500bn of capital. “For this potential to be fully realised,” BAML says, “pension fund advisers may need to get up to speed quickly on new investment opportunities.”

Since opening, MIDIS has leveraged Macquarie’s infrastructure expertise to cover increasingly broad portions of the pension fund market. Larger plans were the earliest entrants, but managers are now tapping plans of all sizes. MIDIS manages an £800m fund for UK investors, and approximately £2bn in separate accounts raised mostly from pension funds with £200m or more in assets, and in 2015 it raised a pooled infrastructure debt fund for investors below that mark.

While allocations to the asset class vary, pension funds are increasingly making infrastructure debt a “modest portion of their portfolios”, Humphrey says. And if not quite made-to-measure, MIDIS tailors accounts to each funds’ financial profile. Pension clients “generally specify the preferences in terms of the sort of duration they require, and whether they need fixed or inflation-linked cash flows. Beyond that, they accept that you can’t structure a portfolio that’s completely bespoke,” he adds. “It’s going to be a collection of cash flows, some fairly lumpy cash flows, that go out 20 to 30 years and have a certain sensitivity to inflation and interest rates.” 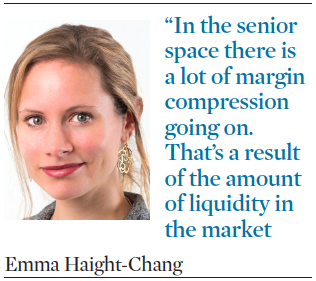 The illiquidity premium compared with liquid corporate bonds runs between 30bps and 50bps, says Benaroya. That makes infrastructure debt “attractive beyond the diversification and liability-matching benefits”, he adds.

While cautioning that the assessment of the return margins on infrastructure debt are not a science, he says, in general, infrastructure debt will return about 180bps over swap rates, with about 50bps compensating for the illiquidity of infrastructure. The precise margins depend on the financial, operating, and legal characteristics that comprise the risk profile of each project, and collectively, each portfolio.

What’s certain is that the influx of capital is depressing returns as more investors compete for the available financings. Benaroya says margins for long-tenor debt are running between 150bps and 250bps. “The average is slightly below 200 and it really depends on credit quality and the unique features of each borrower,” he says, but with ample capital in the sector “it has become more difficult to get above 200bps”.

Emma Haight-Chang, principal in infrastructure debt at AMP Capital, says: “In the senior space there is a lot of margin compression going on. That’s a result of the amount of liquidity in the market.” In addition to asset managers already in the space, banks and insurance companies are starting to field infrastructure debt teams, she says. The margin for availability-based public private partnership debt, in which the revenue risk of project is not transferred to private-sector investors, is about 100bps, says Haight-Chang, a level that results in “epically low” borrowing costs.

AMP focuses on junior debt, where margins – the amount paid to lenders above a base cost, usually LIBOR – are significantly higher. That margin is currently about 350bps, and can go higher, says Haight-Chang. Those margins help AMP achieve its target IRR of 8-10% for Infrastructure Debt Fund II, which is currently being invested; AMP commenced fundraising for its third infrastructure debt fund late last year, seeking $2bn from institutional investors. Haight-Chang says Fund II has achieved a 9.6% yield on its assets. While clearly an attractive yield, “it’s a difficult market in which to get that”, she says.

Earning those higher margins requires managers to roll up their sleeves. “We create value for our LPs because we provide the structuring expertise necessary to make yourself, as a lender, sufficiently attractive for infrastructure sponsors to use a mezzanine piece despite the higher price,” says Haight-Chang. “Bilateral negotiation allows us to optimise or margin, and produce the most robust downside protection that we can for our LPs. We’re aiming to get very high returns on very low-risk assets,” she adds. “It’s something of an art, and so we can’t do every deal in the market.”

Are risks being understood?

Securing downside protection requires debt managers to mitigate the inherent risks of infrastructure assets in order to make the high income streams a reliable substitute for corporate or government bonds. And although infrastructure involves property, and is sometimes classified in property allocations, land itself is not a good source of protection, says David Cooper, executive director of debt investments at IFM Investors, which manages $4bn in infrastructure debt for institutions globally.

“In most infrastructure deals, you don’t want to be secured by the property,” Cooper says. Projects sit on land, but require technical expertise to operate that’s beyond the scope of lenders. In the case of a hospital, for example, “you need to know about how to run it, if you find yourself in the difficult situation of needing to take possession of a hospital”. Such facilities can’t be used for any other purpose, nor can they be easily removed to make land available for other uses. 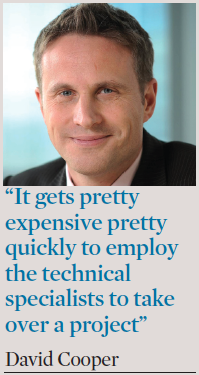 Infrastructure lenders “look to the contract to provide protection as good as, if not better than, an investment in property,” Cooper says. In the event of a problem with a power plant or other asset, proper contracts “will oblige someone to pay you specific monies,” he adds. “A property is only worth what someone will pay you for it.”

Cooper says risk mitigation is becoming a concern because “there’s a trend at the moment for the pension sector to do this themselves”. Regulators are looking carefully at infrastructure contracts to ensure pension funds aren’t taking on excessive or hidden risks by investing in a sector intended to reduce their financial risk.

Even when contracts give secured lenders “step-in rights” allowing them to intervene if a project is not performing, “you’d rather not do it,” he says. “It gets pretty expensive pretty quickly to employ the technical specialists to take over a project. It’s more likely you’d sell the assets.”

An increased focus on the hazards of infrastructure lending illustrates that the risk-reward proposition in the market is adapting to the influx of capital. With pension funds looking for the most stable long-term income streams to replace bond coupons, Preqin says “appetite for the favourable characteristics of brownfield sites among investors has increased the prices of these assets at a faster rate than infrastructure at both the greenfield and secondary stages combined”.

There is no doubt it is a sector that demands scale. The average deal size of an infrastructure asset reached an all-time high of $626m last summer, and ended 2015 at a yearly high of $541m, Preqin says.

The ability to compete consistently for transactions of $100m or more will be essential to achieving adequate returns for clients, says Benaroya. “If you’re capped at $50m,” he says, “you’ll be cut off from larger deals and won’t get access to the borrowers.” That’s important, he adds, “because transactions in excess of $100m is where things start to become different – you can partner with banks and sponsors, and secure better terms.