In anticipation of rising inflation and interest rates, investors have been moving into real assets. Christopher O’Dea reports

The prospect of rising inflation emerged as a key investment risk during 2016. As the deflationary effects of falling energy prices faded, improving economic growth and tighter labour markets prompted the US Federal Reserve to start raising interest rates, and the European Central Bank adopted a more doubtful tone about whether it would maintain its accommodative policy.

“The idea that inflation and interest rates will be lower for longer seems unlikely at this point,” according to Ronald Temple, co-head of multi-asset and head of US equity at Lazard Asset Management. The convergence of interest rates and inflation over the past 30 years appears to have stalled, and may even be reversing, he says. Deflation risks have “effectively disappeared”, Temple says. Based on cyclical factors alone, inflation of 2-2.5% is probable. It is time, Temple notes, “for investors to re-evaluate their asset allocation decisions to ensure portfolios defend against rising inflation”.

Higher real assets allocations are emerging as the main option for protection against inflation. Real assets offer a close correlation with inflation, and the ability to raise fees on infrastructure through inflation-linked contracts allows income to increase over time. Rising construction costs in an inflationary environment lifts the value of new assets, and also increases the replacement value of existing assets, giving owners a capital gain.

New concepts are emerging that are addressing the most serious exposures of mature and younger plans. “Making sure portfolios have sufficient assets with some form of inflation protection is a key issue we’re making clients aware of in 2017,” says Anton Pil, managing partner of JP Morgan Global Alternatives. “People haven’t worried too much about inflation for the last decade and I’m a bit surprised that allocations probably aren’t where they should be.”

Determining the correct degree of inflation protection depends on the portfolio, says John Goodreds, head of alternative solutions at Nuveen/TIAA. Given that most pension portfolios carry a large exposure to public fixed-income securities, in many cases, “you’ve got some headwinds”, he says. “We can debate if it’s going to be quick, or gradual, but most people feel interest rates are headed up, and so is inflation. When you start to think about what those factors mean, investors have to be asking, what is my risk in an inflationary environment?” 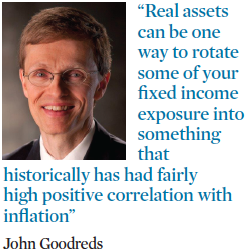 In many cases, “that brings the argument for adding more real assets into the spotlight”, Goodreds says. “Real assets can be one way to rotate some of your fixed income exposure into something that historically has had fairly high positive correlation with inflation. Generally speaking, most real asset categories have performed fairly well in inflationary periods and, in our view, the historical performance correlations should continue.”

Goodreds says: “Many investors are rethinking what should their plan’s optimal allocation to real assets should be,” Goodreds says. “It’s less a conversation about whether to invest in real assets and more focused on creating an optimal portfolio from the numerous sub-sectors in real assets.”

At present, many pension funds have an allocation to real assets in the low to mid single digits. “Being prudent, they want to increase that allocation but they want to do it in a gradual, thoughtful manner,” Goodreds says. “It’s not necessarily easy to get efficient, well-structured exposure to the real asset sector, and for many institutions, moving from a 5% to a 7% or 8% allocation involves a large underlying dollar amount.”

The optimal real assets shield against inflation reflects the financial and demographic characteristics of each plan. “How plans are deciding how much inflation protection they want is very much a country-by-country question, and the most pertinent consideration is where they are in their journey in terms of cash-flow profile and maturity,” says Duncan Hale, secure income specialist at Willis Towers Watson (WTW). “The clients most eager to get access to inflation-linked cash flows are definitely in the UK.”

In the UK, “pension plans are significantly more mature in terms of their liability profile than they are in other markets”, Hale says. “The liabilities of UK clients are often inflation-linked, unlike for instance, in the US. But with inflation-linked UK government bonds yielding a negative 1.5% this year, for the UK there’s a real focus on cash flow generative inflation-linked assets.”

The fund will hold 50-60% of its assets in lower-risk real estate strategies that are closely linked to inflation and involve strong counterparties and credit rankings, Hale says. These could include very long leases with explicit inflation linkages, ground rents and social housing. Ground rents, for example, in which a building owner leases the land on which a property stands, typically rank above mortgage debt on the building in seniority, creating added certainty to the cash flows from the ground lease. 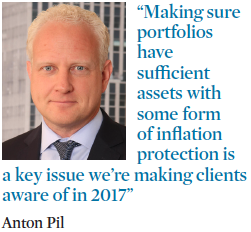 Hale says WTW is also discussing with Australian clients how the fund might be paired with more traditional assets to address the needs of plans entering the decumulation phase.

While property remains an anchor of sorts in the real assets bucket, “investors are expanding the definition of real assets to include infrastructure, commodities, timber, oil, energy and several other assets”, says Collin Bell managing director and client portfolio manager in the fundamental equity team at Goldman Sachs Asset Management, responsible for real asset and equity-income-related portfolios.

The value of real assets in an inflationary environment is two-fold, Bell says. In addition to predictable cash flow, which gives property and infrastructure assets bond-like characteristics, real assets enable owners to grow their cash flow. “It’s that growth of cash flow that provides greater interest rate resiliency and greater inflation hedging benefits than a bond would,” Bell says.

Infrastructure contracts are often explicitly linked to inflation, providing an “embedded growth escalator of the term of the contract”, he adds.

The other source of inflation resilience is that inflation increases building costs. “That translates into the replacement value for the existing assets going up,” Bell says.

To determine whether portfolios are generating real returns that keep pace with inflation, most investors typically target an inflation-linked bond yield relevant to their country or region plus a premium – or an inflation measure plus a premium, Hale says. To achieve a nominal 7-9% real return, investors will seek to achieve a 3% return to match long-term inflation, plus 4% to 6% depending on the amount of risk in the portfolio.

Some US pension plans have restructured their strategic asset allocations to reflect new thinking about real assets. Earlier this year, the California Public Employees’ Retirement System  combined its property, infrastructure and forestland allocations into a single real assets category based on the fact that the three sectors were “seeking similar underlying investment characteristics”.

The 13% real assets allocation replaces separate allocations of 1% to forestland, 1% to infrastructure and 11% to property. In May, the Illinois Municipal Retirement Fund invested $650m (€582m) with Cohen & Steers and Brookfield as part of a new listed real assets allocation of 2% of plan assets, which was established last year after carrying out an asset-liability study.

Pension managers have recognised the importance of protecting portfolios against inflation and have begun to increase real asset allocations. “The sense of urgency has increased,” says Goodreds.  “Institutions have studied the real assets sector, they’ve come up with some initial target allocations, and they’re now looking to put capital to work.”

Urgent attention is well-advised. Pil says the erosion of asset values “is not something you can adjust for once you actually see the inflation. At that point, you’ll probably be too late.”