Fees: Paying over the odds?

Are investors paying too much in open-ended funds? Douglas Crawshaw explains why the industry should switch from amortisation to an offer-spread methodology

There are concerns about the way in which the cost of investing in open-ended unlisted real estate funds is being built into fund pricing. While it is accepted that there is a cost to investing new capital when buying buildings, how this cost is passed on to the investor is important.

The traditional ‘offer-spread’ approach means the cost of buying a building with newly subscribed capital has been charged against that capital. While fair to both new and existing investors in a fund, this does pose a problem to the fund manager wanting to make its fund attractive to short-term investors, since performance of capital is lower in the  early stages of deployment.

Some managers amortise purchase costs over a set number of years. This reduces the upfront costs and makes short-term performance look better when compared with a fund using the traditional offer-spread methodology. It also makes such funds more comparable with other funds already using the ‘amortisation’ method, making the sale of those funds to prospective investors easier.

In itself, the amortisation method is not a problem if the costs of investing an investor’s capital were only attributed to that investor. However, the fundamental difference between the two methodologies is that the offer-spread approach applies the costs of transacting only to the investor who is buying into the fund while the amortised approach detracts the costs of those transactions from the fund’s value, meaning that all investors bear them proportionately.

A longer-term investor that has subscribed to an open-ended fund that continues to raise capital in the future faces not only paying for the investment of its own capital but also a share of every other investor’s in the future too. The investor in effect ends up paying more in aggregate by investing in such a pooled fund than it would if it bought buildings direct through, say, a segregated account or via a fund that used spread pricing.

The analysis in the figure assumes the fund produces no performance (positive or negative) and relates to a seed investor in a new fund that then continues to raise capital each subsequent year. An existing fund will have either started as a spread fund and then converted to amortising, or grow up to £1bn as an amortising fund. In the former scenario, early investors that have paid a spread will suffer dilution by later investors’ costs after it has converted to the amortising structure.

In the latter, early investors would be penalised in the way the model is showing. As the fund must pay the same total sum of transaction costs, the later investors are paying less (given the fund’s prevailing assets under management at that time) and, by definition, the earlier investors must have paid more. We believe this is unfair to both early and long-term investors, as well as running the risk of encouraging, for example, more frequent trading. 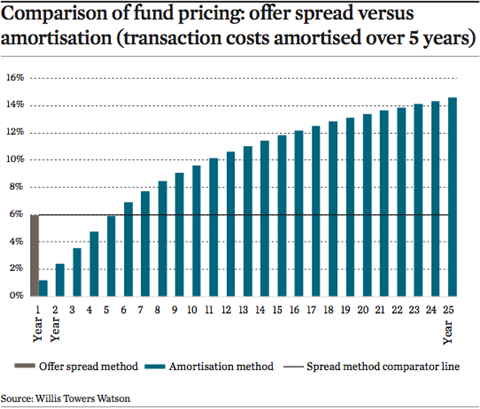 • Managers have interpreted NAV calculation guidance from the European Association of Investors in Non-listed Real Estate Vehicles (INREV) as promoting the amortisation approach;

• Managers that use the traditional spread are finding it difficult to market their funds to investors more used to the amortisation approach.

Managers investing in continental European real estate – and do not already adopt the amortised pricing methodology – are typically starting to design new funds and/or switch the pricing of existing funds to be on the amortisation basis.

“We believe that investment managers should adopt the spread approach to better reflect the actual costs of buying and selling property. In addition, investment managers should point out the difference between this and the overall costs of the amortisation approach to existing and potential investors so that they can assess the difference in cost in order to take an informed decision”

However, we believe that these two reasons are not necessarily appropriate justification. Firstly, we understand from reviewing the INREV guidance that the methodology for amortising purchase costs when calculating the net asset value is only intended to enable a fair comparison of fund performance and not for pricing new subscriptions.

Secondly, we believe that, while managers may well be finding it harder to market offer-spread priced products to investors more used to the amortisation approach, this is because the latter is perceived to be lower cost. While we are sympathetic to this view, we feel that investors should be aware of the true long-term costs of adopting this approach compared with the traditional spread basis. We believe investors would, in effect, end up paying more than they should if they invested in a fund that uses amortisation for fund pricing and that this should be pointed out to them.

Allied to this is the incentive for short-termism in investment in funds that have adopted the amortisation approach. In other words, investors may find it beneficial and cost-effective to trade in and out of funds more frequently to take advantage of the lower initial cost of investing in the early years of an investment compared with staying in a fund long term.

Managers have tended to try and discourage this by introducing an exit charge to penalise exiting too soon after initial investment. It may nevertheless introduce an unintended volatility to a fund, adversely affecting the effective deployment of a fund’s strategy and ultimately its performance.

We believe that investment managers should adopt the spread approach to better reflect the actual costs of buying and selling property. In addition, investment managers should point out the difference between this and the overall costs of the amortisation approach to existing and potential investors so that they can assess the difference in cost in order to take an informed decision.

Investors should be aware of this issue when considering fund investments and assess the additional cost that the end-investor will ultimately bear for subscribing to a fund that prices using the amortisation methodology.