Transportation: For whom the road tolls

With pension funds facing another year of record-low interest rates, the question of how to replace dwindling income from fixed-income portfolios will take on added urgency. While energy projects have been grabbing the headlines, transportation assets are becoming an increasingly attractive investment option.

Even when growth is sluggish, essential goods must still move from factory to shop shelves, and food from field to grocer’s rack. That movement – not to mention the movement of billions of people going about their lives – requires an intricate network of road, rail, ship, and air conveyance. Most people – especially in developed countries – take transport infrastructure for granted, assuming it will be available and in good repair. But transport networks require astute planning and careful maintenance, and that is an opportunity for institutional investors, because without transportation, today’s globally integrated economies would grind to a halt.

Pension funds are turning to infrastructure in a big way, and 2014 marked an acceleration of institutional enthusiasm for big projects promising steady income for many years down the road.

So far, infrastructure investments seem to be delivering on the investment proposition of modest but predictable returns – not as lofty as private equity, but carrying less risk than alternatives offering similar yields. The median internal rate of return on infrastructure funds launched between 2008 and 2011 was between 7.6% and 11%, “suggesting that, in many cases, these funds are delivering the stable returns that investors look for when allocating capital to the asset class”, says Preqin.

Macquarie, one of the world’s biggest infrastructure investment managers, invests across the full spectrum of infrastructure assets, and owns one of the world’s largest developers and operators of toll roads – an Australian-listed company that provides insight to the key components of often-complex infrastructure vehicles. The AUD1.5bn (€1bn) market cap Macquarie Atlas Roads (MQA) operates the Autoroutes Paris-Rhin-Rhône (APRR), a toll road network located in the east of France that links Paris, Lyon and Geneva and connects to German highways, the Dulles Greenway, a toll road in Northern Virginia in the US in one of the wealthiest counties in the country, and several other toll roads, including the Chicago Skyway and Indiana Toll Road in the central US.

A10 toll gate in France: the government has announced a delay to price increases on road tolls

The MetLife group was the only investor able to meet the borrower’s maturity targets in three currencies, the US dollar, euros and Danish kroner, Tanyeri says. MetLife has invested approximately $1.3bn in 10 airports in Europe, Australia and the Americas.

Interest in toll roads, ports and airports is part of a wider trend. “We are seeing a sustained rise in interest from investors in relation to real assets investment solutions,” according to a new report on real assets from Hamburg-based Aquila Capital Investment. “The prevailing market limitations and challenges that lie ahead support a strong investment case for considering real assets as a core holding within a diversified investment portfolio.”

Aquila contends that the 40-year credit expansion since the 1960s – the first of its kind in peacetime – was a one-off event in economic history, spurred by political efforts to avoid global economic crises and smooth economic cycles with deficit spending and social programmes. The bursting of the equity and real estate bubbles sparked an abrupt shift towards saving in the private economy and Aquila says that  “reduced demand for credit is likely to persist for a long time to come”.

With economic growth suppressed by continued deleveraging, long-term interest rates are likely to fluctuate at levels close to the nominal growth rates of major economies – a dire threat to bond portfolios. If German interest rates were to reach 4% in 2024, Aquila’s analysis says the total return from interest payments and price performance for a 10-year bond held at a constant 10-year maturity would amount to -0.99% per annum, before inflation. Compared with the 7.5% annual return from German 10-year bonds between 1991 and 2014, it is clear that pension funds can’t find a replacement fast enough.

The MSCI Global Direct Asset Infrastructure index launched in November 2014 was based on the investment performance of physical investments across global markets, with greatest exposure to Australia and Europe. Although the index is consultative, it provides useful insights into performance of various dimensions of the asset class, including geography, risk profile, stage and sector, as it builds its depth and breadth of coverage across markets,.

Figures 1 and 2 show the global performance of the power and transport assets that make up the largest sub-sectors of the index, at 47% and 24% respectively. While both sectors have performed strongly during 2014, it is transport that has outperformed over the longer term, at 15% a yea r compared with the 12.5% recorded for power.

Although the transport and power sectors cover very distinct activities, they can each be disaggregated in much more detail. Transport includes airports and all modes of surface infrastructure (roads, bridges, tunnels, transit systems, and railways), while power includes transmission, distribution, and traditional and renewable sources of generation). The specific performance trends of these different sub-sectors will be revealed in due course, as the index grows in coverage. 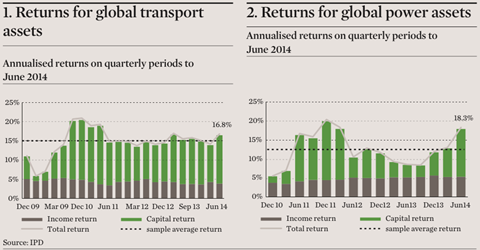 Institutions have ramped up infrastructure allocations, to $282bn as of March 2014, compared with $98bn in 2007, according to Preqin, and last year marked a sea change – the percentage of institutional investors planning to maintain or reduce capital commitments to unlisted infrastructure funds in the year ahead declined sharply. As of August 2014, Preqin says, 57% of institutional investors said they plan to increase such allocations in the year ahead – and 87% intend to maintain or increase allocations over the long term.

As a result, the size of direct transactions in transport investment is increasing. A Preqin analysis for IP Real Estate shows that the value of the average transport infrastructure deal completed globally grew from $528m in 2008 to a high of $716m in January 2015. The reported aggregate value of transport deals has been rising steadily to about $60bn in 2014, from a 2009 low of about $25bn, according to the Preqin analysis.

Reflecting transport’s essential economic function, the number of transactions completed in 2009 dipped just slightly, to 100, from 134 in 2008. Transport deals rebounded strongly in 2010, to 154, and peaked at 175 transactions in 2013, according to Preqin’s analysis. The rise in deal size tracked the broad increase in the size of infrastructure funds – in 2014, 42 unlisted funds were closed, raising a total of $38bn, compared with 69 funds raising $44bn in 2013.

Private fund managers are tight-lipped about their infrastructure funds. Several consultants mentioned JP Morgan’s open-ended institutional infrastructure fund as a top performer that held about 25% of its assets in the transport sector. JP Morgan declined to comment on the fund, citing disclosure restrictions that prevent managers from discussing open-ended funds, which are effectively always in a state of fundraising.

Managers and institutions are also increasingly competing for the same assets. In Preqin’s 2015 infrastructure outlook, research director Andrew Moylan notes that 56% of institutional investors planning to put capital to work in infrastructure this year are targeting direct commitments, up from 29% two years ago. “Fund managers are now seeing more competition from institutional investors when doing deals,” Moylan says.

But there are risks. For roads, one risk is lack of traffic. The Macquarie Atlas subsidiary that runs the Indiana Toll Road in the US filed for bankruptcy court protection last September. It was a victim of an eight-year decline in traffic and a 1985 legacy contract that kept the toll collected by transponders far below the current cash-payment rate. The toll structure was part of a 2006 deal in which Macquarie and Spanish company Ferrovial’s Cintra Concesiones paid Indiana $3.8bn for a 75-year concession.

Political changes pose another risk. While the essential nature of transport assets can provide investors a steady stream of income, the fees charged on low-risk assets like a major road can also become a target for politicians looking for savings on their own budgets. At the start of this year, French prime minister Manuel Valls announced that the government was delaying toll increases due to take effect for the APPR in early February.

Valls set up a working group to “assess options for renegotiation of the existing concession agreements or in the alternative, the termination of these agreements”. The delay followed a report from France’s competition watchdog last September saying the profitability of toll road operators in France could not be justified in light of the costs of operating the roads and the low-risk nature of the assets.

In a statement to the Australian stock exchange, Macquarie Atlas said it planned a court challenge to the French government move, saying it, along with the major shareholder in APRR, the French company Eiffage, would “protect their contractual rights”. It is a cautionary tale for institutions racing headlong to replace falling fixed-income yields with infrastructure earnings. After all, the same politicians who supervise central banks oversee essential service agencies and as consultancy PCA notes, “regulated assets are subject to government changes.”