Investors like the long-term income of infrastructure, but the journey can vary depending on the type of asset, writes Rachel Fixsen

If infrastructure investment appeals to institutional investors primarily for the long-term income streams it can provide, then transportation assets should surely be one of the most sought-after asset sub-classes. Ultra-low bond yields have been one of the main forces pushing pension funds into infrastructure investment, but when it comes to matching the very long-term liabilities of some schemes, road assets can beat the longest-dated sovereign bonds on offer.

North American pension funds have been taking an active interest in the sector, particularly in the past few years. In June 2016, the Canada Pension Plan Investment Board (CPPIB) and Ontario Teachers’ Pension Plan (OTPP) linked up with Mexican infrastructure firm Impulsora del Desarrollo y el Empleo en América Latina (IDEAL) to invest CAD1.35bn (€1bn) in the Arco Norte toll road in Mexico. Six months before that, the two Canadian pension funds had invested together in the Chicago Skyway toll road in the US.

Last May, the California Public Employees’ Retirement System (CalPERS) made its first direct investment move into domestic road infrastructure, buying a 10% share of the Indiana Toll Road Concession Company (ITRCC). ITRCC operates and maintains the 157-mile Indiana Toll Road (ITR) under a concession agreement awarded by the Finance Authority for the State of Indiana.

Paul Mouchakkaa, managing investment director for real assets at CalPERS, lists the advantages for the $302bn US pension fund: “ITR is an essential piece of road infrastructure in the US with a long history of traffic. The long-term concession agreement with the [Indiana Finance Authority] – 65 years – provides the buyer with an attractive toll-setting mechanism and, given the finite nature of the concession, eliminates terminal value risk, thus increasing predictability of returns.”

Even though there was obviously no guarantee of the volumes of traffic passing through ITR, it is the main highway for crossing the state, connecting the Ohio Turnpike and Chicago Skyway. It is used primarily by commercial traffic, Mouchakkaa says. 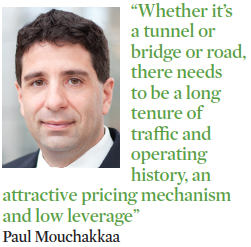 “Road infrastructure definitely can be a suitable investment for a pension fund such as CalPERS, although there are mitigating factors that should be taken into account, such as whether or not there’s a lot of volume risk,” he says. “And whether it’s a tunnel or bridge or road, there needs to be a long tenure of traffic and operating history, an attractive pricing mechanism and low leverage – because leverage can amplify the volume risk.”

Mouchakkaa also cautions that there must be some social acceptance of the road infrastructure involved. “You don’t want to be caught investing in a road where there’s a lack of acceptance that could end up becoming a groundswell of public opinion leading to [the cancellation] of the concession,” he says.

Looking ahead, Mouchakkaa believes more greenfield opportunities will come to the market in the US – an opinion he held, he says, even before the November presidential election. “In that case, an investor is not just taking the risk of people using the road, but also the development risk,” he says.

“At CalPERS, though, we are more interested in stable income-generating assets as diversification for our equity risk, and doing greenfield toll road development would be a pretty tall order for us. But if I am correct, there will be more of these assets on the market in five to 10 years’ time and, at that point, they will have a longer operating history, which would be more appealing for us.”

Toll roads, like many infrastructure assets, are subject to political risk. This was illustrated in the US last year when the North Carolina House of Representatives voted to cancel a 50-year toll road contract with Spanish developer Cintra Infraestructuras, threatening a $648m project to add two variable-toll lanes alongside existing free lanes in a section of US interstate highway 77. Residents in Charlotte had objected to having to pay tolls to commute to work when people in other districts of the city had access to more free lanes that had been built at a time when there was more state funding for roads. 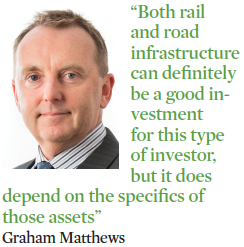 Graham Matthews, CIO of Whitehelm Capital, says: “Both rail and road infrastructure can definitely be a good investment for this type of investor, but it does depend on the specifics of those assets. The right kind of asset can offer a strong stable return over time and that can sit very nicely in portfolios for investors — particularly of those who are looking at asset liability matching, as well as those after inflation protection.”

Whether the investment is suitable, depends on the type of asset, he says, as well as the contractual structure around it – and whether it is structured as equity, junior debt or senior debt, for example.

“There is big difference between investing in an established toll road, versus a greenfield development that has a start-up risk,” Matthews says. “There have been notable examples of investors losing money on that second type of asset, and the big thing to note is that these investments involve private equity risk, which we wouldn’t see as core infrastructure investment.”

Investing in non-toll roads, where the public sector pays a fee to the owner or operator, tends to yield revenues linked to inflation, he says, whereas the income from a toll road asset depends on the number of cars using it — which can depend on the level of economic activity.

Consulting firm Mercer has seen interesting opportunities in both road and rail infrastructure for pension funds and other investors, says Toby Buscombe, global head of infrastructure. But critically, he says, only as apart of a well-diversified portfolio.

“The main advantages for investors are that, like other real assets, transport and rail as part of a wider real asset portfolio offer diversification away from more traditional assets,” he says. “You are buying into a different set of risk and return drivers, with many concessions providing a link to inflation. And since they provide something that’s essential, these assets should preserve their value over the long term. There are a number of tailwinds that should continue to support the volume of investment opportunities available to investors across the transport space over the next few years.” 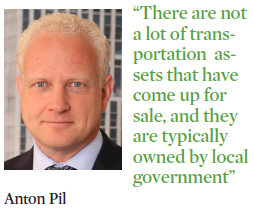 These include the funding constraints facing many governments around the world and the number of existing owners of transport assets that are under pressure to sell, such as closed-ended funds at the end of their hold periods.

“We are also continuing to see some corporate disposals with some companies who are not natural owners of these assets being forced to focus on their core business,” says Buscombe. “We’re seeing this particularly in the road sector, but there’s no reason not to think that these opportunities could start appearing in rail.”

Infrastructure inevitably carries political risk with it, Buscombe says, but there are ways of mitigating it. “It’s a case of financing those things that are genuinely essential and inherently justified, and avoiding investment in those assets that are overly dependent on state support,” he says. “Investors should also work with people who’ve got a responsible approach to asset management in a changing world.”

Both road and rail assets will always have some exposure to local decision-makers, he says, and this is why portfolio diversification is so important.

Take the train instead?

Australia’s second-largest not-for-profit superannuation fund First State took a 62.5% stake in a consortium known as ALTRAC, formed to develop the Sydney Light Rail (SLR) initiative. The consortium has a concession up to March 2034 to get the service up and running and operate it, along with the already existing Inner West Light Rail in Sydney.

The pension fund has said it does not consider particular projects solely on the financial returns they promise, but that just as important is “universal ownership” – a term describing the approach of large institutional investors that see themselves as having a financial interest in the wellbeing of the economy as a whole.

A large stake in the UK’s largest train leasing company, Angel Trains, came up for sale in 2015 with the Arcus European Infrastructure Fund 1 ending up selling it to an AMP Capital-led consortium that included PensionDanmark and Swiss Life Asset Managers. At the same time, Canada’s Public Sector Pension Investment Board (PSP Investments) almost doubled its stake in the company. PensionDanmark said at the time that the Angel Trains buy was a new type of investment that would add to diversification in its infrastructure portfolio.

Matthews notes that rail assets are even more varied than road assets. “There are lots of different ways of investing in the sector,” he says. “Institutional investors can potentially invest in train sets – buying into a rolling stock company and leasing the trains out to operating companies – or above-track assets, where they own both the rail track and rolling stock, or they can invest in the train operating companies themselves. In some cases, all three are bundled together.”

Depending on the jurisdiction, Matthews says, “and depending on whether the network carries passengers or freight, the assets can have quite different risk-return characteristics”.

Anton Pil, managing partner, JP Morgan Global Alternatives, says transportation infrastructure offers an interesting investment proposition, “but the availability of those assets is fairly limited”. He says: “There are not a lot of transportation assets that have come up for sale, and they are typically owned by local government. While this might change in the next seven years or so, it is too early to tell, and a lot of PPPs (public-private partnerships) are still early in their infancy.”

Investors looking for exposure to road infrastructure will need to be prepared to invest at an early stage, Pil says, and it is difficult to find “shovel-ready” projects. However, in a few years’ time, the availability of transport opportunities is expected to grow. “While the opportunity set is quite small in transportation, we do think there are some interesting opportunities on the debt side within rail,” Pil says.

Potential investors in road infrastructure – whether in debt or equity – need to consider key aspects of an investment such as what the road usage is likely to be over the longer term, says Pil.

“Stability of usage over time is important, and depends on demographics, location, growth trends in the local jurisdiction,” he says.

“These assets are highly connected to the health of the economy surrounding them and, as with infrastructure assets generally, you have to be doubly aware of the long-term outlook, because the assets you own are less liquid than many other investment types.”