1
Roads: The FAST and the furious
Infrastructure

The FAST Act has diverted public money to the US’s crumbling roads, but not enough. Is this an opportunity for investors? Christopher O’Dea reports

In January, some of the biggest manufacturers of road-construction machinery unveiled their latest creations at the annual World of Concrete convention in Las Vegas. The vast array of asphalt pavers, excavators and compactors combined North American power with European styling. The question is: will they be put to use?

US roads are in disrepair. The American Society of Civil Engineers (ASCE) has given the country’s road system a grade D in its most recent report on infrastructure. Fixing the roads promises to be expensive. Maintenance is projected to cost between $101bn (€88.8bn) and $135bn annually between now and 2028, ASCE says. The National Surface Transportation Infrastructure Financing Commission estimates that to improve the highways, the figure should be $165bn. Trip, a private non-profit research think-tank, estimates that clearing the backlog of repairs to roads, highways and bridges would cost $740bn.

Capital spending on US roads is already lagging far behind those requirements, ASCE says, with federal, state and local capital investment amounting to just $91bn annually. Funding comes from the Highway Trust Fund, which receives capital from gas taxes. Until December 2015, the gas tax had not been raised since 1993, and for most of the past decade US Congress passed stopgap measures to keep the fund solvent. A divided Congress finally managed to pass the Fixing America’s Surface Transportation (FAST) Act, providing $305bn for transportation infrastructure over the next five years.

That funding “falls far short of the level needed to improve conditions and meet the nation’s mobility needs and fails to deliver a sustainable, long-term source of revenue for the federal Highway Trust Fund”, according to Trip’s analysis of the act.

The funding gap presents an opportunity for private capital. Major global pension investors have recently acquired some of the premier roadway assets in the US, primarily in the Midwest. Despite its lingering rustbelt image, the Midwest remains critical in the logistics chain from Asian factories to business and consumer markets on the east coast. 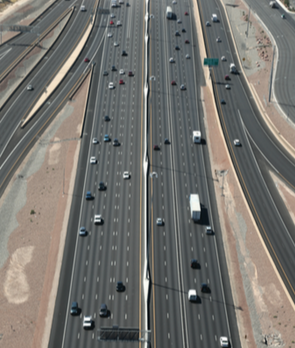 Roads are “quite significant assets”, says Michael Kulper, executive director, infrastructure, at IFM Investors, the US$43bn Australian infrastructure investment manager, owned by pension funds. Last year IFM acquired the Indiana Toll Road (ITR) – one of the crown jewels of the US transport network – for US$5.73bn as 57% equity and 43% debt.

Kulper says the value of toll roads stems from three factors: the length of the concession to operate the road, the structure of the tolling arrangements, and the reliability of traffic volume projections. The ITR came up positive on all three factors, he says.

The contract granted to operator ITR Concession Company has 66 years remaining on the original 75-year term granted to the previous owner when the State of Indiana first leased the road in 2006. IFM has the exclusive right to collect toll revenues from road users and to raise toll rates. And the operating history of the road dates to 1956, providing a foundation for traffic volume history and projections rarely found in the sector.

The ITR is also a strategically important link in the US distribution network. Between one-quarter and one-third of all freight shipments in the US move through Chicago, says Kulper. The great majority of that freight is moving from east to west-coast markets, a trade flow reflected in Chicago’s import volume. CBRE Research data indicate that Chicago’s import volume is nearly four times as large as its export volume, by far the largest differential of the top 10 freight-handling cities in the US, where imports and exports are about equal.

The ITR sits astride all that economic activity, providing a 157-mile link between Chicago-area warehouses and the Ohio Turnpike that feeds into the highway system to the east coast. “The availability of the ITR represented a rare opportunity to acquire a stable asset in a premier location,” says Kulper. “It forms the backbone of the freight system in the United States.”

The opportunity was not lost on Australian superannuation fund Cbus. With significant traffic history, “you’re really able to understand the economics”, says Grant Harrison, investment manager of private markets at Cbus, the super fund for the construction and building industry. In addition to its stake in the ITR through the IFM fund, Cbus also made a US$140m co-investment in the ITR. That enabled Cbus to fine-tune its exposure to US economic growth by increasing its stake in the asset. “We saw it as a very strategic asset in the broader US national transportation network,” he adds. “The ITR carries a significant amount of commercial traffic, so it’s not just competing for time-starved commuters.”

Cbus did a deep dive into the US highway network and the role of toll roads before committing the additional capital to the ITR. “We wanted to understand the relative pricing on the competing roads, the elasticity of demand and how traffic has responded to economic conditions,” Harrison says. “When we looked at the competing routes to the ITR, we found they were less direct, less safe and less well-maintained.”

One of the main reasons there is not more private financing of roads in the US is a public perception that private ownership diverts public funds away from the general welfare and into the coffers of capital owners. But recent analysis of the ITR by The Reason Foundation found that the lease enabled Indiana to invest billions in transportation infrastructure during a major recession.

The US$3.85bn lump-sum payment to the state for the original toll road concession in 2006 “almost totally shifted” the financial risk of operating the road from Indiana taxpayers to the private ITRCC, the study found, while also allowing the state to pay off its debt related to the road, invest nearly US$400m in local roads and infrastructure, and fund a US$500m trust fund to pay for repairs and maintenance.

The study explains that the ITR contract did not simply move revenues forward for the benefit of private investors. The ITR had run persistent deficits and had a negative net present value under state management, so the US$3.85bn lump sum the state received was previously unavailable for either current or future state spending of any kind.

The Tax Foundation, a non-profit organisation that monitors public infrastructure spending, says that “given the overwhelming benefits that Indiana has reaped from leasing its toll road to a private operator, it makes sense for policymakers in jurisdictions with public sector toll roads to explore the potential value of leasing those assets as they develop strategies for closing a long-term mismatch between transportation needs and available funding.”

Despite the boom in sales of road-construction equipment and clear interest from institutions in financing US roads, erratic funding means many miles of road remain in poor condition. The American Automobile Association says damage to cars from hitting potholes cost US drivers $15bn in vehicle repairs over the past five years.

Ford Motor Company is preparing to build cars that can endure rougher roads. At its Lommel proving ground in Belgium, the company has laid 50 miles of test tracks, presenting test drivers with more than 100 challenging surfaces modelled on real terrain in 25 countries.

Even if US roads cannot be repaired soon, Ford is making sure its cars are as stylish as the machines that are repaving US highways.

Once toll roads are in place, going back can be expensive. In the State of Texas, more than $21bn (€18.4bn) in debt issued by state and local tolling agencies is connected to toll roads, according to a preliminary analysis by the Texas Department of Transportation. With interest and other costs, the agency says, borrowers will pay $38bn to retire that debt over the next three decades.

Texas has been growing rapidly for years, attracting companies from the US and abroad. This has resulted in traffic congestion. Toll roads have helped to ease the strain, in large part by building managed lanes that charge higher rates for travel during peak hours. But the recent bankruptcy filing by Cintra, the company that operates the SH 130 toll road near Austin and home of Cintra’s US headquarters, has galvanised criticism of toll roads and encouraged support for the publicly-funded road building that created the free Interstate highway system in the middle of the 20th century.

The central issue is that toll roads must deliver value. The SH 130 Concession Company, a partnership between Spain-based Cintra and San Antonio-based Zachry American Infrastructure, opened the 41-mile southern portion of a 91-mile state highway in October 2012. The $1.3bn deal called for the company to build and operate its section of the road for 50 years in exchange for a portion of the toll revenue, but the project quickly ran into trouble as traffic volume fell short of projections, leading Moody’s Investors Service to downgrade the company’s debt a year after the toll road opened. While state money was not used to build the road, the situation highlights the risk of ‘greenfield’ roads that do not have proven usage or clear demand, despite being located in high-growth states.

As the SH 130 concession company struggles, the Texas Department of Transportation is trying to make best use of the road by lowering tolls to divert traffic from the nearby US Interstate highway to reduce congestion on the free highway; the toll reduction highlights the importance of conducting the type of analysis Cbus performed to evaluate the threat that competing routes pose to toll roads.

Cintra has been involved in some of the most controversial US road deals, including the one concerning the Chicago Skyway, a toll road linking the free US Interstate highway through Chicago and the Indiana Toll Road (ITR).

Late in 2015, a consortium of Canadian pension funds bought the operator of the Skyway for US$2.8bn in a transaction in which each injected equity of US$512m, or about half the deal value. Skyway Concession Company was created in 2005 when Cintra Infraestructuras, a subsidiary of Spain’s Ferrovial, and Australia’s Macquarie Group, acquired the toll road from the City of Chicago for US$1.83bn under a contract giving the consortium operating rights for 99 years.

IFM acquired the ITR in the course of the bankruptcy proceeding that ensued when the joint venture between Cintra and Australia’s Macquarie Atlas Roads – which had secured the 2006 lease of the toll road from the State of Indiana – succumbed to a debt-laden, high-rate structure.

The contagion, so to speak, spread during March, as transportation officials from the state of North Carolina huddled with their Texan counterparts to discuss Cintra’s bankruptcy filing in connection with its Texas toll road.

Cintra has an agreement with North Carolina to construct and operate a private toll lane alongside conventional lanes of Interstate 77 – the US highway through the state – with a 50-year revenue sharing agreement.

Despite intense opposition from advocacy group Widen I-77, construction of the North Carolina toll lane is under way.