Infrastructure secondaries are set to grow in line with the expanding primary market. Florence Chong reports

Over the next four years, the market for infrastructure secondaries could exceed US$15bn (€13.2bn) – more than twice what it was last year. Growth in the secondary market reflects the proliferation and upsizing of primary infrastructure funds.

Interest in the primary funds has spilt over into infrastructure secondary funds.

Demand for secondaries has been coming from pension funds, sovereign wealth funds and insurance companies, and more recently from Asia-Pacific.

Various managers are raising capital. They include UK-based Stafford Capital Partners, which has a target of €750m for its fourth infrastructure secondaries fund. At the time of writing, it had secured commitments for more than €500m.

Pantheon is also marketing its fourth flagship infrastructure fund, which has a focus on secondaries, having raised £400m (€480m) on the London Stock Exchange in November 2021.

Kathryn Leaf, global head of real assets at Pantheon, declines to discuss current fundraising, but she says the firm’s third flagship fund raised US$2.2bn in 2018, and was significantly oversubscribed.

Leaf agrees with her peers that there has been a lot of fundraising in the sector, but says deal volume has grown even faster. “Our team is seeing many high-quality deal opportunities that significantly outmatch the capital base,” she says.

Last year, Ardian forecast the market to grow by about US$15bn by 2025.

But Mark Benedetti, co-head of Ardian North America, says 2021 modelling is being outpaced by market growth – that the actual size of the market by 2025 will be bigger.

“If you go back to 2005 or 2006, the overall secondary market was a fraction of what it is today – a US$130bn-a-year volume,” he says. “Infrastructure accounts for just (a tiny) fraction of this. For me, the long-term potential of the market is enormous.”

Benedetti says that infrastructure is different from private equity because of longer holding periods; when a private-equity fund is liquidated after six or seven years there would not be much net asset value (NAV) left to trade. “In infrastructure, as the primary fund matures, the pool of NAV that you can buy will continue to increase substantially,” he says. 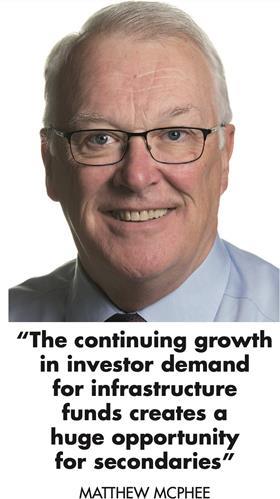 Matthew McPhee, partner at Stafford Capital Partners, says: “As a rule of thumb, the size of the limited partner-led [LP] infrastructure secondary market is 10% of the primary fundraise market, a lag of five years. Why five years? Most funds have an investment period of around four years, and secondaries buyers want to see a fully committed fund to properly value the assets.”

Based on that, McPhee says, this year the size of the infrastructure secondary market could reach US$9bn. “The continuing growth in investor demand for infrastructure funds creates a huge opportunity for secondaries,” he says. “We saw total secondaries volume of about US$6.5bn in 2021 and can reasonably see the market programmed to reach twice the current opportunity in the next five years.”

Benedetti says deals are getting progressively larger. ‘“When we raised US$500m for our first fund, we thought that would be big enough,” he says. “The volume of deals we did was three times that, and we had to syndicate some deals to our investors.

“Before last year, a big deal was US$500m to US$1bn. Over the summer we signed and closed a $1.5bn transaction. What we like is that it is a multi–fund portfolio of top-quality assets. It is exactly the blueprint of what we want to buy.”

That US$1.5bn deal remains a global record for a portfolio of infrastructure secondaries. “More than 95% of the assets are weighted to the US and Europe, and they range from renewables to transport, utilities and fibre optics,” Benedetti says. “The portfolio was evenly distributed among those sectors and sub-sectors.”

“Thirty years ago, secondaries was a ‘backwater’ of the market. We were behind the scenes providing liquidity to LPs [limited partners] in direct buyout funds. And now we are on the front page as our industry has scaled significantly, and that has attracted new entrants into the market.”

A significant recent change in the secondaries market is the emergence of transactions led by managers or general partners (GPs).

Leaf notes a distinction between LP portfolios and GP-led transactions in terms of the assets for sale. LPs tend to offer diversified portfolios across the key underlying infrastructure sectors. GPs are seeking solutions for specific assets in their funds and so the deals can be much more concentrated from a sector standpoint.

She says that when large LP portfolios come to market there can be a “feeding frenzy”. That can mean reduced scope for buyers “to create alpha on the investment” if more of the upside has to be priced in due to competitive dynamics.

Pantheon sees working on GP-led deals as a very different proposition. Deals are about investing in targeted assets that can have significant value creation remaining and where there is a need for a longer hold window or additional capital to execute the plan.

“There are many factors beyond price to make a deal successful,” Leaf says. “These deals can be more skewed to tailwind sectors such as digital infrastructure, where the growth opportunity can sometimes outstrip the existing LP capital base and time horizon.”

McPhee attributes the spike in GP-led infrastructure transactions to a change in investor sentiment towards private-markets investing. “Institutional investors are more willing to roll their investments from earlier vintages into fund restructurings or continuation vehicles now that they have seen assets perform in line with earlier expectations.”

Stafford Capital’s standout GP-led deal last year was the acquisition of a stake in Terra-Gen, a renewable energy developer, for more than US$100m. McPhee says the manager, Energy Capital Partners (ECP), spun off the asset from its third fund as the vehicle approached the end of its life, and was not in a position to continue to fund the asset’s growth.

Australian manager First Sentier took a 50% stake in Terra-Gen. This set the price for some existing ECP III investors to roll over into a new fund, with Stafford also participating in the transaction.

“This is the good thing about a GP-led transaction; there had been a high level of disclosure,” says McPhee. “The valuation was set by a partial external transaction and we’re comfortable with the risk-adjusted returns and governance.”

McPhee credits growing acceptance of open-ended funds, which he describes as “very much an Australian concept”, for the rise in GP-led transactions. For a long time, he says, the investment community preferred the discipline of a close-ended fund with a 10-year exit strategy. “That is now changing, and we are seeing a lot of LPs happy to roll their capital into continuation vehicles and longer-term structures,” he says.

“They are now more comfortable with open-ended funds. But not all investors are in a position to transfer their investment into the new vehicle. Secondary funds play a useful role in providing liquidity to the those investors and help make the transaction happen.”

Ardian, however, is one player that has not departed from the original thesis of offering liquidity to LPs, or investors. Benedetti says 85% of all Ardian’s transactions are on LP portfolios, and just 15% are GP-led deals.

“We value the diversity of having a broad base of investments,” he says. “Our last fund invested in more than 20 underlying funds, and no one asset accounts for more than 3% of our portfolio. We were able to generate strong high-teen returns. Our assets outperform the underlying infrastructure market.”

Ardian has firsthand experience of the demand for a secondary market, which investors increasingly use to manage their portfolios of private assets. “Not only is the pool growing, the percentage of the pool that trades is also growing,” says Benedetti.

“We were getting calls from people every month wanting to sell secondaries. We couldn’t put them into our private-equity secondary fund, and that is when we launched our first infrastructure secondary fund.”

As Benedetti sees it, GP-led deals do not necessarily offer the best investments. Typically, GPs offer three or four assets or a single asset to the secondary market. “We do not do single-asset deals,” he says. “We like a portfolio of at least three or four assets.”