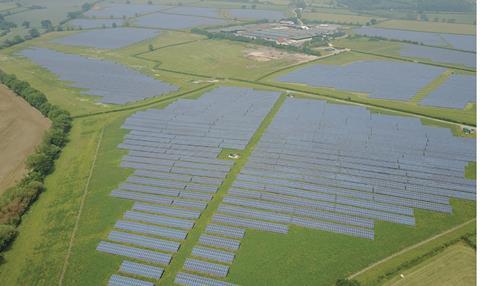 In recent years, the UK has experienced a proliferation of renewable infrastructure fund listings, all looking to capitalise on the shift from fossil fuels to sustainable sources of energy – and investor interest in the story. Dutch merchant bank Kempen puts the number of renewable infrastructure funds listed in the UK at over 12, with a combined market capitalisation of more than €10bn.

The funds are, for now, more popular among UK investors, including pension funds and private banks, as continental Europe is still getting familiar with the sector, says Charles Maynadier, an infrastructure research analyst at Kempen.

Maynadier says the outlook is bright for the UK listed renewable infrastructure fund sector, “driven by the strong growth in renewable capacity additions in Europe”.

He adds: “The theme, resilience, modest fees and rich dividend yields provide attractive features for investors looking to get exposure to the renewables megatrend in a relatively low-risk manner.”

According to Maynadier, the funds generally pursue a strict and well-defined strategy. These strategies have defined parameters like the asset type; the target location; merchant risk, leverage, fees, dividend payments and so on.

They typically pursue a buy-and-hold strategy and take on limited construction risk when it comes to investing. Maynadier explains that assets are often purchased through long-term partnerships with utilities providers, developers or investment managers, and are financed with equity, combined with short-term revolving credit facilities.

The UK renewable fund infrastructure fund sector recorded a wave of first listings in 2013 and 2014, and there has been an acceleration in recent years, with at least seven new funds listed since 2018, including two storage funds.

“While the size of capital raised at initial public offering did not seem to change significantly over time, the strategies have become more diverse, with strategies focused on more technologies and more geographies. More recently, some funds were listed with a focus on new technologies such as battery and storage or energy efficiency,” Maynadier says.

He says it is also worth noting that the majority of older funds that were initially focused on single technologies and countries have also broadened their investment universe.

Similarly, Paul Flood, a multi-asset portfolio manager at Newton Investment Management, believes the sector has evolved significantly over the past decade. He says that, prior to the 2008 financial crisis, the alternatives sector was dominated by hedge funds and private equity funds.

“Investments trusts have really democratised private markets, by allowing individuals to purchase shares in some of these more illiquid markets, and providing investors with daily liquidity through their listed structures, much like real estate investment trusts did for property,” he says.

“Today investors can own a stake in a wind or solar farm that costs tens of millions of pounds to construct, giving investors access to stable, repeatable cash flows that are paid out in dividends.”

They offer diversification benefits to what would have historically been an equity/bond-dominated investment portfolio, without affecting the manager’s daily operations when you want to add or decrease your holding, he says.

“Since the early days of traditional PFI [private-finance initiative] projects we have seen various new strategies emerge, including renewable energy assets, digital infrastructure assets, energy efficiency and battery storage. It is not just UK-oriented either, with many of the funds searching globally for the best opportunities. London just happens to be a leading market for the investment-trust structure to list with an investor base that understands the structures well and is looking to diversify portfolio risks. Given the lack of yield in European bond markets, I do find it odd that there is not more demand for these investment strategies in Europe.”

Flood also agrees that the outlook for the UK listed renewable infrastructure sector looks promising, given the “high discount rates being used to calculate the net asset values in the sector”.

Flood believes the pandemic had a significant impact on the short-term power price, but it also resulted in longer-term forecasts also being brought down. “However, the short-term power prices in the UK have rebounded with the reopening of the economy and a higher carbon price to encourage production of renewable energy, and has now been at a decade-long high for a prolonged period, and is expected to remain high for the coming years. We believe this is an opportunity being missed by investors focused on last year’s story.”

He says that, as governments look to decarbonise economies, “we will need solutions to help with the vast amount of renewables being added to the electricity grid. We are seeing a lot more opportunities for battery-storage projects to help renewables offer a more stable production of renewable energy as battery costs come down.”

USF is the only UK-listed investment company that invests exclusively in utility-scale solar in the US, which is the world’s largest investable solar market. “Unlike similar UK funds, which tend to earn income on a merchant basis – ie, selling power at the prevailing electricity price – we have long-term power-purchase agreements in place which commit to a fixed power price for an average of 15 years,” says Whitney Voute, head of investor relations.

Voute says 2021 is on track to be the strongest year for renewable energy deployment in the US, surpassing 2020’s record.

Having raised $200m (€168m) at initial public offering (IPO), the fund became fully invested in operational solar plants by December 2020. A further $132m was raised in May this year to refinance debt facilities on certain projects. Voute says the fund pays a 5.5% yield via quarterly dividends and is on track for 2021.

“The trend and movement towards sustainable energy sources in the US is bolstered by US President Joe Biden’s demand for a 50-52% reduction in net greenhouse gas pollution by 2030,” she says.

Many of the companies develop, own and/or operate physical assets, such as wind farms, solar arrays and hydroelectric power stations with long-dated contracts, and other related infrastructure like batteries.

William Argent, the fund’s investment adviser, says: “This would contrast significantly with other clean-energy strategies that focus on investing in companies that are perhaps manufacturers/industrials involved in the renewable-energy supply chain – supplying components or technology to be incorporated into a wind turbine, for example, or involved in developing hydrogen fuel-cell technology or electric vehicles.”

“We believe the strategy can continue to provide a reliable source of attractive income for investors, and this view is underpinned by the long-dated, contracted assets,” Argent says.

“The transition to a low-carbon/net-zero economy will require significant global investment in renewable-energy-generation capacity, energy-efficiency measures and evolution of the power grid. This dynamic is likely to prove a multi-decade structural-growth trend and should provide a healthy pipeline of opportunities for the companies in which we invest.”

GRID, with 425MW of operational assets, is the UK’s largest listed battery storage fund, with about 30% market share.

The fund has a further 850MW in development due to be completed in 2022 and early 2023, according to Ben Guest, managing director of new energy at Gresham House and manager of GRID.

“Gresham House believes that the UK will require some 10GW of battery storage by 2023 as, increasingly, renewables come online and penetration tips beyond 40%, with the expected substantial deployment of offshore wind in the mid 2020s,” says Guest. “Storage is, of course, essential to balance the supply-demand mismatches caused by renewable power’s intermittency.”

Guest points out that some other listed funds are experimenting with battery storage in very early stages, in some cases changing investment policy to enable investment, and often investing alongside a much broader portfolios.

“The market is highly specialised, where expertise and experience are a clear differentiator for investors and counterparties in the energy market,” he says.

GRID has raised approximately £458m since listing. Guest says the fund yields 7% with a quarterly dividend, and is targeting 15% total return on a leveraged basis. “Over the past 12 months, the NAV return has been 16.8%.”

The current social, economic and political environment, in which energy generation is moving away from large fossil-based systems is highly conducive to sustainable energy infrastructure investment, says CEO Anthony Catachanas.

“Middle-market industry participants will play a prominent role in the world’s energy transition,” he says. “This shift is calling for real-asset funds to play a role in enabling this greater participation of the middle-market players.

“The whole process of directing funds to middle-market players results in investment opportunities being greater than in other periods, where energy investment activities were concentrated on governments and very large corporates.

“As such, having a strategy that does not need to exit is attractive to middle-market developers around the world, allowing us the ability to create long-term partnerships with these groups and access projects that will facilitate the energy transition on an ongoing basis.”

In less than six months since listing, the fund has deployed 40% of its IPO proceeds in projects in the US and Brazil. The objective is to grow the fund to at least £2bn over the next five years, Catachanas says.

According to Chris Gaydon, investment director at Octopus Renewables Infrastructure Trust, the fund is highly diversified and differentiated from its peers in a number of ways.

“It has wide geographical reach, able to invest across the UK, Europe and Australia, and is able to invest in opportunities at the development and construction stages, creating value as these assets are de-risked,” he says.

“ORIT is also a multi-technology fund able to invest in onshore wind, solar and other renewable technologies, which may include batteries, offshore wind and hydro, for example. We believe that the diversification benefits of investing in different geographies, technologies and stages of asset life all add to investor value.”

At the company’s first set of annual results since IPO, announced last December, the fund achieved NAV total return of 2.4% over the period since IPO and total shareholder return of 15.9%. ORIT also achieved its target dividend of 3.18p per share for the period, reconfirming a 5p dividend target for the whole of 2021.

The fund fully invested the proceeds from IPO across five acquisitions, with diversification across 24 assets, four countries, onshore wind and solar PV, and operational and construction assets. It has raised £150m and is looking to continue deploying the proceeds into ORIT’s £1.3bn pipeline, Gaydon says.

There are several characteristics that make AERIF unique among its peer group, according to Michael Anderson, senior manager partnerships and portfolio management at Aquila Capital, the investment adviser to AERIF.

These features include its offering access to continental Europe exclusively (the UK is excluded) and being euro-denominated.

Anderson says AERIF has shown continued and disciplined capital deployment building a diversified portfolio across European countries and across technologies.

“AERIF listed with no initial assets and since that time has amassed a portfolio of 10 projects,” Anderson says. These projects comprise 32 assets in total and a total generation capacity of 332MW.

“Capital increases were on track with articulated growth strategy at IPO,” he adds. “The European Green Deal and various policy initiatives… continue to provide fertile backdrop.”