The number of independently owned telecom towers is expected to grow. Fraser Hughes looks at the opportunity in the public markets

Telecom towers are an increasingly important investment opportunity as they are essential to everyday communications across the world. Operators need to develop larger, denser and more efficient networks to handle the rising demand for mobile services as their customers continue to gain access to advanced handsets and high-bandwidth applications.

This has led to a growing number of independent companies owning telecom tower infrastructure, as they can offer shared networks that can cut costs for the large mobile operators. The owners of the towers are paid rents by the operators, under long-term, typically non-cancellable contracts with annual escalators. Owning masts has become an increasingly attractive investment for private and public investors keen to put capital to work in infrastructure-based assets with consistently compounding cash flows.

Owning towers is not strategic for the carriers as they are non-performing, cost-centre assets with a carrier that can be readily monetised and turned into significant cash generating assets in the hands of an independent tower company with no change in functionality for the carrier selling the towers. In addition, the present value economics of owning versus leasing favours leasing. Plus, zoning laws make it impractical for carriers to each have separate towers for every one of their sites. Shared infrastructure remains the clear-cut most efficient way to deploy today’s networks, from both a cost and technological perspective.

The scale of independent tower companies allows them to negotiate with their customers and to offer nationwide portfolios to facilitate the density requirements of modern wireless networks.

Considering it is a relatively capital-intensive business initially, having significant financial assets is important as portfolios are constructed and acquired.

Basic selling, general and administrative is not insignificant, but scalable with revenue growth, given minimal incremental SG&A requirements associated with adding towers to an existing operation.

In a broader sense, telecom tower companies are mission-critical, as a high percentage of mobile traffic goes through their masts. Network quality is a major factor driving customer churn for wireless carriers and, consequently, it remains a key factor in carrier marketing and will continue to be extremely important in an environment where delivering bandwidth-intensive content is a necessity to attract and retain customers.

TowerXchange tracks 249 tower infrastructure companies that collectively are estimated to own just under 70% of the world’s 4.1m investible towers and rooftops. Table 1 shows the top 15 independent companies which account for approximately 2.2m towers. State-run China Tower is the largest owner with 1.7m towers in China. It has been reported that the company could be valued up to US$50bn if listed. Listed companies are heavily represented in the table, with US-listed American Tower, Crown Castle and SBA Communications second, fifth and ninth, respectively. Other listed companies come from Europe, India and Central America.

The tower business is very much a global affair, and there are a number of different regions with active independent tower companies. For example, American Tower, Crown Castle and SBA Communications have been around for 20 years or more in the well-established US market. These three tower specialists qualify under US REIT legislation, with SBA the latest to convert this year.

Meanwhile, the UK market has three main private independent players: Arqiva, Infrastructure Group and Cellnex, which collectively own about 35,000 towers. According to EY, only 30% of UK towers are independently owned, which could lead to potential growth. For this to happen, however, industry structure and the regulatory environment would probably need to improve.

In continental Europe, the sector is slowly forming, with the recent initial public offering of Cellnex, INWIT, and Rai Way as mobile operators look to cut costs and raise cash. EI Towers has been around since 2004. However, independently owned towers still only account for less than 20% of the European total according to EY, including Cellnex’s recent expansion into Switzerland with its purchase of approximately 2,200 towers from Swiss Towers.

Parin Shah, who works in European telecoms research at Bank of America Merrill Lynch, says: “The key question for European tower operators is whether they can deliver levels of growth on a par with other territories, while still relying largely on CPI-linked contracts.

“Can the decommissioning model start to significantly augment growth in markets where the organic growth opportunity may not be as attractive as the US and elsewhere? Can newly liberated operator towers and derived proceeds drive incremental growth for the market? And perhaps delivering this growth leads to international players fundamentally reassessing the attractiveness of European businesses.” 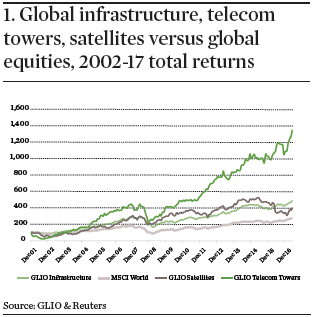 Finally, China, India and Indonesia are well represented in the league table, with multiple independent tower companies operating in the region.

Understanding the strong secular backdrop of growth in global mobile data is the first step to understanding the sector and why global institutional investors should seriously consider it. This growth, as highlighted in table 2, is huge across all regions in the world. In virtually every industry, mobility is an emerging, and potentially disruptive trend. The number of connected devices per capita, the average connection speed, video usage and mobile traffic are all estimated to grow at startling rates. Just looking at global connection speeds, which have a compound annual growth rate (CAGR) of 24%, while mobile traffic per month has risen from 977MB to 5.7GB (42% CAGR). 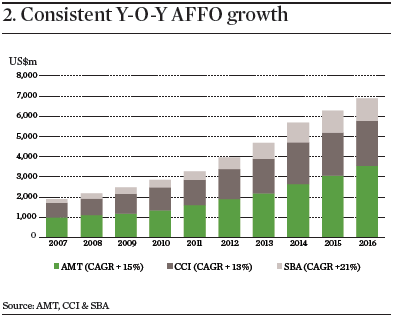 To help address the massive network demand growth, wireless carriers and other customers within the mobile ecosystem are expected to use incremental space on telecom towers while also growing the number of sites they have within their respective networks. Part of this entails the deployment of new ‘spectrum’ (frequency bandwidth) and the optimisation of existing spectrum bands. Empirical data shows carriers can more efficiently – both in terms of time and capital – achieve this by layering it on top of their existing locations (masts), leading to incremental revenue and cash flow for the tower companies. Existing sites are designed around these spectrum bands, serve the existing customer base, include fibre/microwave backhaul investments and have requisite power and security in place. Further, as mobile data usage grows, networks must become denser, so carriers are also expected to place equipment on additional masts over time where they may not already have equipment installed. 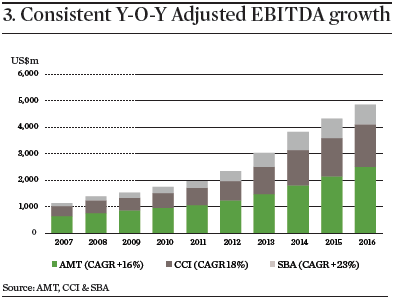 Importantly, the physics of signal propagation underlies the demand for towers, both today and in the future, given the need for a high point to propagate signal over various spectrum bands in the vast majority of topographies. Unless these properties of physics are fundamentally altered (currently, there are no indications of this), more equipment must be located on towers in the future to meet growing network usage, over and above the available incremental spectrum, and spectral efficiency improvements. The bottom line is that industry projections suggest that by 2021 there will be nearly 12bn mobile connected devices globally, which is approximately 1.5 device per capita – an immense statistic.

Telecom towers (which comprise the majority of the GLIO Telecom & Satellites sector) represent the fifth-largest sector in the GLIO infrastructure coverage and are fundamental to any infrastructure allocation.

Manoj Patel, managing director at Deutsche Asset Management, says: “We believe telecom towers play a primary role in a broader allocation to global infrastructure. Wireless communications have developed into integral part of the essential framework of the global economy, and this will become even more vital going forward as future technologies emerge and the listed tower companies are ideally placed to take advantage of this.” 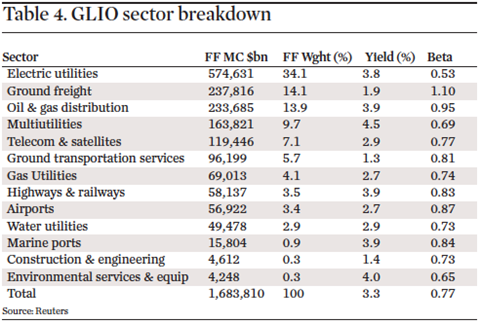 The long-term track record of the large US-based tower companies has been more than impressive (figure 1 and table 3). Even 10-year annualised total returns, which include time periods around the global financial crisis, range between 12% and 16% per annum. The periods around the financial crisis are truly phenomenal, as tower companies tended to materially outperform most other sectors (figure 1). Underpinning the growth of share prices, are the underlying performance metrics of adjusted EBITDA and adjusted funds from operations. Figures 2 and 3 show a consistent, stable and steady growth across these two metrics for the three major US tower companies.

When building a sensible allocation to the sector, investors will also look for a proven track record in terms of shareholder return performance and management expertise. The access to the size, expertise, diversification and global network exposure offered by the listed telecom companies is unparalleled.

In simple terms, it would take decades and hundreds of billions of dollars to replicate the network that they currently offer investors. Transparency, liquidity, yield and cost-efficiency bolster the case.

Fraser Hughes is CEO of GLIO