The UK closed-ended listed infrastructure investment company sector is still relatively new. Currently there are 11 companies with equity investments in a range of private infrastructure assets, from social infrastructure like schools and hospitals to renewable energy such as solar parks and wind farms, with a total market capitalisation of just under £11bn (€12.7bn).

Assets are held mainly in the UK, continental Europe, North America and Australia. The closed-ended structure is more suitable for investment in illiquid assets, as the corporate vehicle is not forced into asset sales or purchases determined by investment flows in, or out, of the vehicle as with open-ended funds.

We have calculated the market capitalisation-weighted performance of 11 UK listed infrastructure companies and called it the GLIO UK Infrastructure index (GLIO UKI)*. At an individual stock level, figure 1 highlights the 11 individual investment companies, detailing year of listing, full market capitalisation, current yield, and annualised compound performance over a number of investment horizons, where available. The top six companies are constituents of the FTSE Mid 250 index.

Figure 2 illustrates the 10-year performance of the GLIO UKI versus the FTSE equity indices. The GLIO UKI outperforms all the FTSE equity indices for most of the time scale (with the exception of the FTSE250 for a few months in 2014). Figure 3 shows that the annualised performance of the GLIO UKI looks very attractive over three, five, 7.5 and 10-year annualised investment horizons, compared with the FTSE 100, and the FTSE UK Financials (we explain later why we use FTSE UK Financials). The GLIO UKI outperforms both indices over all investment horizons. The GLIO UKI also beats the FTSE 250 over the shorter and longer term.

The low short-term interest rates prevalent since 2009 and the decline in bond yields have meant investors have looked to higher-yielding sectors like real estate and infrastructure to bolster income. Currently the GLIO UKI offers a market cap-weighted average yield of 4.5%. This compares with 3.8% for the FTSE 100, 2.8% for the FTSE 250 and 4% for the FTSE UK Financials.

In terms of diversification of assets, these 11 companies have stakes in about 500 different underlying assets, across a variety of sub-sectors and locations. Investments are located almost exclusively in the developed markets of the UK, continental Europe, US, Canada and Australia. The sub-sectors range from social infrastructure, such as schools, healthcare, justice and emergency services, social-housing and government buildings, to transportation, solar parks and wind farms. 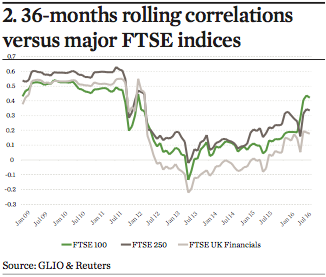 The vast majority of the investments are long-term contracts with the public sector, or with high-quality private-sector corporates, to operate a specific asset and/or generate power. With very predictable costs, which can also be locked in via largely matching subcontracts, this structure provides the right conditions to achieve stable income. In addition, many assets will be protected against inflation, either explicitly, such as the case with most PFI/PPP concessions, or indirectly through the inflationary link built into power prices.

Finally, all of these benefits can easily be accessed by institutional investors through the liquidity of the investment company shares, which are all traded on the London Stock Exchange, coupled with the advantage of the transparency of the public markets. 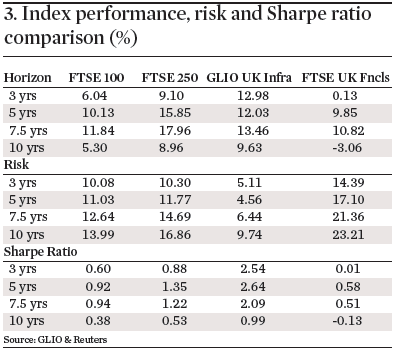 The majority of the GLIO UKI investment companies should be able to take advantage of EIOPA recommendations to the European Commission on Solvency II capital requirements. In practice this would mean that the current risk charge of 39% for insurers would be reduced to 30% for their investments in the majority of the GLIO UKI companies. Of the 11 companies, analysis shows that eight would most likely qualify for the lower 30%, with two classified as ‘maybes’ and one requiring further investigation as it holds assets outside of the OECD or EEA, a key requirement of Article 164a.

Looking ahead, this might be the tipping point for insurers to invest more significantly in the sector. 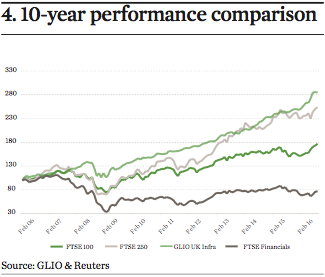 Many of the UK infrastructure investment companies are classified under the financials sector of the global classification systems governed by FTSE and MSCI. This means that the companies are being bundled with global banks and insurance companies such as HSBC, Prudential, Lloyds Bank and Aviva.

Figures 2, 3, and 4 show that the companies within the GLIO UKI offer completely different investment characteristics. If you compare the 36-month correlations and the medium to long-term total return performance versus UK financials, the difference is huge. Perhaps it is time index providers looked at this issue.

The shareholder base of the GLIO UKI companies is predominately UK-based. In conversations with the UK infrastructure investment companies, this could be more than 90% in many cases. As the sector continues to develop and mature, and more global investors understand the opportunities the sector offers, this figure should lower as non-UK investors start making larger investments.

Of course, there are risks to consider when investing in infrastructure, such as political and regulatory risks, exposure to development (greenfield investment), counterparty risk, and, in the case of the renewables funds, weather and power-price risks.

Of course, the benefits of liquidity mean investors can mitigate these negative shocks effectively, if unforeseen situations develop.

Furthermore, the redemption issues which caused major headaches for open-ended UK property funds this year will not be a distraction for the UK infrastructure investment companies due to their closed-ended structure.

Robin Hubbard is director of investor relations at InfraRed Capital Partners, and Fraser Hughes is CEO of GLIO

*The GLIO UK Infrastructure index has been calculated for the purposes for this article only, using monthly Reuters total returns for the individual stocks, and weighted by full market capitalisation