Infrastructure: Water... And not a drop to drink

Investors need to consider investing in emerging markets if they are serious about infrastructure, writes Christopher O’Dea

Success in the infrastructure sector increasingly depends on the capacity for local political systems and government agencies to handle the regulatory, legal and public outreach efforts required to get projects off the ground and keep them running. At the same time, the local nature of infrastructure projects encourages institutional investors to finance initiatives in their own back yards, exerting a built-in restraint on foreign financial adventures – and sparking a trend towards direct investing to increase control over underlying assets, and hopefully, optimise long-term cash flows.

“Investing doesn’t get any more local than infrastructure,” says Bernard McNamara, executive director in Global Real Assets at JP Morgan Asset Management. “Investors get exposure to the trajectory of a country and regional story, and local GDP and economic factors,” he adds. The attraction for pension funds, of course, is that emerging market infrastructure adds diversification and return potential to a portfolio, McNamara says. By investing “through private markets, instead of public listed markets, investors can achieve pure-play diversification with low correlation”.

Infrastructure investing requires the ability to understand and influence numerous sectoral and project-specific risks that have an impact on the success of each transaction. Increasingly, it is all about the state of the state. “The state has to function relatively well for these projects to move ahead,” says Maarten-Jan Bakkum, senior strategist for emerging markets in the Multi-Asset boutique of ING Investment Management. For example, Bakkum says, recent economic and regulatory reforms have turned Mexico into an overlooked positive story among emerging markets. But “the big question has always been, and will always be, the efficiency of the state. They don’t move easily in Mexico.”

Other bright spots in the emerging markets are India and Indonesia, where new governments have been taking steps to address chronic underinvestment in most infrastructure sub-sectors. Indian prime minister Modi has moved to modernise property and taxation laws, among other things, that slowed the private sector’s ability to acquire land needed for most infrastructure projects. “[The government has] made the moves to allow these projects to go ahead, and India seems to moving in the right direction,” Bakkum says. 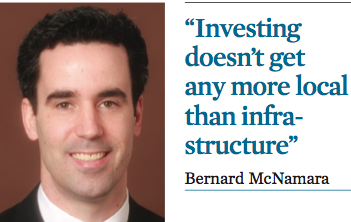 While emerging economies share some characteristics, there are significant country-level differences. “Within the two biggest economies, India and China, multiple development phases are simultaneously unfolding,” according to a JP Morgan white paper on Asian infrastructure. India, for example, has a sizable post-industrial sector providing global IT and services, while China has a relatively well-developed infrastructure base concentrated in its coastal manufacturing hubs. But in both nations, JP Morgan notes, these advanced economies exist alongside rural provinces still in the early stages of industrialisation and urbanisation.

Despite the enormous need in Asia, most investors are still targeting Europe and North America, says Preqin, with 49% and 35% of institutions ranking those regions as their top priorities, respectively, compared with just 15% preferring Asian investments.

This reflects a broader financing gap, McKinsey says. “Even if institutional investors were to achieve their target allocation in infrastructure, it would mean additional funding of only around $2.5trn by 2030,” according to McKinsey. The gap arises because, while there’s no shortage of projects being proposed, “when investors are presented with a project, they do not always find it investable,” McKinsey notes.

In fact, Preqin’s March 2015 Infrastructure Spotlight found that although two-thirds of institutional investors plan to increase their allocations to infrastructure over the long term, nearly half are already concerned that there are not enough viable opportunities to absorb private capital ready for deployment this year.

Concern about the composition of the infrastructure opportunity set reflects how the universe of available assets changes over time, says David Cooper, head of European debt investments at IFM Investors. In 2008, there were many operating and pre-construction transactions, while recently there have been a wider variety of deals, but with many having similar credit ratings. In the debt market, for instance, mezzanine debt has been crowded out by senior debt, Cooper adds. The changing inventory can present challenges to running separate mandates, and Cooper says IFM will refuse to take on accounts, or self-select out of the due diligence process, if the team believes the available supply of assets is not sufficient to allow it to manage a mandate in accordance with the objectives of the client. “We are very up-front when we feel we can’t meet an objective,” Cooper says. “Sometimes we get eliminated from the process.”

Owned by 30 Australian pension funds, and managing £27bn at the end of 2014, IFM is establishing a debt investment business focusing on EU private market notes and loans. When he joined from Barclay’s in December 2012, “I was employee number one in the global debt business,” Cooper says. “We rate things ourselves rather than rely on rating agencies, which pushes us away from the debt capital markets,” he says. “We try to capture an illiquidity premium and a complexity premium.”

The expansion into debt investing reflects a broad trend in infrastructure investing – institutions are looking for more diverse ways of gaining access to the asset class. “One of the most significant developments is the growth of investors looking to make direct investments in infrastructure assets rather than committing to pooled funds,” says Preqin.

Infrastructure: Water... And not a drop to drink