The attributes of listed infrastructure make it an attractive investment in a period of rising inflation, say Anish Butani and Gerald Wu

As the global economy emerges from the shadow of COVID-19, demand for infrastructure has surged among bfinance clients. While mostly focused on the unlisted sector, investors are reappraising the claims made in listed’s favour and are more willing to consider listed strategies.

For example, this asset class purports to exhibit greater inflation sensitivity than conventional equities, a key draw at a time when macroeconomic forecasts hint at inflation.

Listed has historically boasted greater resilience during downturns, which can offer an answer to investors’ concerns following a rapid and sustained market rebound.

Proponents like to cite the potential discounts available versus unlisted infrastructure, an argument that was initially popular while illiquid asset valuations soared and which has been bolstered by a stream of profitable ‘take private’ transactions. Higher cash flows, stronger returns and reduced volatility also feature on the tear sheet.

The specific appeal of these characteristics varies, depending on the investor’s allocation approach.

Attraction 1 – performance in market corrections: the ups and downs of 2020 provided analysts with an opportunity to validate expectations that listed infrastructure should limit downside capture during equity slumps – a key attribute of this asset class.

After the March 2020 stockmarket/equities crash and the subsequent recovery, figures showed that listed infrastructure remains compelling versus listed equities, mitigating losses during down-markets while maintaining a high return capture in up-markets.

This pattern reflects the tendency of listed infrastructure to benefit from buoyant macroeconomic conditions and to exhibit its relative resilience as a provider of essential services in down markets. While the 2020 upheaval was unlike any that preceded it in terms of its impact on specific sectors, the overall figures remain compelling.

Today, we note that listed infrastructure assets could still be seen as attractively priced versus unlisted counterparts, based on a range of valuation metrics. On average, 80% of illiquid infrastructure deals were struck above listed multiples; direct investors have paid a valuation premium of 40% when compared with the GLIO index.

However this ‘relative value’ argument has a problem: there is no fundamental reason why valuations on the liquid side must necessarily be drawn into alignment with valuations in private markets, as long as there is sufficient investor appetite and capital available to retain those assets in private hands.

“Listed infrastructure assets could still be seen as attractively priced versus unlisted counterparts, based on a range of valuation metrics”

Attraction 3 – inflation linkage: we fully expect listed infrastructure to be well-positioned, relative to equities, in an environment of rising inflation. Many assets can charge prices that are wholly or partly linked to inflation; revenues are often connected directly or indirectly with inflation through tariff and concession structures with in-built adjustments.

This demonstrates that higher returns have not been sacrificed for the defensive characteristics of infrastructure over the medium term.

A proxy for unlisted infra?
Infrastructure assets, regardless of whether they are listed or unlisted, exhibit the same characteristics and operating cash flows.

In some cases, the assets themselves are exactly the same. This can occur when direct managers take a large shareholding in listed companies (for example, Vienna Airport is partly owned by IFM) or where assets are partly owned by a listed entity and an unlisted investor (the 407 ETR toll road in Canada is owned by Canadian pension funds and the Spanish listed operator Ferrovial). 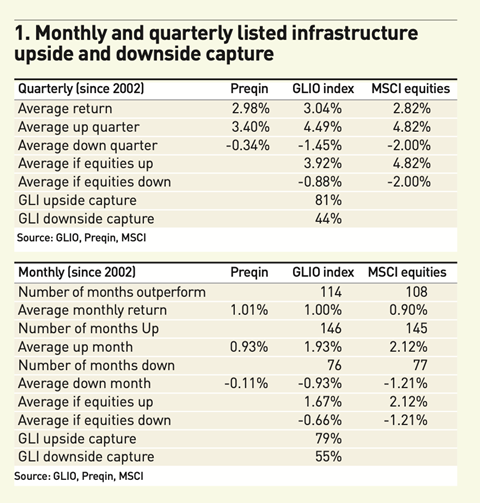 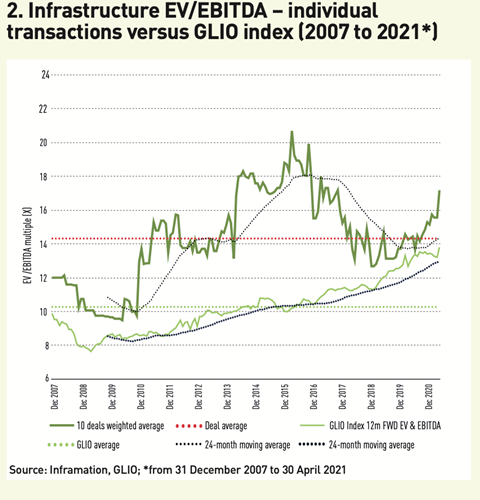 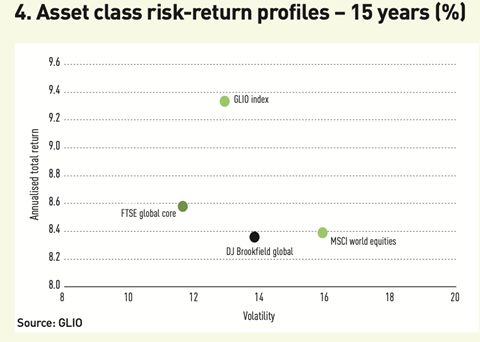 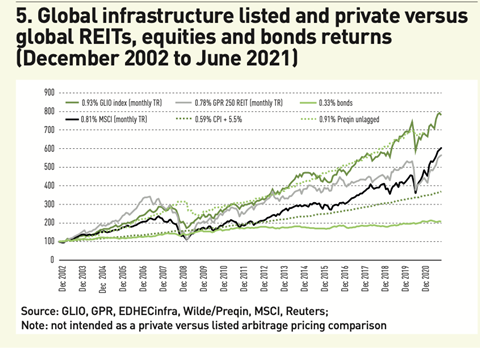 Much is made about the overlap in valuation technique, particularly the common usage of the discounted-cash-flow approach, but many public market investors often adopt multiple-based valuations and shorter-term forecasts, and public markets are more susceptible to shorter-term trends.

Overall, there appears to be a healthy correlation between returns for listed and unlisted infrastructure, as shown in figure 5.

Listed versus private infra
The argument against listed infrastructure, in favour of private markets, most often revolves around the volatility in short-term pricing driven by market-to-market rather than mark-to-model valuation. While that variability in pricing is clear on a monthly, quarterly or even yearly basis, infrastructure investors should, of course, be focused on longer-term outcomes. In fact, private-market investors must be comfortable enough to commit their capital for many years.

Median returns, of course, do not tell the full story. Figure 7 shows the range of returns by quartile over the same vintage years.

For every vintage between 2007 and 2014 – eight years of analysis – private infrastructure funds have displayed a far wider range of potential returns for investors. If a key objective is to achieve stable returns over time, then the narrower range of outcomes suggest that listed infrastructure could be considered as part of an overall infrastructure programme.

The greater range of returns from private infrastructure reflect the nature of private markets performance and, as a result, investors need to pay greater attention to the manager selection process.

Implementation challenges
Once investors make the strategic asset allocation decision to invest in listed infrastructure, crucial implementation decisions follow. There is, for instance, significant dispersion in the performance delivered by different asset managers in this space. Following are some key areas to consider within strategy selection and manager due diligence:

As such, approaches to portfolio construction may vary. The former group, for instance, has greater exposure to the energy and railroad sectors which underpin a large proportion of the investible universe in North America. Some firms are even able to offer different investment options to investors, covering income and balanced (income/growth) outcomes. It is worth noting that we also observe products combining listed infrastructure with REITs in one offering.

The main benchmarks still differ considerably in terms of breadth and sector exposure. Some funds, particularly the more mature ones, benchmark against the S&P listed infrastructure index, which is relatively narrow – having only 75 stocks globally – and skewed towards utilities.

Other funds use the broader Dow Jones Brookfield Global Infrastructure index, which has over 100 stocks and focuses more on a company’s exposure to infrastructure in terms of underlying revenues, or the even larger FTSE index containing about 200 companies worldwide.

“For investors that do decide to implement investments in this sector for the first time, thoughtful deployment within a diverse universe of strategies will be key”

More recently, the GLIO index was established in 2016 in consultation with listed infrastructure managers. The GLIO index is also steered by a specialist advisory committee which helps the index to adapt over time in line with market developments, which is essential to accurately track the asset class.

Each benchmark is unique and has its own limitations. It is crucial to scrutinise the choice of yardstick, validate its rationale in relation to the investment strategy, and appreciate the implications for performance measurement, risk management and compensation.

While most infrastructure managers have beaten their chosen benchmarks in recent years, closer examination reveals that much of the outperformance has been the result of exposure to stocks outside of the chosen benchmark – many funds have off-benchmark exposures of 20-30%, while for others the figure is as high as 60%.

The tailwinds are now firmly in place for rising demand for listed infrastructure and ‘listed real assets’, following a notably subdued 2020.

The asset class’s core tenets remain clear and relevant amid current conditions. For investors that do decide to implement investments in this sector for the first time, thoughtful deployment within a diverse universe of strategies will be key to success. 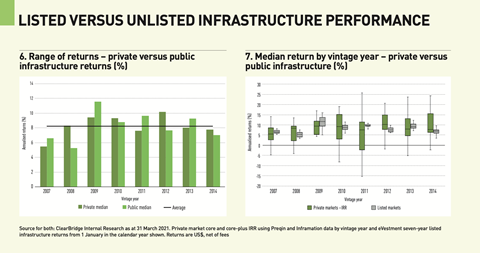