The vast majority of institutional capital allocated to infrastructure has been directed to brownfield assets. But greenfield is starting to figure, writes René Lavanchy 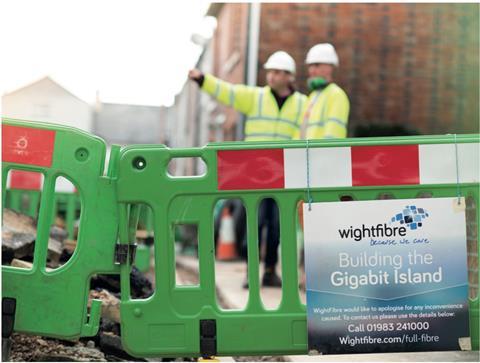 Of all the talking points in infrastructure finance over the past decade, the subject of institutional-investor involvement in the asset class – particularly in greenfield infrastructure investment – is probably the longest-running and most-recurring.

Across the world, governments, multilateral financial institutions, banks and institutional investors have over the past 10 years launched multiple initiatives to tempt institutional capital into greenfield infrastructure, both equity and debt – from the European Union’s Project Bond Initiative to the Dutch pension fund PGGM’s ongoing bidding partnership with contractor BAM.

Insurance companies such as Prudential, Aviva and Allianz have increased allocations to greenfield infrastructure, while independent infrastructure asset managers such as InfraRed and Meridiam have also attracted institutional capital to their greenfield investments.

Greenfield deals in Europe with involvement from the above-mentioned types of investor fell from 43% of all infrastructure deals in 2010 to 30% in 2019. While the number of deals for operational assets with no capital expenditure requirements – secondary-stage deals – more than doubled, from 287 to 668, the number of pure greenfield deals only rose from 252 to 291 (see figure).

To an extent, the figures may reflect constraints in the supply of greenfield infrastructure opportunities. Infrastructure investors across the world have long complained about a lack of bankable projects to invest in. In particular, the delivery of public-private partnerships (PPPs) has been steadily decreasing for over a decade. According to the European PPP Expertise Centre, the number of PPPs closed in Europe and Turkey in 2018 was 39, the lowest figure since 1997, and less than half the number for 2009. The pipeline of renewable energy projects has grown over the same period, but more slowly. Nevertheless, the investment figures point to a continuing lack of appetite from institutional investors.

Not that investors have been ignoring the area. “There has been a better understanding of the nature of construction risk,” says Anish Butani, senior director for private markets at Bfinance. “The 2000s were very much about social infrastructure, from a UK perspective, PFI/PPP… The emergence of renewable energy and subsidies for new projects has encouraged some investors to look at that space more as part of that renewable-energy investment agenda. Inherently that has involved taking some construction risk.”

As managers have acquired brownfield assets with a construction or expansion element, this has helped to “demystify” construction risk, Butani says. In some ways, the emergence of renewables as a bankable, mature investment might have worked against greenfield infrastructure as a whole, as investment strategies focused on renewables have emerged.

In November 2017, M&G’s infrastructure business Infracapital closed its debut greenfield infrastructure fund at £1.25bn (€1.43bn). While the fundraising was successful, not all of the limited partners that were approached wanted to commit. Reflecting on the reasons investors gave, Infracapital’s greenfield managing director Andy Matthews says: “We met with some investors who had a more focused greenfield strategy based on pure renewables or PPP, whereas we had developed a broad diversified strategy to build core infrastructure through building platform businesses.”

While renewables are one way into greenfield exposure, they do not necessarily lead to other greenfield investments. As Butani notes, many wind projects involve high-rated, large corporate suppliers such as Siemens or General Electric, which can provide warranties or guarantees for their equipment. Other types of assets might come with higher counterparty risk.

Combating yield compression
One major economic trend in the past decade has been yield compression on infrastructure assets, both brownfield and greenfield. “Sometimes those [greenfield] risks end up being greater than people perceive, or price,” says Simon Davy, head of private markets at Local Pensions Partnership and an investment director at GLIL Infrastructure, a pooled investment platform created by UK local government pension funds.

“We’ve seen international investors coming in to buy stakes in [offshore] wind farms that are mid-construction, that have reached final investment decision… bidding a return that two to three years ago we’d have seen for an operational asset.” Some of those deals have not even reached high single-digit returns, he says. This compression, coupled with misgivings about construction firm counterparties, might well have dampened greenfield appetite.

Those misgivings are not baseless. In 2018, Deloitte warned that poor microeconomic conditions could lead to “a new construction crisis”, and pointed to insolvencies in the UK and Netherlands. The collapse of major UK contractor Carillion in early 2018, driven in part by loss-making private finance deals, was particularly high-profile, but it was not an aberration. Another major European contractor, Astaldi of Italy, has run into cash-flow problems and has been forced to sell its stakes in PPP projects.

In the case of Carillion, the normal mechanisms designed to protect investors on PPP projects failed to work. One Carillion project, the Royal Liverpool Hospital PFI, was terminated and will be completed with public funding. In theory, the lenders – which included funds from Legal & General Investment Management (LGIM) – should have been alerted to construction problems early on by their technical adviser and, if necessary, taken over the project. In practice, faults were not spotted until the project was no longer viable. LGIM had not commented on the matter by the time of publication.

Asked if investors are mindful of such failed projects, Butani says: “When thinking about greenfield strategies, the big challenge for asset managers is managing counterparty risk and dealing with subcontractors.” This is particularly an issue on projects with smaller counterparties, such as energy-from-waste deals.

Matthews says: “Some investors have had issues on greenfield projects; often they have been very project-specific issues but this does make them cautious over the longer term, and they may be cautious in taking construction risk again.

“Infrastructure investors across the world have long complained about a lack of bankable projects to invest in. In particular, the delivery of public-private partnerships has been steadily decreasing for over a decade”

This raises another perennial concern of investors: the lack of immediate yield. “I think when you compare greenfield to brownfield, you do need to consider the time from investment to yield,” says Matthews. Such a mindset implies a view on some investors’ part that greenfield infrastructure is a separate asset class altogether to brownfield, if it is seen as a quasi-bond investment.

Investors unfamiliar with greenfield strategies, and keen to push back on fees, may overlook the risk profile of a strategy when assessing fees, and go for the cheaper option, which will always be brownfield. “If you just compared two funds and didn’t review the strategies in detail… that might get lost,” suggests Davy.

Some investors are clearly concerned about a lack of infrastructure-investing skills – both for themselves and managers. “I think there has possibly been a surge in capital which has been moving into infrastructure,” says Davy.

“And some of these managers have been moving into areas where it’s harder for them to demonstrate a track record. What gives us cause for concern is when organisations or managers look to enter new areas or take on risks which they’re unfamiliar with.”

Matthews notes that Infracapital spent considerable time engaging with limited partners before the first close of its debut greenfield fund. “It took time to develop the strategy and discuss with the investor community the nature and scope of the greenfield fund,” he says. “This inevitably took longer than launching a follow-on brownfield fund.” 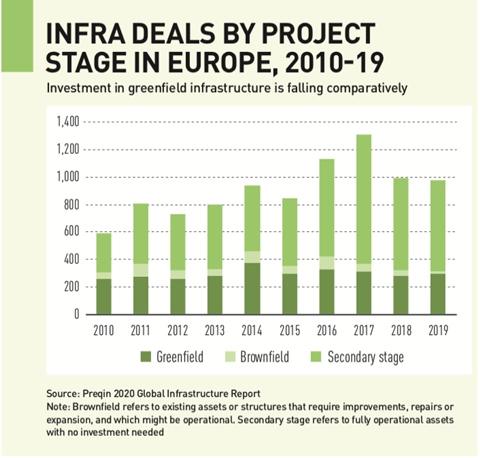 Infracapital is reported to be nearing a final close on a second, €1.35bn greenfield fund. The first fund has mainly invested in multi-asset development platforms, such as district heating provider Adven, which mitigates individual construction project risk.

Butani is optimistic that investors will continue to take on more greenfield investments in the near term. “Funds that a few years ago were 100% brownfield are now 20-30% greenfield, which means there is a change in style,” he says, adding that infrastructure has not yet reached saturation point among investors.

“I think there are many still turning the taps on.”

Taking the consolidation of UK local government pension funds as an example, he says: “Pooling is going to allow a number of those schemes to access infrastructure, and we’re only about to start seeing that in the coming years.”