Forestry: See the money for the trees

Money doesn’t grow on trees, but this could be missing the point. As some institutional investors have found, the trees themselves are valuable. And they tend to become more valuable over time as they increase in height and volume, making their lumber suitable for a wider array of purposes.

Civilisations as far back as ancient Mesopotamia learned that lesson the hard way when unsustainable use of wood caused the price of timber to rival precious metals and gemstones. Timber prices typically spiked just before those societies suffered sharp declines as lumber shortages curtailed ship construction, homebuilding and heating, and early Bronze Age manufacturing.

Thanks largely to the discovery of fossil fuels as the primary source of energy for industrial societies, wood no longer determines the rise and fall of civilisations. But wood continues to occupy a central economic role as material for housing, furniture, and a vast array of paper and packaging products based on new and recycled wood pulp. What’s more, forests are now understood to be the planet’s lungs, giving timberland an added dimension as a sustainable investment option for the increasing number of institutions that have social and environmental targets.

It is a significant market, with the total value of global investable core timberland standing at an estimated $125bn, according to Pension Consulting Alliance’s (PCA) June 2014 review of major asset classes. Institutional investment in timberland totalled $45bn as of 2011, according to Hancock Timber Resource Group, a unit of Manulife Asset Management. While there are investable forests around the world, the single largest market is the US, which accounts for 62% of the value, with Latin America a distant second with a 19% share, followed by New Zealand, Canada, Australia and the Finland/Sweden market with about 5% each.

Consultants say timberland can serve a unique function in a portfolio. “One of the main benefits of the asset class is the ability for investors to ‘store on the stump’,” says Daniel Butler, senior analyst at Courtland Partners. Since trees grow slowly, timber functions as both a factory and a warehouse. Growing timber builds value every year, and investors have the flexibility to harvest trees when timber prices are favourable, and delaying harvests when prices are down. Timber also increases in value as trees mature, because larger-diameter trees are disproportionately more valuable than smaller ones, Butler says. The end result is an asset that preserves capital, while adding significant diversification without adding a lot of volatility.

The risk-reward profile of timberland has been attractive, with returns negatively correlated to US equities over the past 10 years, PCA says. Timberland returns have increased each year for the past five years, according to the National Council of Real Estate Investment Fiduciaries (NCREIF). Reflecting better economic conditions, NCREIF’s Timberland Index posted a total return for 2014 of 10.48%, consisting of 2.86% from income and 7.46% from price appreciation. 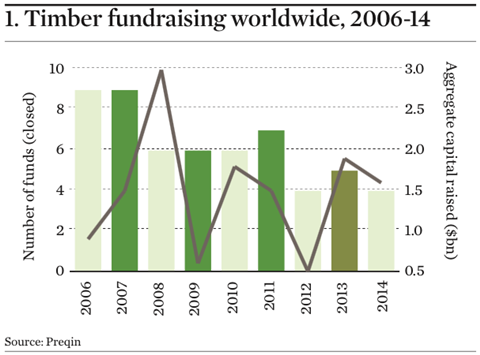 Timberland returns have also become competitive relative to other property types tracked by NCREIF. The NCREIF Property index, for example, posted an 11.82% return for the year. Since the inception of the Timberland index in 1986, the average annual return has been 12.59%. The index tracks the value of 452 investment-grade timber properties worth just under $24bn, encompassing 320 properties in the South, 83 in the Northwest, 16 in the central Lake States, and 28 in the Northeast.

While performance has been on the upswing, the volatility of timberland declined slightly through the end of June 2014, from an annualised standard deviation of 5.9% over the past 10 years, to 4.7% in the year through June, according to PCA. During that time, the volatility of timberland was only slightly above the Barclays Capital Aggregate Bond index, which posted a 2.4% annualised standard deviation for the first half of the year, with timber producing a 9.9% return, against a 4.4% return for bonds, the consultancy says.

Timber returns over the 10-year period ending June 2014 were similar to equities, but as more institutions have entered the market, PCA says the income portion of the return from timber has declined, leading to greater reliance on long-term price appreciation. Institutions began moving into timber in the mid-1980s, when ‘forest products’ companies began to evaluate the strategic role of their timberland holdings. Some saw the value of their forests, particularly in the underlying land, as a source of capital – they could sell the timberland and invest the proceeds in wood-processing facilities. Institutions with capital, a long time horizon – and in the case of US pension funds at the time a legal mandate to diversify their investments – became the new timber barons.

There are two principal ways in the US to access timberland. On the private side, direct investments in land and forests are made through TIMOs, specialised timber investment management organisations, which are predominantly closed-ended commingled blind pool vehicles with 10-15-year terms, or separate accounts that typically require $100m minimum investments. These vehicles can be broadly diversified by geography, type of wood or species, or focus on supplying wood for a specific product type or end market. On the public side are timber REITs, which typically invest in related assets beyond land. The timber REIT sector is dominated by four companies – Plum Creek, Weyerhaeuser, Potlatch, and Rayonier – but while REITs offer liquidity, being exchange-traded adds equity-market volatility.

The market for forests is highly competitive, with private owners and REITs often involved in key transactions. Investors were recently awaiting news on a 12,900-acre package of land from Hancock in Oregon, according to FIA. Olympic Resource Management was thought to be the high bidder, says FIA, but publicly-listed forest products company Weyerhaeuser had the right to match the winning bid. Late in 2014, Hancock sold 21,000 acres of Louisiana timber for $39m to CatchMark Timber Trust, a REIT based in Atlanta. A relatively new player in the public capital space, CatchMark was formerly known as Wells Timberland REIT. It has been acquiring land since raising $142m in a public offering in late-2013, and now manages nearly 400,000 acres of timber across the Southern US.

As a low-volatility diversifier with low correlation to core equity and fixed-income holdings, private timberland can fit in a wide range of allocation buckets. Consultants say timber is commonly placed in an institution’s real estate portfolio, but it can also be held in an alternative or specialty investment portfolio, and larger institutional investors may find a home for timberland in a natural resource or broad real assets allocation.

“Growing timber builds value every year, and investors have the flexibility to harvest trees when timber prices are favourable, and delaying harvests when prices are down”

Wherever allocated, timberland has also earned a position as a sustainable, renewable resource. Among groups monitoring forest sustainability, the Sustainable Forestry Initiative certifies that a forest’s management practices meet sustainability standards, as well as promoting chain-of-custody marks attesting to the percentage of content in wood products that comes from certified forests. The group has certified more than 240m acres of timberland around the world.

Today, sustainability concerns can affect institutions’ efforts to realise value from timberland holdings. The North Carolina State University Endowment is trying to sell the 79,000-acre Hofmann Forest, located in its own state, which it acquired in 1934 for timber income and research. Walker Ag Group had negotiated the purchase of the forest, but faced criticism over the perception of negative environmental impacts from converting timberland to agricultural uses, says FIA. A subsequent deal to sell 56,000 acres to Resource Management Services, a TIMO, and the remainder to an agriculture investment firm fell through in December.

Traditional investment managers are also investing in sustainable timber expertise. In 2012, TIAA-CREF bought a controlling majority stake in GreenWood Resources. Based in Portland, Oregon, the heartland of America’s sustainable economy, GreenWood specialises in fast-growing species such as poplar, which is used in paper production and as inexpensive lumber for shipping pallets.

Pension funds continue to invest in timberland. The Colorado Public Employees Retirement Association, which oversees more than $45bn, in January received a recommendation from Aon Hewitt Investment Consulting to increase the size of its ‘opportunity fund’ to $1.6bn. Timberland comprises 40% of the opportunity fund, which also includes commodities, risk-parity strategies and tactical opportunities. Colorado PERA already has positions with external timberland managers that comprise 14 timber properties with locations in the US, Canada, Australia and New Zealand.

Pension fund investors presumably know money doesn’t grow on trees. But they are certainly buying plenty of them to boost returns.