Institutional investment in emerging markets remains limited outside the largest funds. Georg Inderst explores the potential for this to change

Institutional investors are allocating more money to infrastructure but little of it is going to emerging markets. The vast majority of their infrastructure investments is in their home markets or in other OECD economies. The reasons are well known.

Private or unlisted infrastructure is a new venture for most asset owners, and there is little appetite for ‘doubling up’ risks by moving into a less known territory. This may not change very much in the future. As a recent survey showed, Europe and North America are the favoured regions, while less than 20% of infrastructure investors target emerging markets (figure 1).

Some leading international institutional investors have started to look for opportunities in emerging markets. They are looking for a wider investment universe, because of the shortage of suitable projects and the increasing competition in the main markets, which is pushing up prices.

Some pension funds have opened offices in Asia or Latin America – for example, Dutch pensions group APG in Hong Kong and CPPIB in São Paolo. The entry to emerging markets infrastructure is often facilitated by co-investments with investors and development banks. For example, APG is part of the Philippine Investment Alliance for Infrastructure, alongside the local Government Service Insurance System Fund, the Asian Development Bank and Macquarie. Several Danish pension funds launched the Danish Climate Investment Fund in 2014 for green investments in poorer countries.

Smaller investors often get exposure to infrastructure via private equity-type funds. According to data provider Preqin, about 120 funds targeting emerging markets were closed between 2004 and 2013, with a volume of about $40bn (€ 36.5bn). Another 50 funds are fundraising, seeking a further $20bn.

Such funds made an average of 50 deals per year over the past decade, about half of them in Asia, followed by Latin America and Africa. In terms of sectors, energy, utilities and transport have the largest shares, while social infrastructure, water and waste are “underserved” by fund deals in most developing countries.

To sum up, it is early days. International investor engagement in emerging markets infrastructure is limited. However, we should keep in mind how slow the process was initially with mainstream emerging markets stocks and bonds in the 1990s. 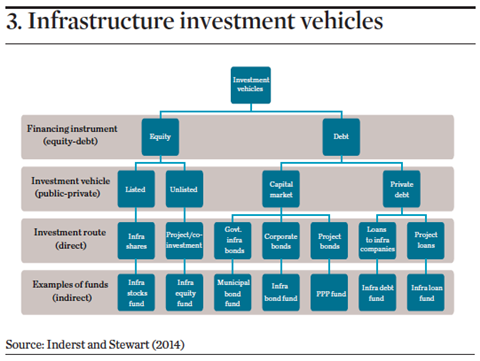 Of course, it is the poorer parts of the world that need fresh capital for infrastructure development most urgently. Future investment requirements in economic infrastructure are estimated at 6-8% of GDP in developing countries on average – in other words, twice as much as current spending. This is only to keep pace with economic and demographic growth. Social infrastructure and climate change-related investment would require additional resources.

Developing countries tend to rely on the state to finance infrastructure projects. The public-private composition of infrastructure finance there is roughly 2:1 as against a 1:2 in most developed markets. The PPIAF records 250 to 400 projects per year with “private participation in infrastructure” in low and middle-income countries (figure 2). They have combined budgets in the range of $150bn to $200bn, or 0.6-0.8% of GDP. However, the bulk of the money is concentrated in a few larger countries, including the BRICS and Turkey.

Given the constraints on public spending, most governments would like to see more engagement from private sources, especially institutional investors. There are various ways: one is privatisation, for example, in the form of ‘asset recycling’ of operational infrastructure to institutional investors, and using the proceeds to finance new projects. Another option to using public money is public private partnerships (PPPs). Some countries, such as Brazil and India, have substantial activity in PPPs, but overall volume in emerging markets is low.

The local investor base

What about the local investor base? Institutional investors are growing in developing countries and are potentially an important source of capital for infrastructure, with positive effects on the economy and capital markets. Overall pension assets in emerging economies are estimated at about $2.5trn, or about 10% of global assets. Similar figures apply to the insurance sector.

There are sizeable funds in the BRICS and some other large countries such as Chile and Mexico, but the pension systems in developing countries are typically small in relation to the size of the economy. According to the OECD figures, pension assets in OECD countries are 84% of GDP on a weighted average. In emerging markets, only a few countries (South Africa, Namibia and Chile) are near that level. About a dozen countries – mostly Latin American – have values between 10% and 30%, with the rest being below 10% of GDP.

However, a distinctive feature is the existence of large public pension reserve and social security funds. There are many such schemes in Asia, including Korea (with a volume of about $400bn), China, Singapore, Malaysia (about $200bn) and India (over $100bn). Several African and Middle Eastern countries also have relatively large social security funds.

This has an implication for infrastructure investing. A large public pension fund could have the scale and resources to invest in infrastructure projects and potentially take the lead for smaller regional investors. But strong governance is essential to ensure that the assets are invested prudently. Investment by centrally managed funds can easily be subject to political influence and poor capital allocation. Prestigious projects that turn into ‘white elephants’ are well known in poor (and rich) countries.

How active are local investors in infrastructure? It may come as a surprise that in some emerging markets institutional investors have been involved in the sector longer than their Europe or US counterparts. The first wave of institutional investor involvement in infrastructure came in the 1990s. Countries such as South Korea, Malaysia, Thailand, Chile and Argentina started to use corporate bonds and project bonds, listed and private equity to this effect.

A study for the World Bank Group found a broad range of investment structures in use across emerging markets. There are examples of listed and unlisted, direct and indirect, equity and bond investment vehicles. Some of them are purely commercial, while others are sponsored by government agencies or (national and international) development banks (figure 3).

Latin America has gone furthest in this respect. In Chile, the growth of pension funds since the 1980s has been instrumental not only in developing financial markets, but also in financing energy and transport companies. Mexico and Peru found their own way of engaging pension funds in infrastructure projects via dedicated trust funds and structured products. In Brazil, investors use various forms of infrastructure equity, bonds and private equity funds. Overall, BBVA research found exposure of Latin American pension funds of about 15% in listed instruments and 1.5% in direct investments in 2011.

There are also interesting examples in Asia and Africa. Kenya has issued several government bonds earmarked to infrastructure for domestic investors. In South Africa, the $150bn Government Employees Pension Fund (GEPF) and its manager PIC are main investors in the country’s road network, and also active in the affordable housing, power and health sectors. The Pan Africa Infrastructure Development Fund pools money from regional investors such as the GEPF, the Ghanaian Social Security and National Insurance Trust and some insurance companies, with the support of development banks such as the African Development Bank. Several countries such as Malaysia work on Islamic infrastructure Sukuk.

In summary, there are pockets of activity in emerging markets, but the investment volumes in infrastructure are small. The OECD Large Pension Fund Survey 2014 supports this view. It includes eight public pension reserve funds and 21 large pension funds from emerging markets. Only one of the first group and nine of the second group (eight in Latin America, one in Turkey, and one in South Africa) report infrastructure investments with total assets of  $400bn. The asset allocation of these 10 large funds is about 2% to unlisted infrastructure equity and 0.5% to infrastructure debt, resulting in a total of about $10bn.

Sovereign wealth funds (SWFs) are another potential source of infrastructure finance. The majority of SWF assets are held outside the OECD, mostly in Asia and the Middle East. New funds are being set up in other countries, especially those rich in natural resources, such as Angola, Nigeria, Gabon, Mauritania, Equatorial Guinea and Ghana.

SWFs have different investment motives and policies. Some of them recognise infrastructure as one of their main objectives while others are not active at all. In the Preqin database, 60% of global SWFs invested in infrastructure in 2014, of which 44% are based in Middle East and North Africa and 29% in Asia. Most of them undertake direct investing, with Europe and Asia being the largest recipients, often joining the race for operational assets there.

Several SWFs have sought investment opportunities in emerging markets, especially Chinese funds with a large number of ‘infrastructure for resources’ deals brokered in Africa. This raises the question of whether SWFs could crowd out opportunities for local and regional investors.

Barriers and risks for investors

Risks and barriers to infrastructure investment by institutional investors have been well flagged. These include:

There can be additional hurdles to jump for foreign investors in emerging markets, such as:

For domestic insurance companies and pension funds, regulation is a main hindrance in many emerging markets. There are many quantitative and qualitative investment restrictions on private, alternative, illiquid, project, and fund investments. Other rules can constrain foreign exposure, lower credit ratings, and the use of derivatives.

Governments need to ensure that incentives, pricing and regulation are aligned to attract private finance. They should aim for open infrastructure markets with a mix of domestic (for local knowledge) and foreign investor bases (for external discipline and international standards). Rule of law, political accountability, and clear infrastructure policies are paramount for investors. However, unexpected, if not retrospective, changes to rules, taxes and subsidies also catch out investors.

Georg Inderst is the principal of Inderst Advisory