Private infrastructure is finally being brought out of its infancy, writes Frédéric Blanc-Brude

Alternative asset classes all started off as exotic, undocumented propositions. Hedge funds, venture capital, commodities, even private real estate once were considered opaque forms of investments that only sophisticated asset owners would consider.

A few decades later, the same alternative asset classes are practically as established as stocks and bonds. Products have been standardised and, crucially, enough data has been aggregated to create a track record. Pooling information about illiquid, private assets was a good idea for everyone involved. As a result, regulators were able to integrate these products into a framework that makes them accessible to institutional and even retail investors.

This time has now come for private infrastructure investment.

Since 2015, the EDHEC Infrastructure institute has been collecting data from asset owners, managers and other sources to create the largest database of infrastructure investment data in the world. A few weeks ago, we released the first version of broad market investment benchmarks of private debt and equity for investors in European infrastructure, going back 17 years. Six of these indices are now available via Bloomberg, tracking the European private infrastructure equity (EIPEE) and debt (EIPDE) markets, as well as the project finance (EIPEEPF, EIPDEPF) and private infrastructure corporates (EIPEEC, EIPDEC) sectors.

Two key issues had to be addressed to create these benchmarks: sampling and valuation. First, index constituents have to be reliably representative of the markets being proxied. This had been a major limitation of previous efforts to measure the performance of private infrastructure assets. Data contributed by a few asset managers could not be trusted to be free of selection, survival and reporting biases.

Second, the well-known twin issues of ‘stale pricing’ and ‘volatility smoothing’ found in private asset valuations also plagues previous attempts. Infrastructure assets seldom trade and reporting financial performance on the basis of appraisals typically fails to represent the evolution of market values and to provide investors with a reliable measure of risk-adjusted returns.

Fifteen people worked on these two problems for several years at EDHECinfra, applying a rigorous approach, with the aim of producing financial metrics that could help bring private infrastructure investment out of infancy and into the next phase of its development.

For each national market tracked by EDHECinfra indices, a top-down approach is taken to ensure that index constituents will make a representative set of ‘investable’ infrastructure firms. Once a comprehensive list of each firm has been identified and categorised, a representative set is built aiming to cover 50% of any national market by book value in each year, going back to 2000.

This led to the identification of close to 3,000 investable infrastructure firms in 14 European markets and the design of a representative sample of 400 firms. Data for these 400 firms was then obtained from investors, managers, lenders, and other sources. This data was manually processed by a team of corporate analysts specialised in the infrastructure sector, reconciled and integrated in a database that is designed to answer the second challenge: asset pricing.

A second team of EDHEC researchers in finance developed a series of models to predict the value and volatility of each stream of equity and debt pay-outs, as well as discount factor models that could address the ‘stale pricing’ issues mentioned above.

The result is a quasi-market valuation of each firm tracked in the EDHECinfra indices: the index represents what a theoretical investor holding a representative set of the investable infrastructure of Europe in each year since 2000 would receive, assuming that they adjust the valuation of their investments to take into account any change in cash flow risk, at the constituent level, the evolution of interest rates, and the evolution of investor preferences in each year.

The table below shows the performance metrics of the EDHEC All European Infrastructure Indices on both the debt and equity sides. 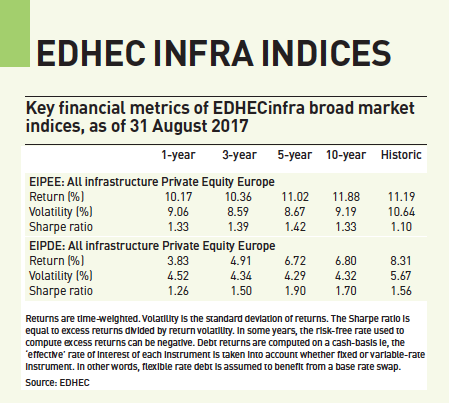 One of our most striking result is the role that portfolio diversification could play in infrastructure investors’ portfolios. At the individual constituent level, we find plenty of risk. A number of infrastructure firms defaulted and went bankrupt during the past 17 years in Europe. Private firms with concentrated ownership like infrastructure projects also tend to have more erratic dividend policies than listed firms. Long duration also means that large interest rate fluctuations can have a significant impact on value. The business risk of certain projects can also change and become more volatile over time.

Unlike the smoothed volatilities resulting from net-asset-value appraisals, the return volatility of individual constituents in the EDHECinfra indices can be substantial.

It is only once these assets are assembled in relatively large portfolios that the potential of infrastructure investment really becomes apparent: the covariance between individual asset return is low (infrastructure businesses tend not to be correlated) and, as a result, most of the individual return volatility could be diversified in large enough portfolios.

Here, the infrastructure investment narrative is clearly visible: relatively high excess return per unit of risk are available (for example, the EDHEC All Infrastructure Europe Broad Market Equity index has a Sharpe ratio of about 1.3x), but not because we failed to measure risk properly at the firm level. Instead, portfolio diversification is the key reason why this narrative becomes apparent.

This opens a number of questions about portfolio construction for direct investors and fund design for asset managers that will be addressed by future research and applications of the EDHECinfra benchmarks. These indices will reach global coverage by 2020 and be continuously updated.

With better data and methods, infrastructure investment can gradually evolve towards a more transparent, better understood and adequately regulated asset class, and join other alternatives in the age of adulthood.