The Democratic Party regained control of the US House of Representatives in the US mid-term elections in early November, setting up the prospect of two years of conflict between Democrats still smarting from the loss of the presidency in 2016 and a president who vowed to adopt a “warlike posture” if they followed through on threats to launch numerous investigations.

The prospect of gridlock became very real on election night. Unless the two sides can build bridges.

The need to rebuild everything from roads to airports is one thing both parties in America’s divided political culture agree on. Investors and analysts believe the Democrats’ win in the House increases the odds that the US will pass some sort of infrastructure financing bill at the federal level.

Overshadowed by the initial headlines about the Democrats retaking the House, the Republican party increased its majority in the Senate. “I think the election result increases the possibility of an infrastructure bill next year,” says Robert Poole, director of transportation policy at the Reason Foundation. “But it will have to be a compromise between something like the White House proposed back in February and the very unaffordable kind of thing the Democrats have talked about this year.”

The Trump infrastructure proposal died because congressional Democrats, as well as city and state governments, argued correctly that large investments are needed to fix our aging infrastructure, Poole explains. But with the trillion-dollar annual budget deficits projected indefinitely, Pole believes no major new federal funding for infrastructure is likely unless Republicans lose control of both houses of Congress.

The midterms resulted in divided government. But that need not prevent large-scale investment in infrastructure renewal, Poole contends. State and local governments, he says own hundreds of billions of dollars of infrastructure assets that are aging but still generating revenue. At the same time, infrastructure investment managers have raised several hundred billion dollars in funds that promise to deploy that money as equity capital in projects to rebuild aging infrastructure and add new capacity to the nation’s roads, ports and other essential services.

With government budgets strapped, Poole says, the way to bring these two parties together is asset recycling, which involves a long-term lease of an existing facility to a well-qualified operating company financed by experienced infrastructure investors. The company commits to rebuild and maintain the facility, while paying most or all of the annual lease payments upfront to a state or local government, which uses those proceeds to invest in other infrastructure projects that are currently unfunded.

Adopting an asset recycling approach in the US could help US pension savings be invested at home in projects that would improve US economic performance. American public-sector pension funds have been moving into infrastructure assets to diversify their portfolios and raise returns, Poole says. But both infrastructure fund managers and US pension funds find that most of the candidates to invest in are overseas, where long-term public-private partnerships are far more common.

The 2015 refinancing of the Indiana Toll Road lease illustrated the pent-up demand that US pension funds have for US infrastructure assets: 70 US public pension funds including California Public Employees’ Retirement System took part in financing the project to refurbish a critical road link between the Chicago-area logistics market and the Interstate highway network in Ohio, which connect international West Coast ports with the prosperous East Coast. 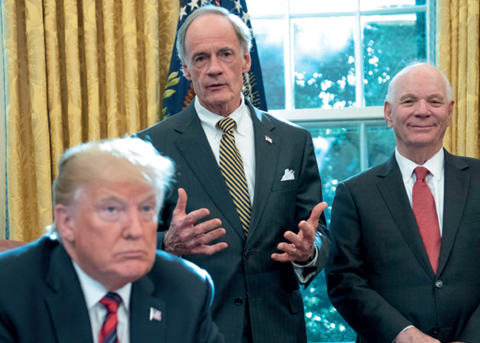 “This suggests a possible bipartisan approach to a 2019 infrastructure bill,” says Poole. “If Republicans and Democrats cannot agree on large new federal funding, reforms to encourage asset recycling might be an alternative. This would acknowledge Democrats’ call for increased investment, while respecting Republicans’ concern about the federal budget deficit.”

While politicians will wrangle over the details, the election outcome was supportive of a larger infrastructure programme in the US, says Jim Lydotes, manager of the BNY Mellon Global Infrastructure Income Fund. “Going into 2016 elections, infrastructure was the one topic that both republicans and democrats agreed on,” he says. “While we have not seen an extensive infrastructure spending plan, we have seen President Trump’s administration remove many regulatory hurdles that were put in place under the previous administration.”

At the technical level, clearing the path for infrastructure construction is essential to encourage any major increase in US investment in the sector, Lydotes says. “The previous administration implemented a number of environmental policies that slowed down energy and utility infrastructure building,” he says. “Over the past two years, we have seen a loosening of some of these policies.” Lydotes says this can be seen as “positive for business and energy infrastructure development”.

On the political front, Lydotes contends, “Republicans maintaining the Senate but losing the House of Representatives is supportive of the development of a larger infrastructure programme.” The reason is rooted in history: “the US government functions most effectively when there is a balance of power and there will likely need to be compromise on big issues.” 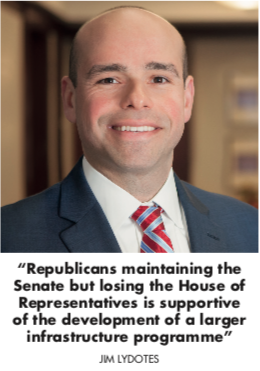 With Democrats and Republicans polarised on so many issues, the major political question in the US is what will be the major legislative agenda for the Congress starting in 2019, according to Jack Ablin, CIO at Cresset Wealth Advisors. “Clearly, President Trump needs a fiscal accomplishment and infrastructure could be it,” he wrote in a blog. “Given the $1trn deficit, it would be virtually impossible to pass infrastructure legislation without including the private sector.”

Beyond asset recycling, Ablin sees the public-private partnership imbued in the Qualified Opportunity Zone statutes of Trump’s recent corporate tax package as a useful blueprint for upgrading America’s neglected roads, bridges and airports. “Employing a favourable blend of private capital and generous tax incentives could get several long-overdue projects off the ground,” he said.

While the mid-term shift in power augurs well for infrastructure, Ablin said “it’s difficult to know if Democrats would go along with privatisation of infrastructure and the tolls and user fees that come along with it”. As a positive example, he points to a recent report in the US financial press that examined how upfront payments from the private sector in exchange for long-term leases on fee-generating infrastructure generated capital to repair long-forgotten roads and bridges. The report estimates that long-term leases on the 61 largest US airports alone could generate $250bn-360bn in upfront payments.

A successful federal effort to stimulate support for infrastructure investment in the US will require more than money. “Throwing money at a decades-old problem will simply not be enough,” says Cherian George, head of infrastructure for the Americas at Fitch Ratings. “As I have stated throughout much of this year, the lack of good policy decisions at a national and strategic level has kept the US stuck in reverse compared to other parts of the world as it pertains to advancing infrastructure.” While the opportunity certainly exists for Democrats to push infrastructure now that they control the House, George says “even mutual benefit will not translate to meaningful progress for infrastructure without better governance and strategic funding”.

Lydotes points to the 2008-09 Chinese economic stimulus plan, which was announced as the world was facing the global financial crisis, as an example of how infrastructure investment can be a way of stimulating the domestic economy. “China has been doing this for 20 years,” Lydotes says. In late-2008, the Chinese government stated it planned to invest ¥4trn, roughly $600bn, in infrastructure and social welfare by the end of 2010 to help the Chinese economy weather the financial crisis. “When the economy gets weak, the government stimulates it with fixed infrastructure investment, which in turn drives the economy,” he adds. “Perhaps the US could take a leaf out of that book.”

The macroeconomic environment may present an opportunity. “Markets have been weak and President Trump may be getting nervous,” Lydotes says. “But declining markets can often be economic stimulants. With a better balance of power, even with a little bit of continued malaise in equity markets, a stable infrastructure plan can be a good way of invigorating the domestic economy.”

Whatever the final form a federal infrastructure package might take, there should be little doubt that the prospects for infrastructure funding having improved as a result of the Democrats taking control of the House, says Sarah Tame, associate director of the EDHEC Infrastructure Institute. “Both parties have recognised the need for increased infrastructure funding in the US, and that much of this funding will have to come from private investors,” she says.

The Democratic takeover of the House may help accelerate a long-simmering trend. In 2014 a bipartisan task force of the House Transportation & Infrastructure Committee issued a report endorsing long-term public-private partnerships for infrastructure.

Four years later, the Bipartisan Policy Center announced its support for infrastructure asset recycling. While it has taken some time to develop, “the basis exists for a bipartisan 2019 bill based on asset recycling”, says Poole. While that might appear to be a modest step, Poole says, “it could be the start of something very big”.