As the pooling of the UK’s 91 local authority pension funds picks up pace, the ramifications for real estate are becoming clearer. Rachel Fixsen reports

The UK government’s plan for local government pension schemes to pool their investment assets has moved forward over the past year – even though certain aspects will take years to achieve.

The plan formally emerged in the summer budget of 2015, when the government announced it would work with the Local Government Pension Scheme (LGPS) to reform investments are managed.

At the moment, the LGPS is organised as 91 pension funds. As part of the reform the government has ordered the funds to combine their assets into large investment pools. In part, it is to reduce investment costs, but there is also political motivation to re-organise the vast pension fund resources so that the funds will develop the capacity and skills to become much bigger investors in infrastructure – and thus  help the UK economy grow.

LGPS pension funds in Scotland and Northern Ireland are not affected by the pooling. In England and Wales, however, eight new investment pools were announced last summer (see table), and the plan is for these pools to be formally established by 1 April 2018, with a phased transition of assets happening after that.

Six of the eight proposed pools had discussed their plans with Marcus Jones, the local government minister in the Department for Communities and Local Government (DCLG), by early December, and the Border to Coast, Central and Wales pools are understood to have been given approval to continue with their plans.

Colin Pratt, investments manager at Leicestershire County Council, which administers the Leicestershire Pension Fund – set to become part of the Central pool – has described the timetable as challenging, because of the many things that have to be done before the April 2018 deadline.

The idea of LGPS pooling has major implications not just for infrastructure investment, but also for real estate investment and how it will be held within the developing pool structures. 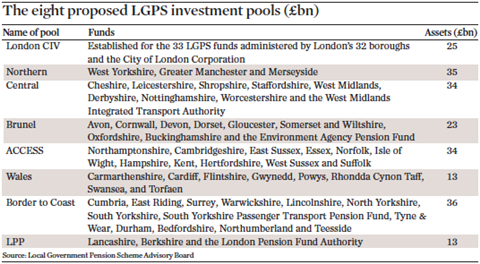 While it seems clear the pooling of LGPS assets should theoretically save the pension funds money by allowing them to have economies of scale in their investment, the most obvious and easiest way to achieve this could be by focusing on asset types with high volumes, such as passive assets, active equities and traditional bonds.

For illiquid assets – real estate included – it is a different matter. Simon Jones, senior investment consultant at Hymans Robertson highlighted some of the issues facing pension funds in the pools around illiquid assets in a presentation last November.

Existing exposure to illiquid assets would take time to unwind, he said, and it was important to manage the timing of exiting and entering illiquid investments. Exits affected the returns achieved, he pointed out, and entry affected prospective returns.

Even though this was a big potential area of savings, what was right for each pool depended on the level of expertise in the pool, the willingness to take on more direct exposure and being able to access attractive opportunities, according to Jones.

Meanwhile, Michael Dinsdale at Aberdeen Asset Management, said in England and Wales the LGPS has about £14.4bn (€16.8bn) of property assets under management, with about 45% of these being held directly, and some 55% owned as indirect investments, according to March 2015 data.

The Central pool has already said it is aiming to increase direct property investment at the expense of indirect holdings, as well as investing more in infrastructure.

The pool, which has about £2bn of property as both direct holdings and pooled funds, plans to reduce its indirect property investments partly though natural wastage – closed-ended funds coming to their natural end, with the money then being re-invested in direct property.

The change from indirect to direct real estate investment for the pool is expected to contribute to major cost savings.

The government-mandated exercise seems to have sharpened the focus on the benefits of asset pooling outside the public sector. In April 2016, the chair of the £49bn Universities Superannuation Scheme’s in-house manager, Virginia Holmes, said UK pension funds ought to collaborate more when investing in private market assets instead of competing for expensive in-house staff. Not every pension fund in the country had to create a “top-decile infrastructure team”, she says.

Mike Weston of the of the Pensions Infrastructure Platform, which was launched by the Pensions and Lifetime Savings Association to facilitate UK infrastructure investment by pension schemes, has made similar comments.

“While it seems clear the pooling of LGPS assets should theoretically save the pension funds money by allowing them to have economies of scale in their investment, the most obvious and easiest way to achieve this could be by focusing on asset types with high volumes, such as passive assets, active equities and traditional bonds”

Holmes has spoken out against very high levels of pay among Canadian pension investors, and said that if resources can be pooled, and teams can be paid in a way that is aligned with the skills they bring to deals, some “really interesting collaborative things” can be done.

While having eight pools may serve the purpose of maintaining healthy competition between investors for infrastructure assets, pension fund managers have also warned that too much rivalry would not work to the pension funds’ advantage.

The possibility of the eight pools separately bidding for the same asset was described by Antony Barker, director of pensions at Santander UK, as the worst thing that could happen, and he argued for “sensible” pooling that would produce the result the whole exercise was designed to do.

Although the LGPS pooling exercise has drawn attention to domestic infrastructure investment by the public sector pension funds, Fiona Miller, head of pensions and financial services at Cumbria County Council and chair of the cross-pool infrastructure group, has pointed out that it does not mean the funds will not still be global investors in the sector.

The national platform will be seen by the funds, she said, as a piece of their total allocation to infrastructure. “It’s about doing things differently so we can help drive down fees and improve the governance,” Miller says.

Fees would be reduced by pension funds doing some of the work themselves, by co-investing with managers and also by looking at deals the managers perhaps would not consider, as well as sharing resources between all pools. “The intention is not to do this eight times over,” Miller says.

The government has published advice that the UK Local Government Pension Scheme pooled funds should be structured as authorised contractual schemes (ACSs) and adopt a co-ownership model.

This is “a regulated and tax transparent vehicle for institutional investors in which assets classes can be held within separate ring-fenced sub funds”, says Melville Rodrigues, partner at CMS.

Investors hold a tenants-in-common/common property status and the vehicle is operated by an authorised fund manager with title in the underlying assets vested in a depositary.

“The assets are pooled for investment purposes but split when reporting to investors,” says Rodrigues. 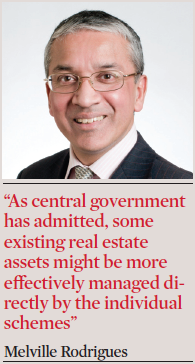 SDLT and LBTT (in general, levied at 5% and 4.5%, respectively, on direct real estate transactions) “would be a severe impediment to transferring mandates”, Rodrigues says.

“The Treasury has introduced a SDLT relief for seeding real estate assets into an ACS. However, the relief is restrictive. There is no equivalent LBTT relief, and the Welsh government has not indicated that it will introduce a LTT relief.”

SDLT does not apply to the issue, transfer or redemption of units in a co-ownership ACS. But if an ACS were to hold Scottish real estate assets, LBTT would apply, Rodrigues says.

The effect of the SDLT seeding relief is that no SDLT applies when properties are initially transferred into the ACS by investors, subject to certain conditions, including:

• ACS units must be issued by investors in exchange for the properties;
• The transfers must take place within a ‘seeding period’, which expires after 18 months (or by the time of the first third-party investment, if earlier);
• The relief threshold requires a portfolio of over £100m (€116m), of at least 10 commercial properties or 100 residential properties.

However, a clawback could be triggered by, for example, some or all of the ACS units received in exchange for the initial seeding being transferred or redeemed within three years of the end of the seeding period. Rodrigues says: “The ACS authorised fund manager is then liable to pay the clawback, and will no doubt look to risk-manage this liability, which could result in such ACS units being illiquid for three or more years.”

He adds: “In looking to implement the LGPS reforms and transfer the direct and indirect real estate mandates into ACS pooled fund vehicles, there are significant transaction tax challenges. As central government has admitted, some existing real estate assets might be more effectively managed directly by the individual schemes, with the pools only used if new allocations are made to real estate. A bifurcation could delay implementing the reforms for many years.”

Rodrigues is hopeful that central government – as well as Scottish and Welsh governments – will be persuaded by industry requests for concessionary legislation that would “facilite an efficient and consistent implementation of the reforms wherever the underlying UK property is located”.