Norges Bank Investment Management’s (NBIM’s) approach to real estate investment has changed as a result of its management mandate being amended with effect from the beginning of 2017. From that date, the oil fund’s property investments ceased to form part of its strategic benchmark index, which is now made up solely of equities and bonds.

NBIM now determines the size of its real estate investments, as well as the mix of these assets, within the general limits of the overall mandate.

It says the changes to the mandate ensure a “holistic approach to managing a portfolio that includes both listed and unlisted investments”. Listed and unlisted real estate is managed operationally according to a combined property strategy, it says.

At the end of September, just over 20% of the Government Pension Fund Global’s (GPFG) real estate investments were in listed property, at NOK58.1bn (€6.13bn) and the bulk of them were in the form of unlisted property, totalling NOK199.3bn.

Unlisted real estate alone accounted for 2.7% of the overall portfolio at that point.

Norges Bank Real Estate Management (NBREM) made several unlisted property deals in the third quarter after a period of low activity in 2016.

In July, it announced two Washington, DC deals through a new partnership with Oxford Properties Group, with the oil fund taking a 49% stake in each, paying $74m (€64m) for its investment in the one and $191m for the other. 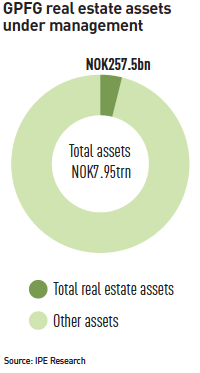 In the same month, it acquired 100% of an office property on the corner of Axel-Springer-Strasse and Zimmerstrasse in Berlin, agreeing to pay €425m once the building is completed in December 2019.

The fund also agreed to buy 100% of the property 6-8 Boulevard Haussmann in central Paris for €462m. The following month, it bought a 48% stake in 375 Hudson Street in New York City alongside Trinity Church Wall Street and Hines, in a deal costing $223m.

In September, Norges Bank created two new CIO roles for real estate in Europe and the US, promoting Romain Veber and Per Løken, respectively. Løken had focused mainly on UK real estate. Veber previously headed up the fund’s activities in France.

The oil fund’s returns on unlisted real estate outpaced those produced by its listed property assets in the third quarter.

Unlisted real estate generated 2.7%, against the 1.1% produced on listed property.

Within the unlisted property return, rental income net of operating expenses contributed 1 percentage point and changes in the value of the properties and debt gave 1.5 percentage points.

NBIM has still not been given the go-ahead by the Norwegian government to invest any of the oil fund in unlisted infrastructure assets, despite having made the case for adding such assets.

In April 2016, the Norwegian Ministry of Finance declared that it would not permit unlisted infrastructure investments because the potential benefits were unclear. Having considered potential changes to the way the GPFG invests and consulted the fund’s manager Norges and three external experts, the ministry said it was “uncertain whether unlisted infrastructure improved risk diversification or raised expected returns”.

Outlining a set of investment restrictions the fund could adopt, they said: “The risk in unlisted infrastructure investments can be restricted by investing in assets in the energy, communications and transport sectors in developed markets in Europe and North America. Collaboration with partners can be made a requirement, and limits can be set for the fund’s ownership stake.