The doctors’ retirement fund for the German province of Westfalen-Lippe is helping to build one of the largest onshore wind parks in Europe, producing 275 megawatts of power. In 2011 ÄVWL put itself on the map in the asset class as part of a consortium buying the grid operator Amprion from energy giant RWE.

Christian Mosel, managing director, is keen for the fund to remain a strong partner for infrastructure and real estate investments. “Deals like that take a lot of time and effort but we think they are right for us,” he said.

ÄVWL also invested in EP-Infrastructure, a portfolio of gas, electricity and district heating grids in central and eastern Europe.

“Infrastructure remains a growth segment in investment portfolios,” says CIO Markus Altenhoff. “It is now a European portfolio with brown and greenfield projects, and it can also take on moderate market pricing risks.” The infrastructure portfolio will become more international over the medium term, he says.

ÄVWL prefers direct investments, increasing its in-house resources to cover due diligence and structuring. Real estate has been a part of the ÄVWL’s portfolio since it was founded in 1960, making up more than 20% of total assets.

However,  the pension fund is cautious making new real estate investments. “We are only investing moderately and driven by opportunity in real estate, which can sustainably refine the portfolio, offer long-term secure cash flow or show potential for further development,” Altenhoff says.

To render ÄVWL’s portfolio “stable for a possible change in market cycles”, the fund wants to clean up the existing portfolios, reduce leverage, secure long-term rental contracts and improve properties via renovations and modernisations.

ÄVWL’s approach is to a search for sustainable investment solutions, including a preference for “assets with an ethical value as well as environmental and social focus”.

For its core portfolio the fund is looking at “locations with long-term economic stability and growth regions all over the world”. The focus is on mixed-use inner city quarters.

For Allianz, investments in infrastructure started with parking meters in Chicago more than 10 years ago. Since then the group and also its German entity have been busy building a strong real assets portfolio.

“Infrastructure investments are part of our core strategy, as such investments are a good fit for us as long-term investors,” says Andreas Lindner, head of investments for life and health insurance in Germany. In this asset class the insurer is “focusing on well-developed markets in which the sectors we are focusing on are well regulated”.

With liabilities from retirement provision contracts that last for decades, many insurers are looking for illiquidity premiums and long-term investments. But Allianz also has the size to play in the big leagues both in infrastructure and real estate.

In the latter, this is particularly true for large commercial projects such as the two largest forward deals Allianz signed last year: Kap West in Munich (due to open in 2019) and The Icon in Vienna with around 88,000sqm rentable space (due to open in 2018).

No deal sizes were disclosed but The Icon was the largest real estate transaction in Austria. Size is one of the unique selling points helping Allianz to continue to invest in markets with limited supply. “There are not many investors which can offer financing volumes between €200m and €500m,” says Lindner.

Investments in real assets are either done directly or via Allianz’s own funds and sometimes “suitable partners”.

The insurer is also investing in infrastructure debt and real estate financing. “This is done for objects Allianz would also purchase directly,” says Linder. At the moment these are mainly offices and shopping centres in Europe or in the US where residential investments are also a focus. 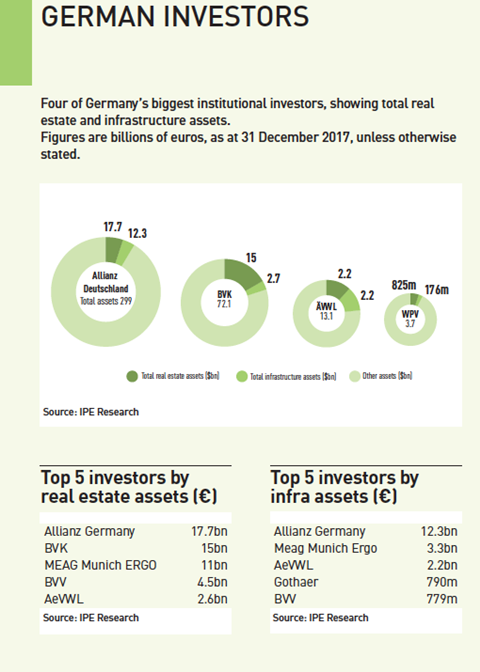 Since 2000, Germany’s largest pension fund has been expanding into international real estate markets. Before then it had only invested directly in Germany. In 2012, Bayerische Versorgungskammer (BVK) awarded global mandates to LaSalle Investment Management and CBRE Global Investors. But recently it has been looking to complement this with more targeted strategies.

In 2015, Alpha Investment Partners, CBRE Global Investors and Arch Capital were hired for specialised Asia mandates, and the following year Hines was hired to invest in European retail, while Patrizia Immobilien and CapMan were taken on to seek residential properties in the Nordics. Corestate Capital was appointed to invest in European micro-apartments.

Corestate Capital recently acquired 271 student apartments in Munich from developer Strabag Real Estate, and before that it bought five housing development projects worth €670m from an unnamed investor and developer CG Gruppe.

The management of the €1bn global property portfolio of Bayerische Ärzteversorgung (BÄV) – one of the 12 underlying funds that make up BVK – was outsourced to Deutsche Asset Management. The portfolio consists of 16 properties in 10 countries across Europe and the US.

This year, the professional pension scheme for auditors and certified accountants in Germany (except Saarland), has to start selling some of its holdings and be “more selective” when it comes to new investments. The reason: WPV has almost reached its target allocation of 25% real estate.

“The focus will remain on an international diversification of the portfolio and expanding the Asian exposure,” says managing director Hans Wilhelm Korfmacher.

WPV only began investing in Asian real estate in 2016. “So far we are looking into growth markets with higher risk-return profiles,” Korfmacher says.

The fund is also investing in real estate debt, especially in the US and in UK, where, in contrast to the German market, the competition from banks is not as high.

For new investments, WPV will continue to focus on office properties. “Niches are only playing a minor part because of the small spreads to traditional real estate segments,” says Korfmacher.

To avoid overcrowded core markets, WPV has diversified into value-add and core-plus strategies in recent years, both domestically and internationally.

Last year, WPV sold its one-third share in the Frankfurt office building Tower 185. It was probably the largest single asset deal in 2017, with Deka Immobilien paying €775m for the building.

The pension fund’s return on investment of its real estate portfolio was “well within the two-digit area” in 2017, notes Korfmacher.