The universe of German institutional investors is fragmented and various groups are moving at different speeds. Eva March and Manfred Mönch report

The institutional investor landscape in Germany is highly fragmented. More than 500 financial institutions managed about €3trn by the end of 2018.

The insurance sector is in a consolidation phase. In 2004 there were 108 life insurance companies registered with the Federal Financial Supervisory Authority (BaFin), which fell to 85 in 2018. Many companies have discontinued their new business, at least for certain tariffs, or sold their portfolio to so-called run-off companies.

Nevertheless, the volume of companies’ investment portfolios has grown in the past 10 years by one third to €938bn for classic life insurance, and to €103bn for unit-linked life insurance. Some 67 companies manage billions in assets, with 25 having at least €10bn. In addition, health, property and reinsurance companies manage more than €700bn.

According to Banking Statistics, these institutions had a balance-sheet total of about €2.2trn in 2018. Proprietary investment in securities accounts for €500bn – just under a quarter of this figure.

Owing to the discount rate, which has fallen to 1.9% in recent years, the pension obligations of DAX/MDAX companies have risen significantly to €450bn. Assets made available to finance these obligations have doubled over the past 10 years, remaining relatively constant at about €300bn in 2018 – despite a negative performance. This has resulted in an average coverage rate of  66%, with individual companies ranging from zero to 100%.

Of the 90 DAX/MDAX companies, 13 manage pension plan assets of over €10bn, almost half have at least €500m. The capital is mainly managed in contractual trust arrangements (CTA).

The municipal and church pension funds have more than €140bn under management. The 10 largest cover almost three-quarters of the total investment volume, with more than 20 institutions each managing billions in investment capital. In addition, dioceses and evangelical regional churches manage a substantial quantity of liquid assets. Seven dioceses and six evangelical churches have billions in assets here, often with significant equity and real estate portfolios.

“In the prevailing low-interest environment, the asset allocation strategies of many institutional investors is continually changing, with varying degrees of intensity and speed, depending on the type of investor”

In the prevailing low-interest environment, the asset allocation strategies of many institutional investors is continually changing, with varying degrees of intensity and speed, depending on the type of investor. The process is influenced by regulatory framework conditions and the design of benefit obligations.

While the decisions of life insurance companies are determined by their guarantee obligations, corporates enjoy extensive freedom in the investment of their plan assets.

The importance of direct investments in bonds has declined considerably in recent years. Even the conservative life insurance companies have decreased their bond allocations by more than 10 percentage points since the 2008 financial crisis. The move from bonds has been even faster for company pension funds, where the percentage has fallen by more than a third.

The process is most dynamic in pension funds for the liberal professions. Here, the percentage of direct investment in bonds now only amounts to about 30% of the total funds. Although some investors also control direct bond portfolios in external vehicles, the trend is clear as in recent years more than €400bn has been moved into indirect investments.

Many financial institutions initially increased diversification with bond funds by investing in corporates, high-yield, emerging market bonds, convertibles or debt structures. For a long time, equities across the board were not able to benefit from the decline in direct investments in bonds. In recent years, however, equity exposure has increased again, although investment has not reached the pre-crisis level at many institutions. 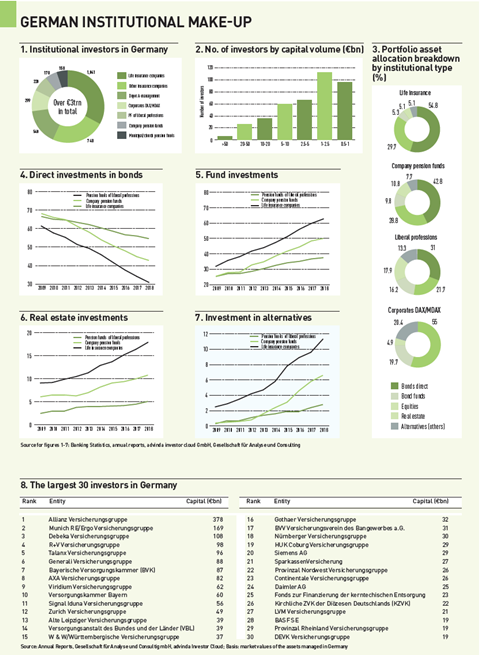 At the end of 2018, for example, life insurance companies had invested about 5% of their assets in equities, which is double the level in 2011, but still below the pre-crisis level. Company pension funds and pension funds for the liberal professions have recently made significant increases in their share of equities.

The highest percentage of equities is found in the pension plans of DAX companies: they entered the financial crisis with an average of 30-40% and have held 20-25% since then.

These three investor groups alone have invested more than €40bn in the real estate sector in the past five years. Corporates have been somewhat more reserved.

But alternative asset classes are also gaining in importance. While private equity has been part of many portfolios for several years, investments in infrastructure and renewable energies have only been made on a larger scale in the past six or seven years.

In the past two to three years, debt structures have also found widespread use as a new asset class.