Despite some challenges, the prospects for the Spanish real estate debt market are positive, write Mariana Mazzaferri and Nicole Lux

Following the global financial crisis, the Spanish real estate industry consolidated and traditional investment structures changed. Spanish financial reform has led to fewer but more professional banks. Just 12 large banks represent 90% of the market (including seven new entities), which has helped the sector to deal more effectively with non-performing loans and to restore confidence in the banking market.

These changes have created opportunities for new lenders, such as insurance companies, pension funds and private debt funds, to enter the market, as well as encouraging foreign banks to return to Spain.

However, fiscal policy could be more of a concern owing to the high levels of public debt and the structural deficit of 2.3% for 2019.

Months of political deadlock appear to be coming to end. In April of 2019, the centre-left Spanish Socialist Workers’ Party (PSOE) won the general election, securing a minority of seats (120 of 350). In January, it managed to form a coalition government with the left-wing Unidas Podemos.

Real estate yields are at their lowest since the global financial crisis, with rental growth remaining high, indicating a further extended cycle, attracting foreign investors. The strong return of foreign buyers also suggests that the property market is being supported by events beyond Spain since 2017.

Over the past two years, the Spanish real estate investment market has been dominated by US investors; 70% of the total investment in 2018 and 2019 has come from US capital. 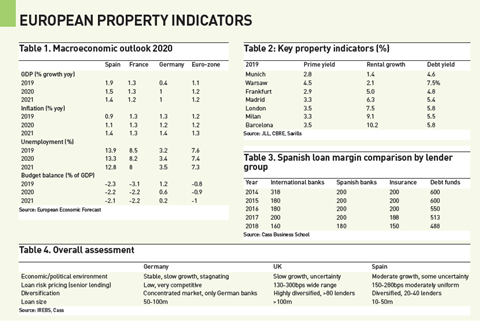 In the UK, for example, the secured-lending universe of loans against investment property (performing loans) is estimated to be £230bn (€270bn), with about 80 lenders active in the market. The UK is the most diversified market in Europe. UK banks provide 40% of real estate secured debt and foreign lenders, insurance companies and debt funds provide 60%.

The size of the German secured real estate debt market is an estimated €500bn, but only €300bn when excluding residential investments. The majority of German lending is done by German banks; there are hardly any debt funds active in the lending market. 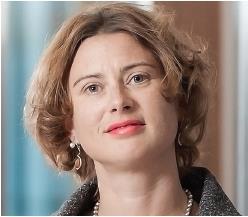 The Spanish secured real estate debt market is about €54bn (this does include some mixed-residential property) and offers a diverse market, with 41% of debt provided by Spanish banks, 40% by international banks, and 20% by insurers and debt funds. 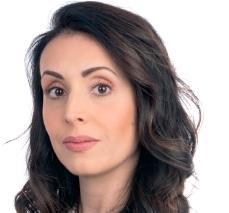 Although the Spanish new-loan market is only about 10% the size of the German market annually, foreign lenders find it easier to access and expand their lending share in Spain, which in 2018 reached 60% of the commercial loan market.

Loan sizes also differ between Germany, Spain and the UK. In Spain the €10-50m loan market is the largest in the country. The UK offers most opportunities for lenders focusing on loans above €100m, while in Germany the €100m-plus loan market collapsed between 2017 and 2018 to 14% from 37% a year earlier.

In market turnover measured by new loan origination as a proportion of total outstanding commercial real estate (CRE) debt, the Spanish market has recovered strongly since 2013, increasing loan origination in relation to overall market size from a low base since the crisis.

Spanish loan margins contracted to their lowest point in 2018 as a result of excellent competition in the Spanish CRE debt market and the growing economy. Supply and demand is getting tight; investors and lenders are suffering from a lack of high-quality assets combined with margin pressure for the best deals.

Loan-to-value (LTV) levels have remained conservative in Spain and the UK, while German loans can achieve higher LTVs, on average.

Overall debt yields achievable for a standard 60% LTV loan range from 5% to 6% for a prime office property in Madrid, which is similar to London. For German properties,  debt yields only range from 4% to 5%. Debt investors looking to achieve debt yields above 6% have to lower their LTV to 55% or find higher yielding properties in alternative segments.