While the European Central Bank (ECB) is not set to start purchasing euro-zone government bonds under its quantitative easing programme until March, there is nevertheless some evidence that it is already starting to have its intended effects, at least on financial markets. With the ECB set to purchase low-yielding government bonds in the hope of driving investors into higher risk assets (the so-called portfolio rebalancing effect), market participants have pre-emptively bid up prices for equities and high-yielding corporate bonds – Germany’s DAX 40 and the French CAC 30 are both up by 6% (to mid-February), while BBB-rated corporate bond prices are up nearly 15%. Moreover, February’s ZEW investor confidence measure for Germany recorded another rise, hinting that, along with lower oil prices, QE may have brought renewed confidence to the euro-zone core at least.

Of course, the Greek-Troika game of brinkmanship is the rather large elephant in the room. And, even in the event of a short-term solution, longer-term concerns are unlikely to dissipate in the next few months. However, while the Greek banks have certainly felt its impact (share prices are down 25% since the election), the response in euro-zone capital markets more generally suggests that the impact of QE is outweighing that of the Greek debt re-negotiation. In fact, although the spread between the other peripheral government bond yields and German Bunds has widened since late-January, the absolute level of those yields has fallen. It is only really Greece itself that has seen bond yields rise.

As far as QE goes, it will clearly not provide a permanent fix to the region’s problems. Arguably, it might allow them to be prolonged. However, there is a potential upside to economic growth that may yet emerge. Expectations of QE have already helped push down the euro, and as euro-zone manufactured goods and services therefore become cheaper in foreign currency terms, we should expect to see a boost to the region’s export volumes. Nevertheless, the currency bloc still faces a tough road to recovery and, with many national governments needing to maintain strict control over public finances, our forecasts for euro-zone GDP growth remain sub-consensus, at 1% in each of 2015 and 2016. 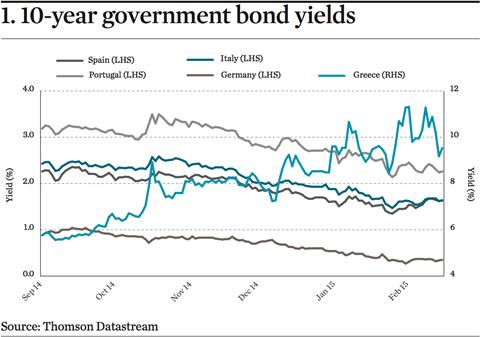 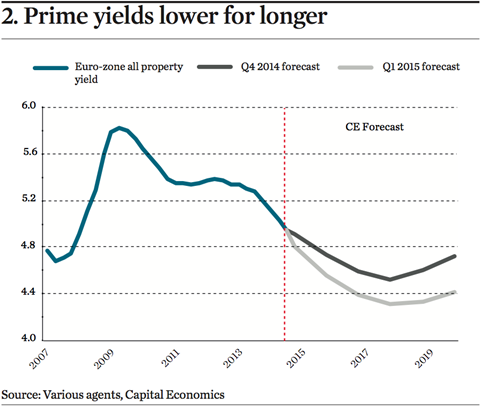 What does this all mean for commercial property? The impact of the ECB’s new QE programme on GDP growth and occupier demand will initially be stymied by the Greek debt re-negotiations. However, there could, in time, be a confidence boost to commercial property occupiers who may now initiate property plans that they had previously been delaying. This could help provide a fillip to rental growth towards the end of the year.

All the same, the much larger impact of the ECB QE programme on property is likely to be felt in the capital markets. We expect German Bund yields to remain at around 0.5% throughout 2015 and 2016 – and when they do start to rise, it will be a rather gradual process. So, yet again, we are talking of a backdrop in which bond yields will be lower for longer.

In isolation, this means that, having already appeared good value on a simple yield premium basis, prime European property will now look even cheaper. As a result, investors hunting for yield will increasingly be driven from fixed-income assets (many of which are yielding sub-1%) to property assets, where all but the very keenest yields are 4% or higher and the euro-zone all-property average yield is 4.8%. Indeed, one only needs to look at the experience of the US and UK QE programmes, where demand for real estate increased markedly. On top of this, investment demand is already strong – European investment volumes grew by 32% to reach €218bn in 2014 and are expected to rise again in 2015. Indeed, the latest INREV survey of investors and fund managers showed a net balance of 35% of respondents intending to grow their real estate portfolios in 2015.

This means there will be a vast and growing quantity of capital chasing European real estate. And with only a limited supply of prime assets, this is likely to heap further downward pressure on prime property yields. Therefore, while we predicted in our last set of forecasts that all-property yields would fall by 30bps over the next two years, we now expect a fall of more than 40bps, which would drive additional capital value growth of around 2.5% in the two-year period. We also expect prime property yields to hover lower for longer, meaning that euro-zone all-property capital values are now expected to continue rising throughout our five-year forecast period, experiencing a total capital value increase of 22%.

“While all markets stand to benefit from the impact of QE, the benefits will not be felt equally. The renewed euro break-up risk poses a threat to other countries that remain highly indebted and/or that are struggling with competitiveness”

But while all markets stand to benefit from the impact of QE, the benefits will not be felt equally. The renewed euro break-up risk poses a threat to other countries that remain highly indebted and/or that are struggling with competitiveness. Italy and Portugal, in particular, are among the most at risk from a significant ramping up in euro-zone break-up concerns. To be clear, any weak country exiting the euro would face a sharp fall in the value of its (new) currency. We believe this risk will be under investors’ consideration and may limit any major increase in competition for property in these markets purely stemming from QE.

On the other hand, non-euro-zone markets stand to benefit greatly. The UK will experience further flows of capital into London and, increasingly, the major regional markets. Demand for core assets in Sweden and Norway may begin to benefit from the currency weakness in those markets and the recovery in activity in central and eastern Europe will continue, as the region benefits from the hunt for yield. Indeed, even here, with yields in Poland and the Czech Republic tightening, the greatest opportunities may lie in Romania and Hungary, where yields offer historically high premia over domestic government bonds. 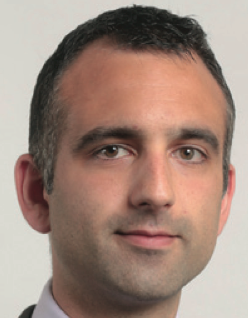 Therefore, while the impact of QE on occupier markets may prove to be muted, we are convinced that there will be a positive impact on prime property capital values in the next two years.

Kiran Raichura is a property economist at Capital Economics