If non-performing loans are not actively managed they inevitably decline in value and can drag on an economy. Italy should take note, write Ted Leary and Jack Rodman

We at Crosswater Realty Advisors have been watching the news from Italy on its economy and its fragile banking system. It appears that the Italians seem to think that jumpstarting their sluggish economy and resolving their non-performing loans (NPLs) are separate issues. They are not.

Having been intensively involved in NPL resolution programmes in the US, Japan, Korea and China, we would like to share some ‘fundamental truths’.

Almost every nation faced with a severe NPL problems claims ‘we are different’. Well, perhaps 10% of the problems they face have unique characteristics, but the remaining 90% are the same. Because of that it is crucial that governments learn from previous mistakes and successes.

In every market that has suffered NPL problems, the government and the banks have repeatedly made two mistakes. First, they underestimate the number and amount of loans that are presently NPL or are likely to become NPL if the market does not quickly recover. Second, they underestimate the true values of their NPLs by applying a static or constant dynamic in determining value. Such flawed analyses lead to poor decision-making and delays that only exacerbate the problem, thus making national economic recovery more difficult and costly to its taxpayers.

If NPLs are not actively managed they inevitably decline in value and become a drag on the national economy. 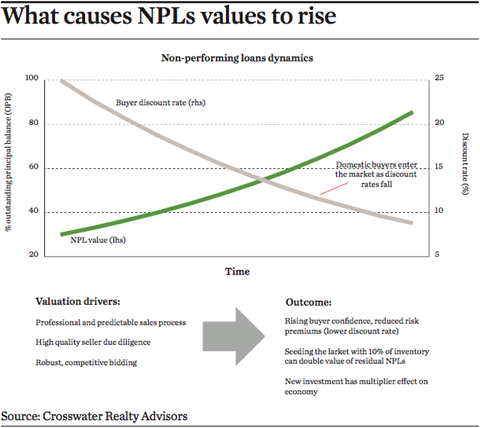 The concept of ‘warehousing’ NPLs in an entity created and controlled by the government is flawed and will lead to greater falls in values. NPLs must be aggressively ‘worked’ with a not-insignificant near-to-medium-term profit in mind. Recall that a – if not the – key reason for the success of the US Resolution Trust Corporation (RTC) was the Congressionally mandated use of the private sector to execute the programme utilising an incentive-driven compensation structure.

When loans are purchased by the private sector, it brings fresh capital to the country and stimulates demand for professional services (accountants, lawyers, consultants, appraisers and loan servicing staff). As the collateral is repaired or refreshed it generates the need for blue-collar labour (electricians, plumbers, carpenters). The process starts the economic recovery cycle with the added benefit of restoring confidence in the system. 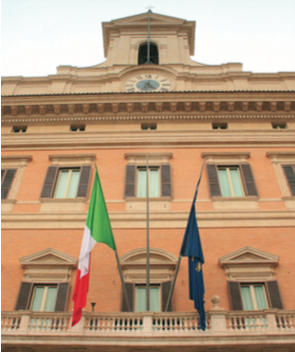 As a rule, moving bad loans out of the hands of the people who made them and into the hands of professional investors and workout people is crucial to any resolution. Doing this mitigates ‘moral hazard’.

The ‘hit’ to NPL values does not have to be taken all at once. It can be done in thoughtful steps, and, if properly executed, will lead to the gradual increase in the values of any remaining NPLs. The former chairman of the RTC, William Seidman, advised recalcitrant banks that, in disposing of their NPL portfolios, “their first loss will be their best loss” as early transactions will accelerate the recovery process.

Investor confidence in the structure, design and staffing of an NPL programme is crucial to drawing in outside capital to stimulate the economy. While countries’ capital and fiscal regimes may differ, investor objectives are similar and with an emphasis on internal rate of return (IRR) on invested capital. Another overlooked “key to success” is providing investors with quality due diligence and assurance that there is a “level playing field” and that the bid process is fair and transparent. A trusted financial adviser can enhance investor participation and stimulate investor bids.

Experienced outside investors – who have been active in many markets – will not enter a market only to ‘catch a falling knife’. They are too smart and too experienced. The more professionally designed and managed an NPL disposition programme is, the lower the risk to the investors and thus the higher the value placed on the NPLs being offered.

Furthermore, investors who can drive up the value of NPLs will not enter a market for a one-off transaction. The competitive bidding process is key to driving up values. Therefore, a successful programme must offer a predictable and organised series of transactions over an extended period to attract multiple investors. The highest bidder will win a single portfolio, but losers will become more aggressive in subsequent portfolio auctions.

It appears that the Italian government has gotten itself into some sort of ‘negative value loop’. Poor (in other words, unrealistic) pricing of NPLs has been coupled with a hesitancy to recognise what must be done. There has been poor execution of a meagre NPL disposition programme. This leads to further losses on the loans, compounding a sluggish economy and resulting in further losses on the loans. That negative loop needs to be reversed.

To jump start the Italian economy authorities must reverse that mindset and recognise that the sooner an effective NPL resolution programme (including carefully phased write-downs) is implemented, the sooner sophisticated investors will enter the market. History show us that values will gradually increase, the national economy will begin to recover and more money will come into the market and values will continue to increase.

We call that a positive value loop. Time is the enemy when it comes to NPLs.