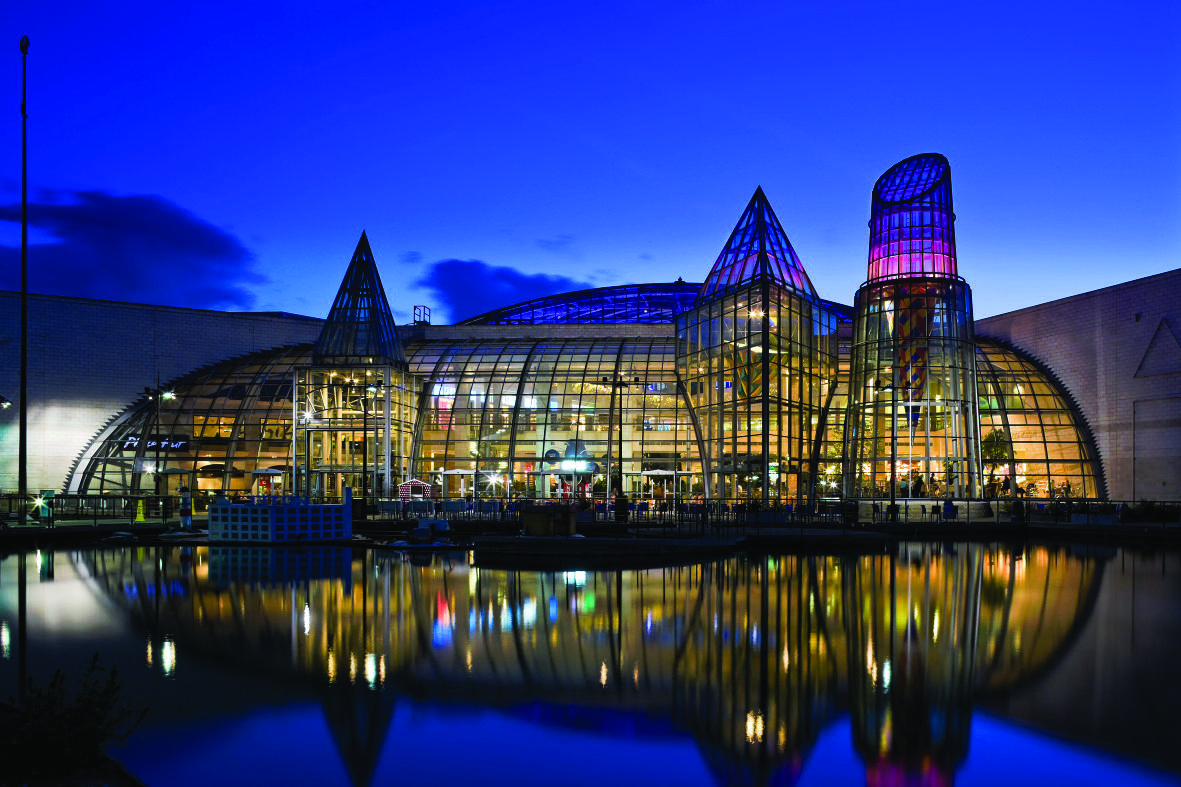 The REIT sector in the UK is growing again, buoyed by a strong property market and favourable reforms. Russell Handy reports

In one of Europe’s more established REIT markets and 24 miles away from the prime postcodes of central London, three REITs battled it out for a 30% stake in one of the UK’s largest retail assets earlier this year.

British Land, Hammerson and Land Securities, which all converted to REIT status in 2007, were in the bidding for Lend Lease’s share of the Bluewater shopping centre.

With the final yield driven down to around 4% – in line with prime Mayfair – the sale set a new “super-prime benchmark” yield, as DTZ noted of the hotly contested deal. Land Securities, with a market cap of £8.1bn (€6.05bn), eventually sealed a deal to pay £656m for the stake in June. By comparison, Intu Properties’ Trafford Centre in Manchester is valued off a 4.6% yield, according to analysts at Liberum Real Estate.

The multi-million pound Bluewater transaction says as much about the country’s retail sector as it does about the £35bn UK REIT market. At Land Securities’s annual results presentation earlier this year, chief executive Robert Noel told investors the firm did not expect rental growth across the “entire retail market”, adding that it would sell assets “less equipped for the future”.

In the second quarter of this year, investors continued to be more active outside London, according to CBRE, which estimates that around 60% of total investment in the UK occurred outside the capital.

In July, British Land said new lettings and increased footfall boosted results for the first quarter of its financial year.

Chief executive Chris Grigg said the occupational and investment markets in retail continue to strengthen. The REIT signed 334,000 sqft of lettings and renewals in its retail portfolio, with footfall up 2.5% year-on-year.

For Hammerson chief executive David Atkins, in the first half of this year there was an “improving consumer backdrop” in the UK. In 2012, the REIT shifted its focus away from offices and towards retail.

REITs with retail on their books will do well to keep an eye on consumer habits. Shoppers are more prepared to wait for offers, Hammerson noted this year, with ‘planned purchasing’ on the increase.

In its Considered Consumer report released in partnership with consultant Conlumno in July, the REIT said the mindset of the “considered consumer” is about the “perception of value rather than pure price”, with retailers experiencing a “dramatic shift in purchasing trends”.

Neverthless, with regional real estate back

in demand, shopping centres are enjoying increasing appeal. In the first half of this year, shopping centre investment rose £500m or 22% year-on-year to £2.73bn, according to DTZ. The weight of money chasing the sub-sector has resulted in competitive bidding and yield compression, with no let-up in demand, the agent notes.

“There is a large weight of money in the market,” says Barry O’Donnell, DTZ’s head of shopping centre investment.

By the halfway point this year, yields for prime shopping centres were averaging 5.25%, with secondary centres at 6.75%.

“The weight of capital being invested has seen a significant re-rating of investment yields,” says Redefine International, which estimates that, in 2013, yields for town centre-dominant schemes compressed by between 50 and 70 basis points.

High street retail is also experiencing increased investor appetite, DTZ notes, with a “healthy level of demand from institutional investors” and investment volumes up 30% year-on-year at the mid-way point of this year and transactional activity continuing apace. The agent says yields have hardened and will continue to do so in the UK’s main regional and provincial towns.

“With rental growth subdued and unlikely to compensate for yield compression, this may result in investors looking further up the risk curve as pricing on good secondary stock becomes more attractive by comparison,” DTZ predicts .

O’Donnell said the UK is only just beginning to see the start of Asian capital inflows. North American money is also a source of capital and UK REITs, with their knowledge of the market, are well positioned to partner overseas investors. Last year, Hammerson co-invested in the Bullring shopping centre in Birmingham with Canada’s CPPIB.

“Global investors are increasingly seeking exposure to the benefits of high-quality retail assets, which has had a beneficial impact on capital values,” Atkins said in July this year.

In the case of Bluewater, the UK’s three largest REITs were attracted by the proposition of long-term income. Annual rents from the 155,700 sqm centre are around £50m and could improve if vacancy is reduced from its current level of around 5%.

Cautious in suggesting that prime shopping centre rents can grow at an above-inflationary level, Liberum says UK retail rents have lagged real GDP growth by around 150 basis points since 2007.

“We are of the view that outperformance in prime shopping centres principally comes from buying well,” the analyst says.

In her Right Time for UK REITs column, McGregor said it “could well be the case that while the best gains have now been made in prime London offices – there is still “plenty of capacity” in retail and industrial, and particularly in the regions.

“If potential investors are hesitant and think the best gains have already been made, then they are surely mistaken,” McGregor noted.

Redefine International, while accepting that there is a general oversupply of retail space in some secondary and tertiary locations, sees robust demand for the “right type of large format retail and leisure space in the right location”. The company converted to REIT status in late 2013.

With the gap between prime and secondary property widened, the strongest performers in the UK’s listed sector last year were those that could deal with secondary quality portfolios, Corrado Russo, global head of securities at Timbercreek Asset Management noted in a report earlier this year.

Despite the appetite for and appeal of UK retail, McGregor, however, doubts that money is “flooding” into the REIT market as a consequence of a Treasury decision to reclassify the tax-efficient vehicle.

As of April this year, overseas REITs can now take stakes in their UK counterparts, now classified as institutional investments. The revamp – first mooted in 2011 – has the potential to shake up the now seven-year-old REIT sector and take it closer to the more mature US model.

“It is to be hoped that investors embrace the rule change, recognise the capacity that remains for returns on investment and provide the capital that is needed to propel the next phase of the UK property,” McGregor wrote.

The change comes at a time when – through their own self-imposed restrictions and those made on banks – REITs are less likely to use significant leverage. While acknowledging the efforts made by UK REITs to deleverage since 2006, Green Street Advisors highlights the risks of being over-leveraged at just 40%.

“With the costly benefit of hindsight, investors now know just how much trouble a high-quality listed real estate company can get into with a leverage ratio of ‘only’ 40% ahead of a severe financial crisis,” the company noted in its Heard on the Thames report in May. “We see no evidence that higher-than-average leverage helps companies, on average, in the up-cycle.”

McGregor says the prospect of joint ventures is a “promising option in the current climate where debt finance is no longer as freely available as it once was”.

In its Budget 2014 report, EY said the change was “highly welcome news”, allowing for more co-investment and joint venture arrangements with UK REITs.

“This is a change that we have been calling for over the last few years and one which we strongly supported in our consultation process,” EY said.

The British Property Federation’s director of policy Ion Fletcher said the change in legislation should increase the availability of capital.

There has also been more niche REITs emerging – such as those operating in the student housing sector.

For investors, the idea of being over-exposed to one sector might not appeal, however. “Investors could choose to invest in a specialist REIT by location or by sector,” says Rowe. “While a number of student accommodation REITs have emerged recently, we have yet to see a pure residential REIT but I think that will come. Investors ultimately want choice.”

Boyd Carson, a partner at Sapphire Capital Partners, says that those investors looking to use REITs to get their hands on the best-priced properties may already have missed the best opportunity.

He says: “If we were asked to do a REIT now, I’d be 90% sure we’d get the financing from investors. But, unlike two years ago, the difficulty would now be identifying the right assets for the REIT.”

Carson says Sapphire had been close to helping clients launch REITs in 2011, when prices were more attractive but the appetite to fund the REIT was not there at that time.

“For example, we tried to do a commercial REIT, focusing on distressed assets in locations outside London – but at that time there was simply no market for it,” he explains. “Likewise, when some of the banks could have easily

created a residential REIT in order to manage their distressed asset book, the banks were not ready for any type of ‘blue sky’ thinking and were more focused on getting their house in order.”

Conversely, he adds, there are now more investors in the market who will invest in REITs.

“But you probably wouldn’t get the kind of returns or pick off those assets that were previously available,” Carson says, adding that investors should now be considering very specialised REITs as a way of investing in property where there is some possibility of a decent return.

Capital & Regional’s purchase in June this year of Aviva Investors’ 52% stake in the Mall Fund took it closer to achieving its desire to convert the retail specialist to a UK REIT by the end of this year. With more than 30 REITs now trading and seven years after inception, the sector is growing again.