Renewables: Investors climb the risk curve as capital flows in

Investors are having to climb the risk-return curve as a record amount of institutional capital flows into the renewables market, writes Maha Khan Phillips 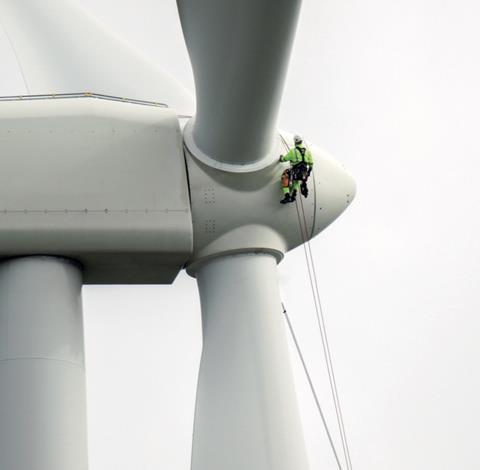 Don’t look down: Allocations to renewables are steadily increasing

The world committed about $500bn (€419bn) to decarbonisation in 2020. Research from BloombergNEF revealed that companies, governments and households invested $303bn in new renewable energy capacity in 2020, and an additional $139bn on electric vehicles (EVs) and associated charging infrastructure.

The figures are not surprising. Decarbonising economies has become a key goal for governments everywhere. For the world to fulfil the climate goals set out by the Paris Agreement, total annual investments in renewable-energy technologies would need to increase from about $300bn globally to almost $800bn by 2050, according to the International Renewable Energy Agency (IRENA).

More institutional investors are recognising the importance of renewables, both for performance and ESG purposes, as pension schemes set their own decarbonisation targets.

“The percentage of institutional investors allocating will increase significantly out to 2030 as the sector’s capital requirement accelerates to meet binding renewable-energy generation targets in every country,” says Dane Wilkins, head of the energy and infrastructure advisory group at JLL. “It will be institutions who like stable, inflation-linked, predictable, asset-backed cash flows that will increasingly provide the capital and long-term homes for these infrastructure type projects.”

Institutional allocations to renewable energy are expected to rise substantially from 4.4% to 7.1% over the five years to 2025, representing some $210bn in inflows, according to the Octopus Renewable Energy report, which surveyed institutional investors globally with a combined $6.8trn in assets. Diversification, ESG investing, and stable and predictable cash flows are key drivers of growth, according to the survey.

Darryl Murphy, managing director for infrastructure at Aviva Investors, says: “Renewables are not new. They have been the great growth story post the global financial crisis period. In the last decade, there has been enormous growth, and it’s one of the most active areas of the marketplace. Everyone wants to be involved.”

Investors are accessing the market for a host of different reasons. Stephen O’Neill, head of private markets at the National Employment Savings Trust (NEST), says the pension scheme wanted to balance out its climate risk, once it increased its exposure to infrastructure.

“Once we started to think about infrastructure, we started to think about all the different segments,” he says. “Our main allocation is to global core, transport, telecommunications, some renewables, and some industries at the margins of the old energy systems. We knew as we picked up core infrastructure that we would pick up a certain amount of climate risk and carbon risk, and we wanted to make sure that we had a counterbalance to that – to make sure we didn’t have too much concentration to the old world of high-carbon energy.”

In March, NEST announced a new partnership with Octopus Renewables to invest in clean energy across the UK and Europe. An estimated £250m (€292m) is expected to be committed by the pension scheme this year, part of a £1.4bn investment by the end of the decade.

O’Neill believes that the ESG argument for renewable investing cannot be separated from the argument about returns. “The principle behind ESG investment is managing ESG risks, and if you improve ESG risks, you improve risk-adjusted returns,” he says.

He also says pension funds cannot ignore renewables even if they want to. “Even if you approach a pension scheme that had never considered climate change or ESG issues, and they decided to allocate to the global infrastructure market, they would inevitably end up with at least 20% to 30% in renewables, because that’s a manifestation of the deal flow that is coming through.”

Another institutional investor increasing its focus on renewables is Canada Pension Plan Investment Board (CPP Investments), which combined its Energy & Resources and Power & Renewables investment groups to create its Sustainable Energy Group (SEG) in April.

“The creation of our Sustainable Energy Group was driven by a recognition that the changes we are seeing in investment opportunities are reflective of the evolution of the energy sector itself,” says Bruce Hogg, managing director and head of the new group. “Having one group that focused on all elements of the energy chain just made more sense. It also gave us more flexibility to look at newer energy opportunities like hydrogen.”

Hogg points out that the fund is more global than many other investors. Across the energy spectrum, it has C$20bn (€13.6bn) invested, which it plans to double that over the next five years if it can find the right opportunities. “This will make us a very significant player in this space. We are increasingly investing in co-control or control positions, which enables us to leverage our differentiated capital to provide tailored capital solutions for management teams. We work globally to give our portfolio companies the benefits of that scale,” he says. 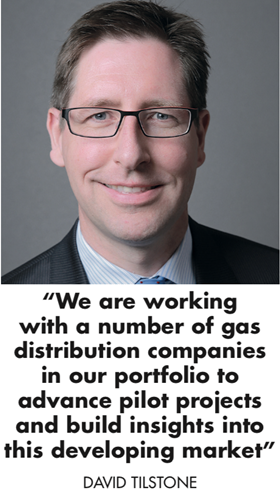 The fund is focused on renewable energy, energy storage, distributed energy and energy services. It has also been set up to have more flexible capital, a focus on investing in earlier-stage construction and development, and the ability to take and manage electricity risk and oil and gas risk. “We are looking at this as having a higher risk return than our infrastructure portfolio,” says Hogg.

The need to take on more risk?
Investors considering the renewables market should be aware that the risk-reward trade-off is changing, according to some industry participants. The market has traditionally been heavily subsidised, but that approach is being phased out as costs fall. IRENA has found that the cost of solar photovoltaic (PV) globally dropped 82% from 2010-19. Onshore wind costs fell 40% and offshore wind costs fell 29%. Renewables now represent one third of the world’s power capacity and one quarter of power generation.

“The big issue is that, historically, more of the activity in renewables has been driven based on subsidies,” says Murphy. “What renewables have been able to do is reduce their capital cost. The falling cost has meant that subsidy levels have fallen as well. So investors are trying to get their heads around the future of renewables, which is different because those subsidies are disappearing, and those subsidies reduce risk.”

Thomas Symons, director of investments at Willis Towers Watson, says the experience of investors and the timing of their entry into the market will always have a bearing on performance. “The original investors in renewable energy made very good returns in a nascent space,” he says. “Those returns are very difficult to achieve today without going up the risk spectrum, either through an early-stage investment, or the addition of leverage, or increased exposure to merchant power.”

Fund managers active in renewables are positioning themselves on different parts of that risk spectrum. In April, BlackRock Real Assets raised $4.8bn for its third global renewable-power fund, after receiving commitments from over 100 institutional investors. Freek Spoorenberg, director at BlackRock Renewable Power, says the fund looks for the best relative value globally, and for diversification opportunities, particularly across weather regimes. It is also allocating to earlier-stage opportunities. 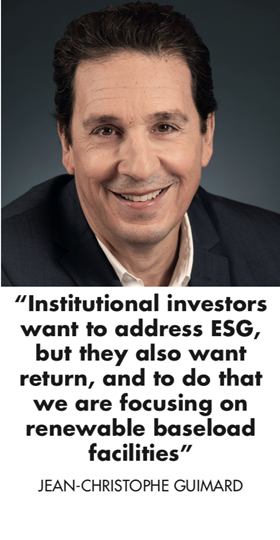 “We believe in build over buy,” he says. “There’s a lot of competition because people want to invest in these assets. The easier money is going into assets which are already built, so operating assets where there are competitive auction prices. We believe in building these assets from scratch, from development to construction. That creates better returns than just buying something pre-existing. It’s also important from a sustainability point of view. In order to achieve net zero, we have to build new projects.”

Macquarie’s Green Investment Group (GIG) is also targeting earlier-stage developments. “Undoubtedly we are seeing increasing capital flow into the more mature parts of the industry,” says Ed Northam, head of GIG. “That includes the more mature end of the project lifecycle. We recognise that there is a big pool of capital to support the more mature end of the industry. So we’ve pivoted our focus to more early-stage development, where we have the skills, expertise, and capital to produce more additive outcomes.”

Opportunities are also coming from less-established parts of the market. “We do think there is a relatively low hanging fruit to blend low-carbon hydrogen into the network,” says David Tilstone, head of renewables for EMEA at Macquarie Asset Management. “We are working with a number of gas distribution companies in our portfolio to advance pilot projects and build insights into this developing market.”

Global investment in carbon capture and storage tripled to $3bn in 2020, according to BloombergNEF. Investment in hydrogen stood at $1.5bn, which was down 20%, but was the second-highest annual number to date.

“The sleeping giant is the decarbonisation of heat and transportation,” says Wilkins. “It will be fascinating to see how hydrogen develops as a solution, either working alongside EVs, or to a greater or less degree in future decades replacing EVs. Some industry commentators point to hydrogen becoming the market leader in shipping and long-haul transportation, and EVs remaining the solution of choice for last-mile and shorter journeys.”

Another key area is battery storage. “The challenge with renewables is that energy generation is usually quoted as an average, but at any time, it can be generating twice that or zero,” says Ben Guest, manager of the Gresham House Energy Storage Fund, the UK’s largest operational utility-scale battery storage fund, which bought a 30MW battery storage project in Scotland in April. “It can be intermittent or volatile, and that creates a technical challenge. We see energy storage as the solution. It has great round-trip efficiency, and it doesn’t demand a subsidy, it is a merchant and commercial operation,” 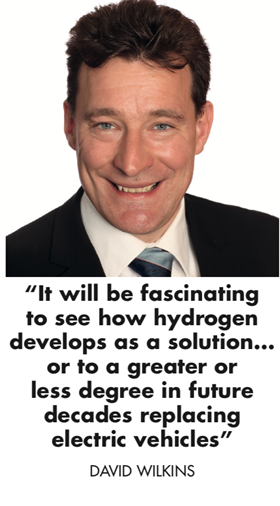 James Lindsay, head of institutional business at Gresham House believes that established technologies such as wind and solar will likely remain the primary renewable-energy technologies in a decade’s time because of their low cost of construction and operation, but that a substantial increase in battery energy storage system (BESS) capacity will be necessary to facilitate growth to balance supply and demand from the grid.

“It is worth remembering that there is also room for some ‘baseload’ generation assets in the system, as BESS alone cannot manage a fully intermittent generation fleet. Most market consultants there expect a growth in new nuclear capacity in the next few decades,” Lindsay adds.

Others are addressing the baseload issue in different ways. PEARL, Edmond de Rothschild’s private-equity infrastructure fund, is developing green baseload production in biomass waste and biogas, as part of a solution. “Our strategy is to be very focused and very specialised,” says Jean-Christophe Guimard, managing partner and co-founder of PEARL. “Institutional investors want to address ESG, but they also want return, and to do that we are focusing on renewable baseload facilities.”

The fund is targeting a growth return of 12-15% at a project level for equity. “Typically, the financial return in biomass is much higher than that of wind and solar, because you have to manage additional risk, technical risk, and use more complex facilities,” Guimard says.

Guimard believes a green baseload solution will not be the only solution for the energy transition, but will play its part. His colleague, Johnny El-Hachem, CEO of Edmond de Rothschild Private Equity, points out that the high amount of dry powder in the market means investors are searching for the right opportunities. In a post-pandemic world, there is also an appetite for thematic investing. El-Hachem believes that new projects that were not possible from a technology or risk point of view in the past, will now shape the future. “There are lots of opportunities in this space. I am optimistic that we are heading in the right direction,” he says.