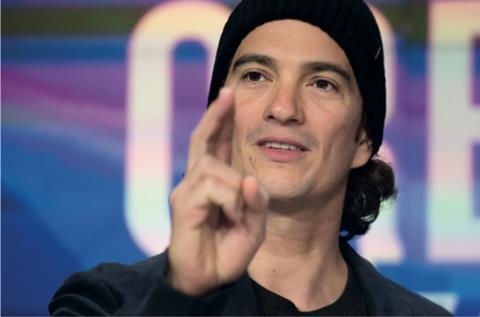 Billionaire property investor Sam Zell was characteristically candid when he assessed the initial public offering (IPO) of The We Company, the parent entity of shared office-space provider WeWork.

Zell’s assessment – a big thumbs down – is based on the belief that the fundamental economics of sub-leasing office space have not worked in the past, and a concern that the governance structure set out in the IPO document is detrimental to investors’ interests.

As IPE Real Assets went to press, The We Company had postponed the IPO amid weak investor interest.

“Every single company in this space has gone broke,” Zell said during an interview on US business news channel CNBC. His comment cut through efforts to position WeWork as a technology company – thus attracting a higher valuation – rather than an office property concern.

Zell, one of the savviest investors in the property market and chairman of Chicago-based Equity Group Investments, was not buying it. Fundamentally, he said, WeWork is an office subletting operation. “As a matter of fact, this kind of company began in 1956” when the practice of subleasing commercial office space first caught on.

For institutional real estate investors, those concerns raise questions about how the WeWork IPO might affect the broader office market. There are numerous competitors in the business of offering short-term leases of office space that has been rented on a long-term basis, and Zell notes that the property industry has contributed to the problem by leasing so many properties to WeWork that it has become the largest private occupier of office space in Manhattan, London, and Washington, DC. If WeWork encountered trouble finding enough tenants to cover the more than $47bn (€43bn) in lease payments it owes, the concern is that the excess supply could depress office rental rates across markets.

“They should have just changed the name of the company to ‘saving and loan’,” Zell said. “That’s really what you’re talking about, creating long-term liabilities and short-term assets.” Zell believes the prognosis is dim: “Every other time in history when they create that, results are predictable. Why is this any different?”

It is a critical question. The offering document disclosed that WeWork posted a net loss of more than $900m for the first six months of 2019 – on revenue of $1.54bn. The IPO proceeds were intended to provide sorely needed cash to maintain WeWork’s rapid growth. But as September wore on, financial headlines chronicled a steady decline in the expected valuation of the company, from $47bn reported in January, to potentially below $20bn (and as low as $10bn according to one report). 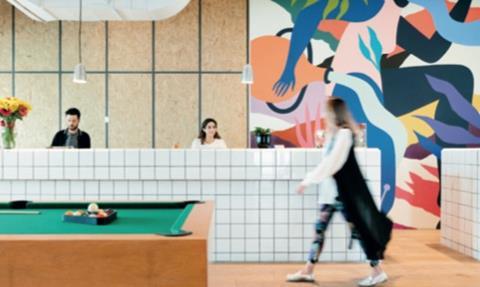 And while the public equity underwriting progressed, WeWork was also seeking additional debt capital. In August, the company entered into a commitment letter for a new senior secured credit facility providing for up to $6bn, which is expected to close concurrently with the closing of the offering, and is contingent upon the IPO raising at least $3bn.

Reports of the declining valuation have raised eyebrows. “How do you cut your valuation in half at this late date,” asks Ted Leary, founder and president of Crosswater Realty Advisors, an international real estate workout advisory firm. “I’ve seen plus or minus 10% on valuations, but you have to ask what is going on here.”

Pointing to what he calls the “space cadet” tone of the IPO document, which describes The We Company as a business that will “elevate the world’s consciousness”, Leary cautions investors with a classic warning about too-good-to-be-true deals, updated for the digital age. “I’m going to launch a new company called iBrooklynBridge and raise money from the same people who are thinking of investing in WeWork,” Leary says. “I’m highly sceptical.” 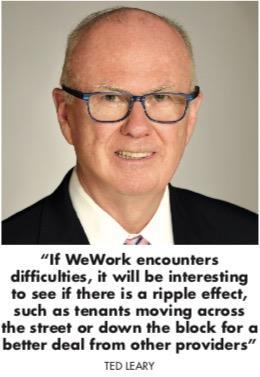 Leary recalls the case of Fijian Suites in Los Angeles. A property entrepreneur signed long-term leases with landlords, and sublet the space under short-term leases to small tenants, “who then disappeared into their home offices when the next recession hit”, Leary says.

WeWork presents the same risk. “The spaces are really cool, but there’s no loyalty,” he says. “If WeWork encounters difficulties, it will be interesting to see if there is a ripple effect, such as tenants moving across the street or down the block for a better deal from other providers.”

He adds: “This model has failed many times before… As we say in Hollywood, I’ve seen this movie before and I know how it ends.”

Rating agencies have taken the risks into account. In August, Fitch Ratings downgraded WeWork’s long-term issuer default rating to B from BB- and called attention to “financial structure deterioration”. WeWork’s margin “underperformed our base expectation by more than 20 points”, Fitch said, “as a result of growth and overhead investment that was 60% higher than expected”.

The company had about 1.25m workstations at some stage of development as of June, Fitch said, more than twice its existing workstations – and it expects to launch in up to 175 additional cities. As a result, Fitch “expects WeWork’s margin and free cash flow profile normalisation to take longer and be weaker than previously anticipated”. Although Fitch “believes WeWork can modulate its growth in the face of a downturn or challenges in its expansion, the margin for safety has been reduced materially”.

Concerns about how The We Company might affect broader property markets include the role of ARK Capital Advisors, a property acquisition and management platform. According to the IPO, ARK has acquired or entered into agreements to acquire more than $3bn of assets, some of which include buildings that WeWork currently occupies. IPE Real Assets recently reported that the platform paid $330m to acquire a San Francisco property in which WeWork is one of the tenants.

The $3bn of assets disclosed in the IPO document appear to be in addition to the capital target stated in May when The We Company announced ARK would initially deploy $2.9bn in total equity capital. The announcement said: “ARK will focus on acquiring, developing, and managing real estate assets in global gateway cities and high-growth secondary markets. By deploying a ‘tenant in tow’ strategy, with The We Company occupying some or all of ARK-owned real estate, ARK intends to immediately stabilise assets with a proven pre-packaged business plan.”

The We Company is the majority owner of ARK and the platform is chaired by Steven Langman, managing director of Rhône Group and a member of The We Company’s board. He is chairman of ARK’s management committee and also serves on ARK’s investment committees.

It has been noted that ARK might provide The We Company with a means to shift some of WeWork’s fixed-term lease obligations off its balance sheet, which could reduce the uncertainty stemming from the gap between long-term liabilities and short-term assets. But the structure, nonetheless, creates the potential for conflicts of interest in situations where The We Company’s business units face off against each other – ARK as a landlord seeking the highest rental rates, and WeWork as a tenant seeking the lowest rental rates.

The underlying concern relates to governance. Fitch notes that the company is seeking to maintain the CEO’s control through a dual-class voting structure such that the CEO has greater than 50% voting control, “and as a result will not be bound to certain corporate governance requirements such as having a majority independent board”. This arrangement “enshrines the key-man risk inherent in WeWork’s current framework”.

In addition, “Adam Neumann appointed WeWork’s real estate investment arm, ARK, as manager of certain buildings controlled by Neumann, with the authority to make investment management decisions affecting these buildings,” Fitch notes. Separately, “the company has increased its overall complexity through various ventures to purchase and develop properties outright. These and other capital allocation decisions, including acquisitions, which have been numerous, will likely face less independent scrutiny under a controlled company structure”.

A spokesperson for WeWork declined to comment on any questions from IPE Real Assets. A spokesperson for Ivanhoé Cambridge said the Canadian institution “is pleased to partner with Ark, The We Company’s real estate acquisition and management platform, to acquire and develop real estate properties globally”, adding that “we don’t anticipate The We Company’s potential IPO would impact our partnership in any way”.