Banks have been steadily deleveraging their exposure to commercial real estate loans, creating a gap in the market, which is being partly filled by non-bank lenders, including debt funds.

The valuation requirements for these funds differ from traditional bank lending to commercial property, which is typically done on an asset basis at the point of origination. As debt funds are required to manage a range of properties to produce a target return to their investors, the loans need to be valued as a portfolio on a quarterly basis for performance monitoring and reporting, as is the case with direct property funds.

While the individual property loans within the portfolio can be valued on a similar basis to direct investment, in some instances debt funds use ‘fair value’, which needs to include input from financial markets to quantify the cost of debt capital and the assumed risk-free rate. However, to feed financial market metrics directly into the valuation process poses an inherent challenge due to the higher level of volatility in financial markets compared with the relative stability of the income flows generated by the properties the loans are secured against.

Currently, some methodologies of fair value in debt funds use the 1-5 Year Gilt index as the financial metric in one component of the process. This is generally taken from the final day of the quarter in which the fund is being valued. But by taking the Gilt yield from an individual day, it is exposed to potentially significant movements in bond yields markets, which could be completely uncorrelated to the underlying property fundamentals, yet will have a substantial impact on the debt fund valuation.

Taking 2015 as an example, the credentials to lend to UK commercial real estate asset have generally strengthened – the economic recovery has filtered through into improved occupier demand, which has decreased void rates and placed upward pressure on rental values which, in turn, improves the landlords’ cash flow and their capacity to repay debt secured on their properties. But to demonstrate the disconnect between the markets, during the same year the Merrill Lynch 1-5 Year UK Gilt index redemption yield moved up and down by up to 10bps on a daily basis, which has potentially negative consequences for the valuation of the debt fund despite the underlying fundamentals on which the loans are based actually strengthening during the same period.

Consideration should also be paid to the variation in yields which compile the 1-5 Year Gilt index. Since 2004, the spread in yields between the 0-1, 1-3 and 3-5 year components of the 1-5 year index averages slightly over 60bps, and this spread has become more accentuated in recent years. And with the maturity of loans within a debt fund potentially coming in at any given point during that five-year period, applying one average to the overall fund is not directly correlating the risk-free interest rate length with the maturity of the loans.

But perhaps the most significant challenge is using a completely liquid and volatile asset in the form of a government bond yield to value a comparatively illiquid and stable asset class in the form of property income derived from cash flow to the landlord repaying the loan. Figure 1 demonstrates the inherent mismatch in volatility, comparing the quarterly change in gross income growth (effectively the property cash flow) from the UK MSCI Investment Property Databank with the quarterly change in the 1-5-year UK Gilt yield used in the valuation process. 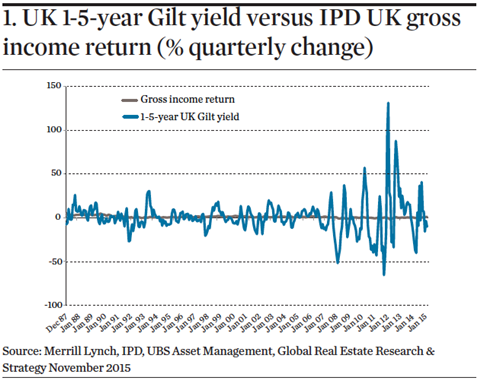 Whilst the recent exceptional volatility in government Gilt yields can be largely explained by the very low interest-rate environment, which exaggerates the impact of basis point movements, even if we compare the volatility in interest rates during the more ‘normal’ pre-recession period it is still incomparable to the stability of the cash flow which services the financing on the loan.

The fundamental issue with running quarterly valuations in this manner is that the information which is fed back to the investors on the fund’s relative performance and value may not be reflective of the underlying property and loan portfolio performance. Further shifts in the volatile interest rate market may not be at all correlated to the past, or likely future performance of the property loans and their borrowers’ capacity to repay the debt. 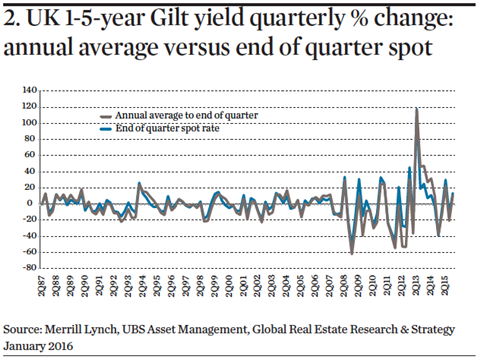 Valuing debt assets on a fair-value basis clearly does involve some measure of financial market volatility or, more specifically, some reference to the cost of debt and the risk-free rate. But, as demonstrated, the volatility of the chosen procedure is grossly out of kilter with the underlying cash flows servicing these property loans, and for the benefit of accurate reporting to investors these two should be brought closer in line. Any change to the valuation process will prove more complex but there are solutions.

Firstly, we would suggest that, rather than assessing the whole of the debt fund with a 1-5-year Gilt yield index, the individual loans within the portfolio were matched with the most comparable Gilt yield length (or alternative interest rate series) to their maturity, which is particularly prevalent in the current market where the spread between different lengths of short-term Gilt is larger than has been typical in the past. This will more accurately reflect the risk-free rate and cost of credit relevant to the length of the specific loans and provide a fairer overall valuation.

A further avenue which could be explored to closer correlate the financial markets with the property market is the use of a fixed-rate interest-rate time series that is more reflective of a commercial property mortgage – for example, those produced by the Bank of England. Both of these approaches would still encounter the issue of the financial metric being taken on a set date, which potentially allows very short-term movements to affect the property valuation.

To counter this, we would suggest taking an average of the interest rate from a set time period leading up to the valuation date. As figure 2 illustrates, taking an annual average of the Gilt yield to the end of the quarter, rather than the spot rate from the date of the valuation, still provides an element of the financial market volatility which is required to measure fair value, but without the severe movements which can be recorded when using the Gilt yield taken from a set day. This enables the valuation to be more reflective of the financial market over the full period of the valuation, rather than just one point in time which can vary significantly and cause unnecessary fluctuations in the debt fund valuation which do not correlate to the underlying performance.