While few can ignore the economic uncertainty in UK real estate, some major deals were struck at the end of 2016, writes Russell Handy

The UK’s Brexit referendum in June last year has created uncertainty. In December the Bank of England warned that commercial real estate remains at risk.

However, a £436m (€495m) five-year loan from Morgan Stanley and Cheyne Capital Management for Brookfield’s CityPoint tower suggests no lack of confidence in UK property.

Morgan Stanley provided a £335m senior loan reportedly priced at about 225bps and at a 60% loan-to-value ratio, while Cheyne’s £101m mezzanine loan was priced above 8%.

Vincent Nobel, head of real estate debt at Hermes Investment Management, says institutional appetite for UK commercial real estate debt is largely based on the strength of the underlying market, which he says is “robust, despite the ongoing political uncertainty”.

“As we are currently in an environment where capital values are under pressure, we like real estate debt for its relative stability,” he says. “Combine this with the returns that you get on real estate debt investments and it makes it a very attractive asset class.”

Despite the uncertainty, appetite for debt funds focused on the UK is growing, says Amy Aznar, head of debt and special situations at LaSalle Investment Management. “Institutional investors increasingly see real estate debt as an investment strategy which can offer downside protection whilst generating attractive current yields and risk-adjusted returns,” she says.

Brexit is unlikely to result in an adjustment in UK commercial real estate values like in 2007-09, says Jon Rickert, an investment director at GAM Real Estate. “The market value decline will be limited and Brexit will create attractive opportunities in real estate private debt strategies, which are largely protected from any near-term fall in property values,” he says.

Despite an expected slowdown in the UK economy, commercial property risks are manageable. “Leverage is lower during this cycle, which should limit borrower and lender distress; loan-to-value (LTV) ratios offered by banks are around 60%, relatively modest compared to LTVs above 80%, which were very common prior to 2007,” Rickert says.

The most notable impact of Brexit on UK real estate is uncertainty regarding real estate fundamentals – particularly the occupational market. LaSalle, however, has noted continued strong appetite for real estate, particularly from overseas investors. Aznar says: “We always examine each opportunity on a case-by-case basis, so the outcome of the referendum hasn’t changed our investment strategy in this respect,” she says. 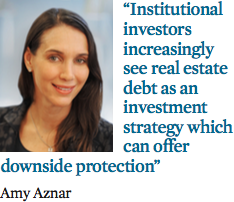 Brexit, says Martin Wheeler, co-head of ICG-Longbow, has “undoubtedly increased occupier uncertainty. Whilst this is most apparent in the City, it’s also increased throughout the UK.”

The firm, he says, prefers to lend against “diversified income streams” and focus on the resilience of underlying cash flow, which he says is “now more important than ever”.

Wheeler said the firm had been given “strong support from investors throughout fundraising and “particularly in the immediate lead up to and aftermath of the EU referendum. Over the years we have seen that, as investment markets become more risk averse, institutional investors’ interest in real estate debt as an asset class increases relative to other real estate strategies,” he says. “This remains the case in the current post-referendum environment. We’re seeing strong current interest for whole loan strategies and defensive senior debt.”

Wheeler says that with senior debt margins experiencing an “immediate upward adjustment” of about 0.25% to 0.50%, political uncertainty is already reflected. “As we head into 2017, we are not seeing any pressures for this to reverse,” he says. “But we see the continuing pressure on banks’ capital being of equal importance in the future direction of margins.”

Any tightening of lending criteria by banks could provide opportunities for alternative or non-traditional lenders. “Bank lending activity, particularly secured by real estate, has been constrained for the last several years as banks adjusted to the new regulatory environment and dealt with poorly performing legacy loan portfolios,” says Rickert. “This has created attractive investment opportunities in private credit, which are likely to continue as banks take a further pause following the EU referendum.”

Laxfield Capital’s UK CRE Debt Barometer found that lending volumes fell in the second and third quarters of last year compared with their three-year average, with large deals particularly down. But the firm found that the third quarter was active for those with mid-market loan requests for opportunistic acquisitions.

There was, the firm said, “muted finance demand for large London assets immediately before and after the referendum”. Emma Huepfl, co-principal of Laxfield Capital, said “irregular market conditions are reflected across our report, which covers the quarters preceding, and immediately after, the referendum”.

Head of real estate finance EMEA for HSBC Bank UK, Steve Willingham, told delegates that there are “few certainties in the world right now. But against a backdrop of volatile equities and bonds, a grade-A tenant on a 10 or 15-year lease in a well-located building will be highly attractive to many investors. As long as you’re structuring a conservative proposition focused on sound income with a stable tenant and strong covenant, then we still believe real estate to be a good sector to lend to.”

According to the Bank of England’s review of bank lending to small and medium-sized companies in 2015, 75% of those companies that borrowed from banks used commercial real estate as collateral. The FPC agreed that there was the risk of “further adjustment” in the sector. “This could create financial stability risks, given the reliance of the market in recent years on inflows of foreign capital, and given that valuations in some segments of the market continued to appear stretched,” the committee said.