There are several signs pointing to the emergence of a new commercial real estate debt fund sector in Australia. Sharon Hayes reports

The nation’s sovereign wealth fund, the Future Fund, and First State Super, one of Australia’s largest superannuation schemes, were the debt providers in a consortium led by Brisbane-based Cromwell Property Group bidding for the Morgan Stanley-controlled Investa Property Trust.

It is understood that the Future Fund and First State Super were prepared to support Cromwell with a debt package of AUD400m (€250m). In the final round, Cromwell was edged out by China Investment Corporation, which clinched the coveted portfolio of premium office towers in Australia for AUD2.45bn.

At first glance, the position the two funds took in the bid was unprecedented. Normally, they would have been expected to be equity investors. However, both the AUD117bn Future Fund and AUD52bn First State Super are seasoned debt investors in offshore debt markets.

Damien Webb, head of income and real assets at First State Super, says pricing for the Investa portfolio of office assets appeared “full” and that participating in the debt was the more attractive option.

Recently, First State Super set aside AUD500m for lending on commercial property in Australia. It is one of the first Australian super funds to recognise the potential of the asset class, having invested in debt.

Webb says the fund has switched its focus to the UK and Ireland because banks there are still repairing their balance sheets.

The Future Fund, meanwhile, has been allocating to debt since 2006. In the middle of last year it revealed that it had AUD11.3bn invested in debt, but it does not publicly disclose the types of debt in its portfolio.

Back in 2002, property executive Greg Paramor established the James Fielding Mezzanine Capital Fund, with Singapore’s sovereign wealth fund GIC as majority partner with a AUD100m holding. In 2010, GIC gave an even bigger mandate of AUD300m to another group, Challenger, Australia’s largest non-bank lender. Evidently, GIC still believed in the potential of an institutional real estate debt market in Australia.

Fewer than half a dozen Australian super funds, including Telstra Super, the building industry fund CBUS, the nation’s largest super fund AustralianSuper and the mid-sized Hesta Super moved into the domestic debt market.

There is growing evidence that the market may be turning in favour of non-bank lenders. Martin Priestley, who joined CBRE Capital Advisors team to launch a debt origination and loan servicing business for Asia Pacific, describes it as “a perfect storm”.

First, he says, long-term property owners are seeking to lock in loans with long-dated maturities of seven, 10 or 15 years to capture low interest rates. Typically, banks are unable to lend beyond seven, or even five.

“If an investor purchases or holds a building leased to the government for 30 years, it makes absolute sense for them to lock in funding for 10 years or more in today’s low-interest environment,” Priestley says.

An example is Growthpoint, a listed real estate investment trust, which refinanced its bank loans with a 10-year AUD200m facility sourced from the non-bank market in March.

Second, says Priestley, banks are under pressure from new prudential guidelines to lift their capital adequacy provisions against commercial real estate lending, forcing them to progressively lift their loan-to-value (LTV) and spread pricing, thereby leaving a bigger funding gap for other debt providers to fill.

This is most evident in the residential development sector. The LTV ceiling in large projects is now capped at 55%, even when risks have been mitigated with presales of apartments.

Approvals for new apartment construction are at an all-time high in Australia, but banks are becoming increasingly nervous of overheating in the housing market.

Priestley says 10-year money is available today at less than 5% interest, and that pension funds or insurance companies will be quite comfortable to lend for that kind of return when the income is assured and fully secured for 10 years. The return, he adds, is better than Australian government bonds, which offer less than 3%. 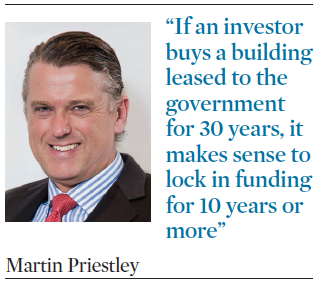 Globally, commercial real estate debt investment is now the most popular alternative asset class, according to the CBRE Asia Pacific Investor Intentions 2015. It shows that 30% of respondents have already invested in real estate debt, against around 15% in both infrastructure and leisure/entertainment.

Forum Partners, which has a pool of US$400-500m(€356-445m) for debt investment in Asia Pacific, has placed two debt tranches, totalling AUD80m in Australia.

Gregory Wells, Forum Partners’ head of Asia says the firm sees opportunities in sectors ranging from student accommodation, retirement villages, and logistics to self-storage and hospitality in Australia. So far, he is comfortable with returns on his investments, which have yielded total fixed returns of 12-14% an upside from profit or equity stake in the vehicle.

At least three Australian fund managers are actively raising capital from institutional investors for their debt funds, including Qualitas and MaxCap Group. If they achieve their targets, the collective raisings will be as much as AUD2bn.

Wayne Lasky, MaxCap Group manage director, says: “There is a massive imbalance between supply and demand in Australia’s $230bn commercial real estate debt market. Between 85% and 90% of this market is controlled by four major banks. When you look at the idiosyncratic nature of property, it seems contrary to its very make-up to have such a narrow finance market.”

But an industry leader in Australia’s non-bank debt market, Michael Wood, senior partner with Quadrant, is sceptical that sponsors will reach their targets. He is still not convinced that super funds have warmed to this asset class.

Over the past decade, Quadrant has raised close to AUD1bn from Australian super funds, including the Future Fund and First State Super, to invest in the US and the UK debt market. However, Wood declined to confirm this, citing client confidentiality. He does concede that raising capital from Australian institutions for commercial real estate debt has been – and is still – an uphill battle.

Wood says there is no denying that Australia needs an alternative source of funding to the big four banks, but that non-bank funders have been unable to mount a meaningful challenge to the banks’ stranglehold.

Quadrant estimates that, by 2019, there will be in excess of AUD7bn per annum of surplus real estate capital available from domestic super funds to invest. Put plainly, Australia will run out of core property for super fund investment.

“This will inevitably lead to a defining of the opportunity set that will include real estate debt, “ says Wood. “That said, it is evolutionary not revolutionary.”