The European Central Bank’s Asset Quality Review is essential to avoid Japanese-style stagnation. Jos Short explains why it is a price worth paying

As the deadline for the European Central Bank’s (ECB) Asset Quality Review (AQR) fast approaches there has been a rush by banks to unload their loan books, often at discounts close to 50%.

In fact, it is estimated that €584bn of real estate loans are still to be worked out, against €41bn sold to outsiders in the first half of 2014 and €31bn in the whole of 2013. This means there is going to be a large amount of distressed real estate assets coming to the market. US investors are at the forefront of those looking to take advantage of this rush, with 77% of the money used, so far, to buy secondary real estate loans attributed to them.

A total of 760 bank loan portfolios have been selected for detailed examination as part of the AQR, which started in November 2013 and is due to be completed in October 2014. This covers total bank-book risk-weighted assets of approximately €3.7trn, representing 58% of the total €6.4trn credit risk-weighted assets of the banks being examined, of which corporate loan portfolios make up 65% of selected assets. In its insistence on standard methodologies for describing risk and flagging non-performing exposures and in applying one unchanging approach to asset valuation, the ECB is attempting to create consistency, transparency and a high standard of risk identification across euro-zone banks.

While this review will certainly sting in the short term and accelerate the decline in aggregate bank lending to real estate, it is an essential step in emerging from euro-zone stagnation and in achieving ‘real’ real estate growth again. It is the injection of money from new sources that will have the greatest impact on the loan books and free the banks to start lending again.

It is widely acknowledged that aggregate bank involvement in commercial real estate will be a fraction of its 2008 level. What is not agreed on is whether this is a good thing or a bad thing. Indeed, the overwhelming views emphasise the bad – a yearning perhaps for the glory days of 2004-07 when 20-30% IRRs were commonplace, driven by a then unacknowledged bubble and more than 80% bank funding.

A more considered view would be that the popularity of – mainly core – commercial real assets over the past three years has been the product of financial market imbalances. What economists know is that occupier demand for real estate is – over the long term – a function of the real economy. Unless we can grow GDP and emerge from what looks like stagnation, real estate will fall prey to different financial market imbalances.

It is just beginning to look as if we have learned to do this in the UK and bank involvement has been key – but most of the euro-zone lags. If we are to avoid the type of moribund economy that has afflicted Japan, revitalising euro-zone bank lending to commerce and industry is vital.

It might seem strange that we advocate a process that is already accelerating decline in aggregate bank lending to real estate. The answer to this is threefold:

• Although the historically low level of euro-zone interest rates has made real estate an integral part of an investor’s portfolios, it has not fired up the productive economy as intended. The one slightly shining light, Germany, has benefited more from exchange rates than from interest rates;

• Real estate, and other real assets, are now truly established as essential parts of the institutional portfolio, but at core level they might already be overheated, so the inflow of secondary assets is welcome;

• Real estate’s fundamental attraction for the investor is based on four elements: relative security of asset value; perceived inflation protection; growing occupier demand brought about by land restriction, which only really applies when the fourth element is present; and growth in the local economy.

We have every reason to fear and fight back against the threat of European economic stagnation. To achieve economic growth, the diversion of bank lending away from safe real assets into the productive economy is vital. It is now being achieved in the US and is beginning to be achieved in UK, but the euro-zone banks are lagging.

Figure 1 reminds us of how deep-seated stagnation can be. In the early 1990s, Japan’s GDP plunged from more than 5% to an average of just about 1% over the subsequent 20 years – at a time when the tech revolution was empowering other mature economies to norms of more than double that. A major cause was the inability of the banks to unwind themselves from the collapse of monumentally overheated commercial and residential real estate values. This type of Japanese future is looming over the euro-zone (see figure 2). 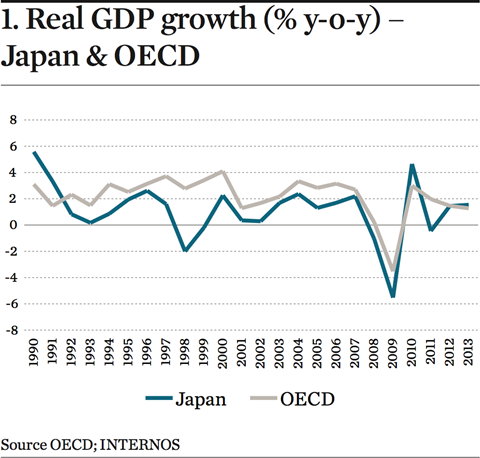 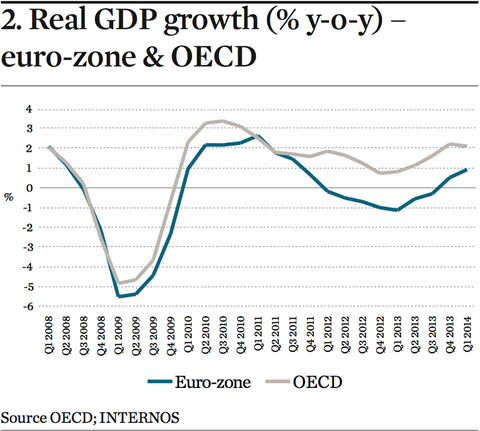 Private sector lending by US banks, which  plunged in 2010, now outstrips the euro-zone despite bank lending in Europe being historically six times the level in the US as a source of growth finance; US industry relies much more on bond or equity issuance.

The reason why US banks can out-lend European banks to the private sector is undoubtedly that, under pressure from a single regulator, US banks took the big hits in terms of provisions in their accounts in 2008-11.

It is reasonable to suppose that it is just such an outcome (a US, as opposed to a Japanese, future) that ECB  president Mario Draghi is seeking. It will hurt in the short term but the benefits for the real economy and for the long-term real future of real estate will be significant.

Draghi’s AQR is clearly intended as a prelude to a momentous reshaping and reform, not just of euro-zone banking, but of the European economy. The transparency that it requires of the banking system is to be welcomed. Already its effect has been to attract a tide of, admittedly opportunistic, capital from outside Europe.

Although we could fear new dreadful revelations of bank inadequacies, in practice, we should not. Those unknown black holes already have an effect on lending, and exposing them is the first step to reform.