MIPIM: APG, Invesco, Barings focus on secular trends in the face of inflation

Rising inflation is likely to hit parts of the UK real estate market in the short term, but investors should pay more attention to longer-term secular trends, delegates heard at MIPIM UK.

Speakers from Dutch investor APG and investment managers Invesco and Barings agreed that ‘mega-trends’ relating to demographics and technology were likely to have a greater bearing on real estate investments than near-term movements in inflation and interest rates.

The panel debate, held at MIPIM’s fourth annual trade fair in London, took place during the same week that the UK’s Office for National Statistics showed that the consumer-price index (CPI) had climbed to its fastest rate since April 2012.

Martijn Vos, senior portfolio manager for European real estate at APG, admitted that the fact that CPI had reached 3% was a cause for concern for its £2.5bn UK real estate portfolio.

He told Richard Lowe, panel moderator and editor of IPE Real Assets, that the main worry was the effect it would have on disposable income, particularly for retail and housing sectors.

A rise in interest rates – widely expected to be implemented by the Bank of England next month – also has the potential to affect low-yielding assets, he said.

APG, the largest pension fund investor in the Netherlands, has recently been building an exposure to the emerging private-rented sector (PRS) in the UK.

If disposable incomes continue to fall as a result of inflation, the PRS market – already a low-yielding one – could be affected. But he said this was likely to be a short-term impact.

“On the short term there is this disposable income effect that might jeopardise some of the shorter-term prospects,” he said. “However, the demographics are so good that I think in the long term it is still a good investment. 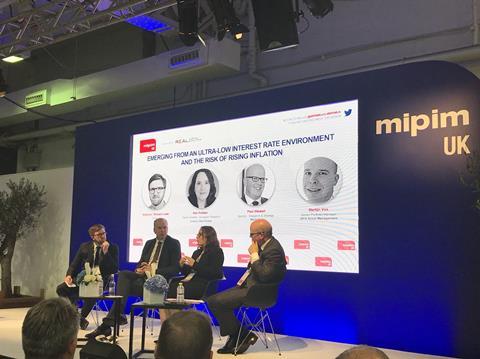 His sentiments echoed a theme that came up throughout the discussions – that secular trends will ultimately outlast shorter-term inflationary factors that seem to be more to do with Brexit and the devaluaton of sterling.

Vos said APG was still investing in UK real estate, “but not to the extent” seen in recent years. This slowdown was actually prompted by last year’s EU referendum result. Brexit is making it impossible to really make sense of the movements in inflation.

“I think it’s more the EU referendum outcome issue,” he said. “Once that is out of the way, things will be more stable and then you can really see how interest rates and inflation – and those kinds of fundamental factors – will really behave. Because to me a lot of the current [rise] could be a short-term anomaly.”

Kim Politzer, senior director for European research at Invesco Real Estate, agreed that inflation seemed to be coming from one-off factors, such as Brexit, rather than the labour market. It was difficult to know the long-term impact, she said.

Paul Stewart, director of research and strategy at Barings Real Estate Advisers, expected to see a rise in interest rates next month, but he did not think it would be “the beginning of the end of the low-interest rate environment”.

Both Politzer and Stewart, who oversee European research for their respective international real estate firms, proceeded to make the case for UK real estate in many parts supported by more structural shifts.

“For prime properties you have a greater risk on the yield side if interest rates were to move up, but equally there are many secular and structural trends” that are likely to be bigger drivers over the long term, he said.

“Notwithstanding the risk around these low yields, I find it hard to see past genuinely good core properties in the right locations with the beneficial secular drivers in their favour.”

Politzer said: “I think it is a good time to be thinking about some of these secular trends. Because investing in real estate is a long-term strategy.”

She added: “We would never say that a market is closed. There are always going to be opportunities. In this environment you do have to think very much about what the long-term story for the asset is as well as whether there are short-term opportunities.”