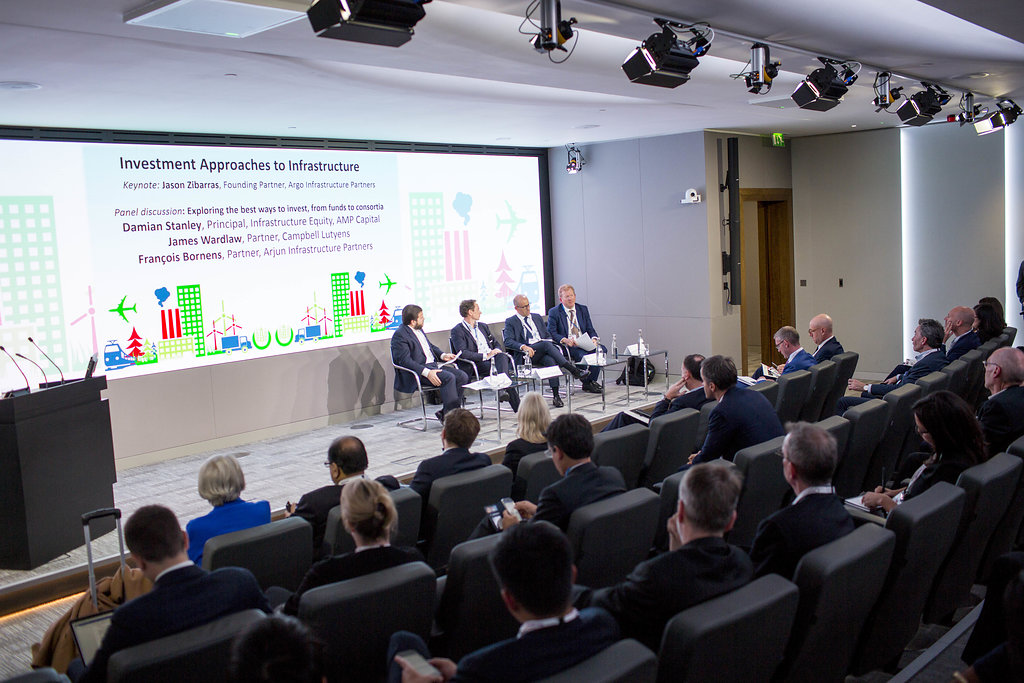 The London Stock Exchange is where the real world meets the financial one. Its headquarters in Paternoster Square still provide a physical presence in the city, but the trading floors of the past have been replaced by a virtual equivalent. The building at 10 Paternoster Square is a temple to modern finance and is in stark contrast to its 18th century neighbour, St Paul’s Cathedral.

Marcus Sperber, head of global real estate at BlackRock, was reflective of the surroundings with his opening words. “We have been constructing large-scale real assets in one form of another for much of time,” he said, before referring to the earliest known example, Göbekli Tepe in Turkey and effectively the world’s first public-private finance initiatives that funded 60,000 miles of Roman roads.

Sperber was speaking at the start of the second day of the IPE Real Assets & Infrastructure Investment Strategies Conference, and his potted history of real estate – the most established of the real asset classes – had messages for the future. “The line between real estate and infrastructure will continue to blur as the sector and industry continues to be disrupted,” he said, referring to today’s principal agents of change: technology, demographics and climate change.

In the late-1980s, the London Stock Exchange was at the centre of Britain’s financial deregulation and explosion in its financial services industry, known colloquially as the ‘big bang’. “The question we need to ask ourselves,” Sperber said, “as we stand here right now in the London Stock Exchange, is whether the themes of technological, demographic and societal disruption that are all around us are going to lead to bite-size change, or is real assets currently facing its own big bang and about to become a dominant asset class alongside those more traditional ones.” 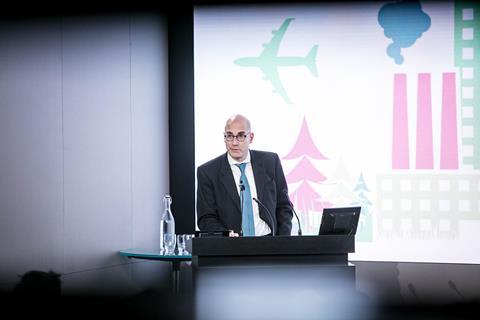 Marcus Sperber, global head of real estate at BlackRock, predicts the lines between real assets will continue to blur

He was to an extent preaching to the converted. The 150 or so delegates were a combination of institutional investors already active in real assets, alongside those seeking to understand them and specialists that may have based their business models on Sperber’s second outcome.

The discussions over the day and a half were invariably about how to gain exposure to real assets in a way that actually works for long-term investors. A big part of that discussion was about whether this should be done through the public or private markets – somewhat fitting given the venue.

There were those that argued that both avenues were valid, but some discussions revealed a more polarised thinking within the investment community.

“We believe listed and private real assets can play a variety of roles in a portfolio,” said Meagan Nichols, global head of real assets at advisory firm Cambridge Associates. Nichols said both could provide different benefits and investors should construct their portfolios depending on the objectives. “Investors seeking growth and income could be well compensated for locking up capital in private strategies, and investors seeking more inflation sensitivity in their portfolios should focus on the more liquid, listed, commodity-linked strategies.”

The New Zealand Superannuation Fund tends to use public and private markets depending on where it identifies the best opportunities to access investments in real assets. Sarah Owen, general Counsel and general manager of corporate strategy at NZ Super Fund, told delegates: “We don’t think about public markets and private markets as opportunities or strategies. We look at those as access points.”

She added: “Ideally what we want is a way of accessing that investment that is low-cost and liquid. If we can get that through the public markets and derivatives, that’s what we do. So we would only go to private markets where we cannot get access to it.” 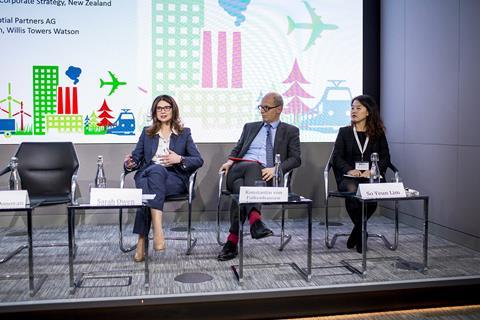 Larry Antonatos, managing director and portfolio manager at Brookfield Asset Management, made the case for blending public and private real assets. He showed that adding the latter to the former improved returns and volatility, delivering better risk-adjusted returns. He said the Sharpe Ratio rose from 0.41 for public real assets and 0.42 for private real assets to 0.49 for a hybrid approach.

Antonatos also questioned the assumption that private real assets rewarded investors with an illiquidity premium. He said this only applied to the best performing private managers; an average private manager will not tend to outperform public managers, meaning such a premium does not exist simply by virtue of investing in private markets over public ones.

And during a panel session moderated by Stephane Degroote, head of ETFs and derivatives business EMEA at FTSE Russell, a live poll of the audience found that 62% invested in in listed real estate, and a similar proportion (63%) defined it as part of their alternatives allocation, rather than their wider equities allocation (37%). The vast majority intended to increase (20%) or maintain (69%) their current allocations over the coming 18 months. Nearly two-thirds (62%) also used listed real assets to fund ‘liquidity sleeves’ within their private real assets allocations.

Ali Zaidi, director of research and indices at the European Public Real Estate Association (EPRA), was not surprised by the results. EPRA argues that listed real estate “should be allocated to as part of a real estate allocation”, he said. “It’s not an option to do either private or listed, it’s more that [listed] complements the strategy. The large Dutch investors have had this strategy for many years – they look at the asset and whether they have to go through the listed route or the non-listed and direct route.”

He added: “We at EPRA definitely think this is the right approach, because in the long run, whether your horizon is even as short as 18 months, you see returns are more correlated to underlying direct commercial real estate than equity markets.” 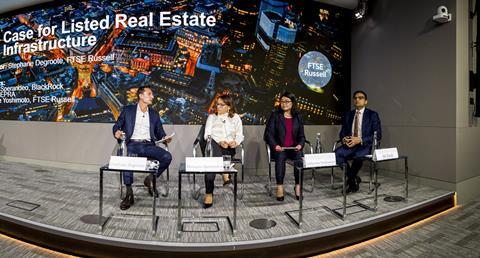 Elsewhere, the debate became more polarised. Jason Zibarras, founding partner of Argo Infrastructure Partners, led a panel discussion about the evolution of institutional investment in infrastructure, which has been dominated by a private markets approach. Since 2002, Zibarras said, the fund management industry for private infrastructure has proliferated from about five general partners to more than 100 today.

While the sector had matured, he was critical of the continuing “overreliance” on internal rate of return (IRR) as a “fundamentally flawed” single-point measure. The shorter-duration, IRR-focused closed-ended fund model is the domain of the private equity market, from which private infrastructure investors had borrowed, he said, “which is really a capital gains approach rather than an income approach”.

James Wardlaw, partner at placement agency Campbell Lutyens, said some fund managers were being innovative to create structures that safeguard against encouraging more short-termist behaviour. “We’ve certainly seen a number of bespoke arrangements where the manager is incentivised to try to maximise the income production or the cash yield without running down the assets,” he said. “I hope that we’ll see more of that because ultimately that’s what a lot of people want from their infrastructure allocations… stable, predictable, long-term cash flows with a bit of inflation linkage.”

Zibarras added: “But it’s only going to happen if investors are able to clearly communicate [what they need] and vote with their feet, because the capital will flow to the managers that do what investors want.”

Wilde later said: “Investors have been bombarded with these hundred GPs all selling them wonderful opportunities, showing them great historical IRRs. Those IRRs don’t reflect their realised returns… I see an industry with fragmented unlisted vehicles with inadequate data and probably the wrong metrics. And I contrast that with a listed market.

“We invented the capital markets in the 19th century to finance infrastructure. And in fact we financed emerging markets infrastructure in the UK. The Argentine railways were built by money raised by the British merchant banks. And we’ve lost that. And I think we I think we’ve lost it, because we picked up a private equity model in 1990s and applied the wrong model.”

However, Zibarras was sceptical that the listed markets offered the solution. “That experiment has been tried and it just does not work, because you introduce a medium of volatility with [little] marginal utility.” That utilty is the ability to exchange on a daily basis.

He pointed to examples of listed utilities or infrastructure funds that have had unexpectedly “perverse incentives” that push management teams to favour earnings accretion rather than cash-flow generation. “Their incentives [can be] linked to share price performance, so you actually introduce short-termism into an asset that has a fundamentally long life,” he said.

“It’s been tried and it hasn’t worked. And personally for long-dated mature infrastructure, I don’t think it works.”