The rise in data streaming is putting pressure on existing networks but boosting opportunities for institutional investors, writes Christopher O’Dea

Despite recent headlines about data breaches at a credit-scoring company and the failure of Silicon Valley’s tech giants to detect Russian-backed online ads, there is no doubt that people and businesses the world over are continuing to create and consume more data. And in today’s smartphone-saturated economy, that means ever more data-streaming across the digital networks, enabling everything from online shopping to selfie posting.

That is good news for institutional investors looking to take a byte out of digital disruption. Data centres and telecommunications towers are the two main infrastructure components required for the smooth operation of cloud-based computing and the wireless communication.

Today, digital infrastructure investment involves more than just buying data centres. In fact, the data in storage centres becomes most valuable when it can be accessed by businesses, via cloud services, allowing them to use vast pools of data to run calculations that can uncover fresh connections in retailing, science, and politics. That is driving the realisation that the telco tower business is an essential component in maximising the value of IT investment across the economy.

“Sectors that are aligned with the new economy build-out around the story of increased online spending or proliferation of data and the increased need to both transport it and store it are benefitting,” says Collin Bell, managing director and client portfolio manager in Goldman Sachs Asset Management’s fundamental equity team.

The benefits are substantial. Listed digital storage equities were up over 30% to October, while telco tower company stocks were ahead by 35%. Secular themes are behind the demand for technology-related infrastructure. Increased mobile data usage continues to drive the need for data transportation, supporting demand for telecommunication tower service, fibre networks, and data storage centres.

Many companies in the digital infrastructure sector offer highly-predictable revenue streams, stemming from long-term rate escalation clauses in contracts and master-lease agreements for their services with tenants that carry strong credit ratings.

International investors are taking note. As much as 85% of telco towers in the US are owned by a listed company, Bell notes, compared with about 15% in the EU and less in Asia. That makes listed infrastructure funds the optimal way for institutional investors to access the sector. But some are pursuing other avenues to get a slice of the massive US telecommunications market, including building new infrastructure or deploying capital to the debt segment of the capital stack. 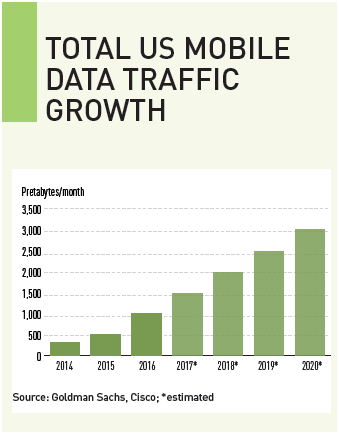 Lendlease, for example, is leveraging its telco business in Japan with SoftBank Group to enter the US market, following SotfBank’s acquisition of Sprint. In September, Lendlease said it planned to add more than 420 new rooftop cell-service towers across the country, citing expected growth in data traffic from driverless cars, new 5G mobile services, and the adoption of ‘internet of everything’ services. IT consultancy Gartner Group has said as many as 310m wearable devices are expected to be sold worldwide in 2017 alone. Lendlease also said it planned to bring multiple tenants to its towers, instead of the two carriers now standard in the industry.

Expansion in the US is proceeding as quickly as a digital signal. To develop, own and operate telecom infrastructure assets in the US, SoftBank and Lendlease have formed a joint venture – Lendlease Towers – to partner with major US telco carriers to build out their infrastructure to meet growing demand for data capacity. The aim is to create a geographically diverse portfolio of rooftop and tower assets through both development and acquisitions, according to a statement from the companies. Lendlease and SoftBank have committed $200m each in initial equity. This capital has been allocated to fund the acquisition and strategic restructure of 8,000 existing US telecom sites, including rooftop installations and other structures. Lendlease Towers will look to take on new capital partners as business grows, and is targeting a portfolio of $5bn (€5.7bn) of telecom infrastructure assets over the medium term.

infrastructure in the US. Established in 2014, Vertical Bridge owns or leases towers, rooftops, billboards, utility attachments and other site assets, which are then leased to telecommunications carriers and other users of wireless technology. The mezzanine facility for Vertical Bridge is designed primarily to support the company’s expansion through mergers and acquisitions, according to AMP. In a transaction announcement, AMP described North American telecommunications infrastructure as “particularly attractive right now”, and predicted “it will be a driver of future growth for our platform”.

While growth is strong, challenges remain. Some valuations are full, and tower revenues may be adversely impacted, for example if M&A activity among telecom service providers caused merged companies to consolidate overlapping tower contracts into a single lease.

For the near term, increasing competition for customers among mobile carriers is expected to provide an additional boost to the secular demand growth that is supporting the economics of digital infrastructure. The big four US carriers are competing fiercely to offer customers the most bytes for their buck. “The consequent resurgence of unlimited data plans is straining carriers’ networks,” according to a new report on the mobile carrier network landscape from consultancy BI Intelligence. The big four have been losing out to “over-the-top” voice and messaging services delivered via online or wireless apps such as Facebook Messenger, WhatsApp and Viber. The scramble to attract customers has sparked a price war, and “revenues are suffering,” the report concludes.

But it is not the case for wireless infrastructure providers who provide the field where carriers compete. Competition among digital service providers benefits owners of digital infrastructure that carry and store data. “More competition generally translates to good dynamics for the tower companies,” says Bell. With wireless device penetration having reached nearly saturation levels in many parts of the world, “the most recent trend is that service is becoming increasingly competitive as providers work to ensure they are offering the best network and the best pricing plans”.

Overall, mobile service carriers are becoming much more competitive on fees and in the services and data capacity offered under any given pricing structure. “The latest trend here in the US is everyone pushing towards unlimited data, and while that’s arguably a negative factor for the wireless companies, it’s a positive trend for the tower companies,” Bell says. “It means people are going to consume that much more on their phones, and therefore create more data that needs to be transported between one tower and the next.”

The massive growth of wireless communication has spawned another investment opportunity, this one most likely to find a home in the credit bucket of a fixed-income allocation. Wireless service providers have begun issuing asset-backed securities based on pools of mobile-phone service contracts with their customers. In a world where Uber and Lyft strive to dominate the business of arranging rides through their respective smartphone apps, the smartphone may be as essential an asset as any other piece of infrastructure – and potentially a better credit risk.

Some issuers are betting on just that, and they are using the agreements between consumers and mobile-phone service providers as collateral for a new type of asset-backed security (ABS). Verizon Communications, through its wireless subsidiaries, has issued four device payment-plan agreement securitisations, known as DPPs. Each ABS is issued by a discrete trust, and the assets in each trust have typically included agreements with a 24-month original term, and remaining life of 20 to 22 months, according to presale analysis reports by Fitch Ratings.

Mobile-phone contract ABS face greater exposure than other consumer loan transactions to the credit profile and market position of the parent, according to Fitch, since Verizon Communications and its subsidiaries act as contract originator, loan servicer, and network operator.

The worst case, of course, is insolvency of the issuer. While that appears remote – Fitch currently rates Verizon A-minus with a stable outlook – the digital dimension brings some new risks. The primary direct exposure facing investors is the risk of payments related to smartphone upgrades not being made to the trust in the event of Verizon’s insolvency. A good sign for investors – the size of that exposure seems to shrinking. On the most recent Verizon issuance in June, Fitch cut its assumed upgrade loss rate. “A smaller portion of the customer base is comprised of those who prioritise frequent upgrades over the cost savings associated with retaining their devices,” Fitch wrote.

While there may be churn between carriers, the key message for investors in digital infrastructure is that the size of the pie is growing.

Consumers spend more than half of their digital time on smartphones, compared with a third on PCs, according to BI Intelligence. That shift has “effectively placed telecoms at the front door of consumers’ digital experience”, the consultancy says. “Consumers’ growing dependence on smartphones and data means telecoms are now better positioned than ever to play a bigger role in their subscribers’ lives.”

While carriers’ competition for market share could cause idiosyncratic issues at some companies, secular trends promise to multiply the amount of data being stored and the frequency with which consumers and businesses alike transmit data across networks. Potential adoption of autonomous vehicles, for example, may create new demand for distributed fibre and small cell radio access nodes, and the rise of 5G mobile networks may require additional telco infrastructure to support higher densities of mobile broadband users. Digital infrastructure investors, says BI Intelligence, should be “preparing for the next wave of disruption, including connected cars, augmented reality, and 5G”.