3
The Investor: IFM and the ‘pension-public’ partnership
Asian Investors

The Investor: IFM and the ‘pension-public’ partnership

Australian manager IFM Investors is looking to export its PPP model to the US. Florence Chong speaks to Brett Himbury

When Mike Pence visited Australia in April, he spoke of infrastructure, telling business leaders that US President Donald Trump’s administration was keen to emulate the Australian model of asset recycling. The US vice-president said he had personal experience of the benefits of privatising public assets during his term as governor of Indiana.

Three years ago, Indiana State sold its Indiana Toll Road to Melbourne-based IFM Investors for $5.7bn (€4.7bn). IFM chief executive Brett Himbury, who met Pence through that transaction, says IFM has since spent some $270m, mostly on new technology, along with surfacing to improve safety along the 157km stretch of highway.

“Under our ownership, over three years we have invested more than was spent in the first 50 years of the Indiana Toll Road’s life,” says Himbury.

The results show. Incidents on the road have dropped 30% and usage has risen, thanks to smoother traffic flow. This means there is no need to increase toll fees, Himbury says.

During his Australian visit, Pence said President Trump was interested to “do more of this” as part of a $1trn upgrade of America’s ageing infrastructure. He cited New York’s LaGuardia Airport as one example of an asset that could be redeveloped with an injection of private funds.

In his conversations – with Pence and other US parties – Himbury is at pains to differentiate pension capital from other forms of private capital. “It is Main Street, not Wall Street. It is committed, long-term capital,” he says, repeating the term he coined, “pension-public partnership” – a pun on private-placement partnerships. 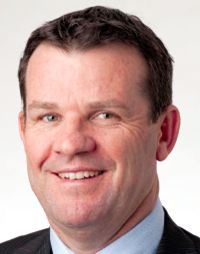 “The toll road is an example of a pension-public partnership where long-term responsible workers’ capital is being used to improve the value of that capital – but also to create jobs for workers, to improve safety for users and workers and so on.

“It is an approach admired by both the public and the political class, and that, we hope, will give us the social licence to do much more [in the US].”

Himbury stresses that the capital also includes domestic US capital because 80 US public state pension funds, including several of the top 10, invest with IFM, which has more than AUD90bn in assets under management. Last year it sold a 10% stake in the Indiana Toll Road to the California Public Employees’ Retirement System (CalPERS), along with an unspecified interest to US insurer Allstate.

So far this year, Himbury has been to the US four times. IFM’s office in New York, established a decade ago, has a staff of 50, who work with US officials at all levels to pitch the benefits of pension-public partnership.

“We have been very focused on sharing our experience and our expertise, and in attempting to ensure that PPP is well understood,” Himbury says. “It is a unique, valuable source of capital that supports society and workers as well as our investors. They can see the benefits to themselves, not just to an esoteric group of so-called investors. In our case our investors are members of global pension funds in the US, Australia and elsewhere.”

As well as engaging with Mike Pence and the Washington establishment, bureaucracy and US unions during their most recent visit to the US (in July), Himbury and his super fund colleagues saw the governors and treasurers of seven US states.

“Our proposition is that we invest in brownfield in partnership with the governments. They give us long leases as part of the partnership and they will then have the capital to recycle into new social and economic infrastructure,” Himbury says.

When it comes to large infrastructure projects, he adds, governments are arguably better placed to take on greenfield risks. Selectively, however, IFM does invest in greenfield projects. In 2013, IFM provided US$1.3bn to fund construction of Freeport LNG’s second terminal in Texas. It has since injected a further US$1.1bn into the project.

“Construction is on time and on budget,” Himbury says. “The facility will export LNG  [liquefied natural gas] to parts of Asia when completed in around 24 months’ time. During the peak of construction, the project employed 6,500 Americans.”

Himbury says how the Australian proposition has been received varies from state to state, depending on their experience with PPPs, along with the legislative and political environment. “Generally, however, the states understand the uniqueness of pension money versus Wall Street money.”

Himbury says the US has its municipal (muni) bond market as a source of funding for state and municipal governments, but most US states are constrained in their capacity to access this market.

“Many face a funding gap. Their infrastructure funding needs could run to US$9bn, and they might have the ability to borrow only one or two billion. The muni bond market clearly has a role. But pension capital can provide a complementary long-term form of differentiated capital in addition.”

He believes the Australian PPP story is gaining traction, as IFM, along with the wider Australian super industry, supported by the Australian government, continue to reinforce their message with repeat visits.

Australian delegations have included former deputy prime minister Mark Vaile, now a board member of HostPlus, an industry super fund, and former New South Wales state premier Mike Baird, who speaks of his asset recycling programme in the Australian state from a political perspective – delivering jobs and growth and investing in infrastructure by accessing pension and private capital in Australia.

On a recent trip to the US, Australia’s Ambassador to the US, Joe Hockey, participated in the discussions, speaking of how, as Federal Treasurer, he had brought in an incentive scheme to encourage state governments to privatise infrastructure assets. Canberra offers a 15% incentive to states to sell assets and deploy the proceeds into building new roads and hospitals.

Ideally, in addition to political support, Himbury says, if the US federal government can offer economic support like an incentive to the states, it would encourage them to carry out much-needed infrastructure improvement.

Himbury says that if  a deal in the US does come off, IFM has “several billions” of dollars available to deploy into the US infrastructure market.